Republicans and Democrats have sharply different views about America’s role in the world and on some key questions  — such as whether the U.S. is more or less respected than in the past — their opinions depend on whether their party controls the White House, according to a new Pew Research Center survey released this week. 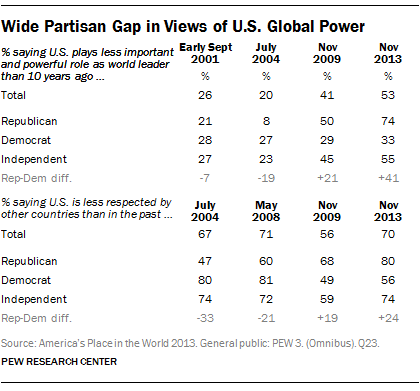 About three-quarters (74%) of Republicans surveyed in November said the U.S. now plays a less important and powerful role as a world leader than 10 years ago —more than the overall public (53%) and far more than Democrats (33%).

The partisan gap on whether the U.S. is less respected in the world than in the past is smaller than the gap on the question about the U.S. as a world leader: Eight-in-ten Republicans hold that view compared to 56% of Democrats. But the survey shows a big shift in sentiment among Republicans and Democrats over the years depending on whose party held the White House. 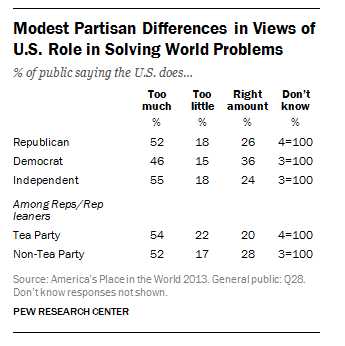 When it comes to America’s role in the world, there is one prominent area where partisan differences are relatively small. About half (51%) the overall public  believed the U.S. does too much in terms of helping solve world problems compared with 17% who think it does too little and 28% say it does about the right amount. 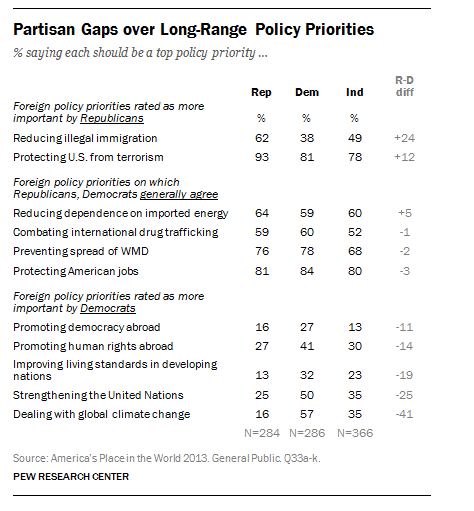 On priorities important to them, Democrats also favor strengthening the United Nations by 25 points more than Republicans and back efforts to improve living standards in developing countries by 19 points more. When it comes to issues most important to Republicans, their biggest gap with Democrats is over the priority to put on reducing illegal immigration. The share of Republicans considering that a priority is 24 points higher than that of Democrats.