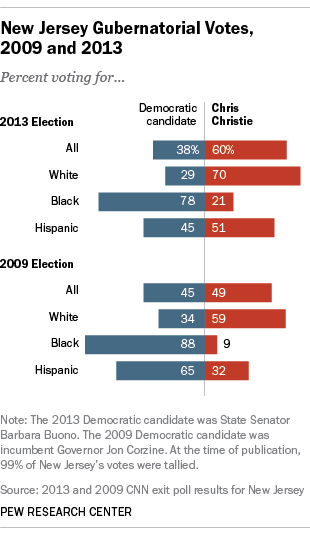 In his landslide re-election victory last night, New Jersey Republican Governor Chris Christie carried 51% of the Latino vote, a 19 point increase from his performance in 2009, according to exit polls.

Christie’s showing among Latinos came despite some strong headwinds for the GOP among this demographic group. In the 2012 presidential race, Republican candidate Mitt Romney won just 27% of the Hispanic vote nationally.  In 2008, Republican John McCain won 31% of the Latino vote.

The Latino vote is growing in importance across the nation. Today, more than 23 million Latinos are eligible to vote, and a record 11.2 million voted in 2012.

Latino voters have leaned more towards the Democrats and supported Democratic presidential candidates in growing shares. Last year, President Obama won an overwhelming 71% of the Hispanic vote, a modest increase from the 67% he won in the 2008 election.