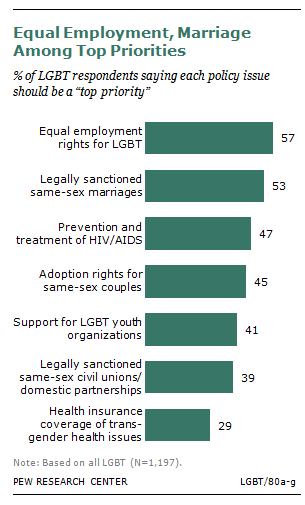 The Employment Non-Discrimination Act, or ENDA, is a bill that prohibits discrimination in employment on the basis of sexual orientation or gender identity, with exemptions for small businesses and religious institutions. ENDA has often been put before Congress since the 1970s in some form, with the gender identity clause added in 2009.

It has never passed both houses of Congress, but Senate Majority Leader Harry Reid plans to bring it up again this week for a vote.

A Pew Research Center survey of 1,197 lesbian, gay, bisexual and transgender adults conducted this spring found that workplace discrimination is one of the most important policy issues in the LGBT community, with 57% of LGBT adults saying that equal employment rights should be a “top priority.”

When it comes to transgender respondents in the survey, there was too small a sample to generate statistically significant findings about their views as a group. But in an open ended question asking what were the most important problems facing lesbian, gay, bisexual and transgender people today, many of the transgender individuals surveyed brought up legal rights and discrimination. A 62-year old transgender respondent identified the most important problem as “equality in employment, housing and marriage.” 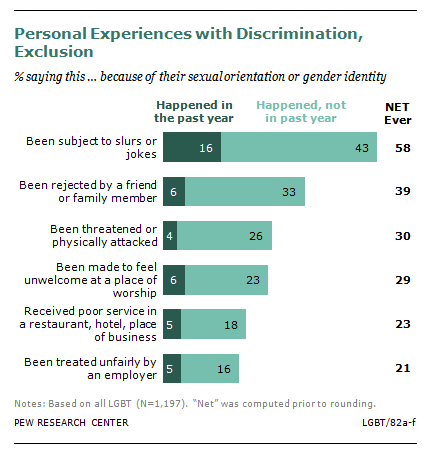 Although equal employment rights is seen as one of the top policy issues in the community, relatively few LGBT adults report experiencing workplace discrimination directly, compared with some other forms of discrimination and exclusion. About one-in-five (21%) say they have been treated unfairly by an employer because of their sexual orientation or gender identity, (5% say this happened within the past year and 16% report that this happened but not within the past year). The experiences of different groups in the LGBT community vary: 26% of gay men, 23% of lesbians and 15% of bisexuals say that they have been treated unfairly by an employer.

The LGBT population overall is more likely to earn a lower annual family income, with 39% earning less than $30,000 (compared with 28% of the U.S. general population) and 20% earning $75,000 or more (compared with 34% of the U.S. general population). This is likely due, in part, to the fact that the LGBT population tends to be younger than the general public and that they are less likely to live in family households, which usually earn more than other households.

Apart from discrimination in employment, the LGBT population says they have not yet achieved social acceptance. Some 39% of the general public says there is “a lot” of discrimination against gays and lesbians in our society today, compared with 53% saying the same among the LGBT community. Only 8% of LGBT adults say there is “only a little” discrimination or “none at all.”

Certain members of the LGBT community are seen as more accepted by society than others. Lesbians, bisexual women and gay men are generally seen as being more accepted (33% of LGBT adults say there is “a lot” of social acceptance for bisexual women, 25% for lesbians and 15% for gay men).