Much has been written about newspapers cutting staffs, news pages and bureaus in response to financial pressures in recent years. But a growing number of dailies also have reduced the amount of newsprint they devote to editorials and commentary, a departure from tradition that has gone largely unnoticed outside the affected communities.

The latest and perhaps most prominent example is the Philadelphia Inquirer, which announced in September that it was cutting in half—from two to one—the number of pages allotted to editorials and opinions on weekdays, triggering protests. There is no formal tally of reductions in editorials and commentary, but Pew Research Center interviews with editors across the country have confirmed a gradual shift both in the amount of space given over to opinion and in the missions of editorial and op-ed pages. Some papers have tried to compensate by running more editorials and columns online and launching more opinion-driven blogs. Some have shifted away from one of the historic missions of newspapers—influencing public opinion—and instead seek to foment community conversations online. 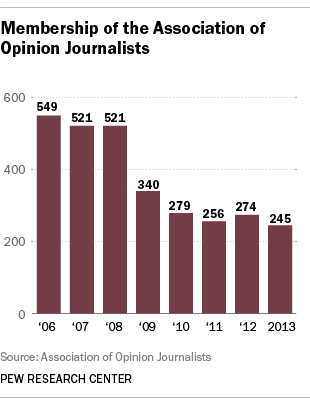 “The trend over the last dozen years or so is that editorial departments have lost space and personnel,” said Bob Davis, associate publisher/editor of The Anniston (Ala.) Star, which has cut one opinion page per week. “People are looking at themselves less as being an editorial voice and more as being a stimulator of conversation.”

One telling sign of the cutbacks is membership in the Association of Opinion Journalists, the organization that represents editorial writers and columnists. In 2006, before most newspaper downsizing took place, the AOJ had 549 members. Since then, membership has plunged 55%, to 245 this year.

Some examples of this changing landscape: