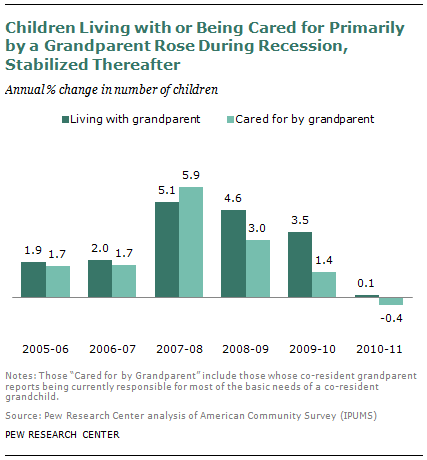 A Pew Research Center analysis of Census data found that 7.7 million U.S. children — about 10% of all children in the country — were living in the same household as at least one of their grandparents in 2011, and for 3 million that grandparent also was their primary caregiver. Both trends stabilized at higher level after the recession’s official end in mid-2009.

In most cases (71%), grandchildren living with a grandparent are actually living in the grandparent’s household. This share rises to 94% among those children who are also being cared for primarily by a grandparent.

Rather, these new multigenerational households likely are a byproduct of people losing their jobs, homes or both during the downturn. That shouldn’t perhaps come as much of a surprise: A previous Pew Research analysis found recent increases in the share of young adults living in their parents’ homes; another Pew Research study documented general increases in multi-generational households, and other researchers have pointed to increases in cohabitation that have occurred in recent years as well.