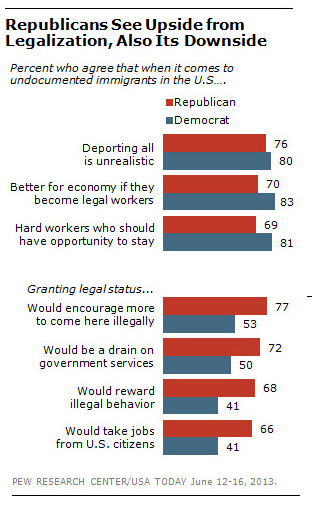 Republicans see benefits – as well as costs – from legalization. Our June survey found that a large majority of Republicans (70%) think it would be better for the U.S. economy if undocumented immigrants became legal workers. About as many (69%) said undocumented immigrants are “hard workers who should have an opportunity to stay” in the United States.” And fully 76% say it would be unrealistic to deport everyone in the country illegally.

Yet substantial percentages of Republicans also see potential downsides from granting undocumented immigrants legal status: 77% say it would encourage more people to come to the U.S. illegally and 68% think it would reward illegal behavior. Most also say legalization would drain government services (68%) and cost U.S. jobs (66%).

As many Republicans as Democrats say they’d vote for a law that allowed unauthorized immigrants to eventually become citizens provided that they first fulfill a list of requirements. A Gallup poll conducted June 15-16 found that 86% of Republicans – the same percentage as that of Democrats, said they would back legislation allowing immigrants living illegally in the U.S. to become citizens after a long waiting period if they paid taxes and a penalty, passed a criminal background check, and learned English. The New York Times noted that polls that describe the many requirements an unauthorized immigrant would have to satisfy before gaining citizenship find higher GOP support than polls that do not mention the requirements in detail, or at all. 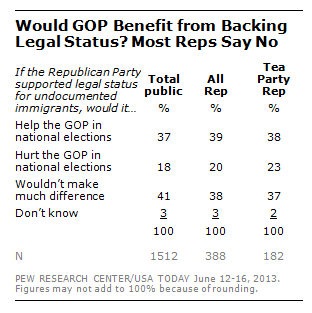 But rank-and-file Republicans are dubious. Only about four-in-ten (39%) say GOP support for legalization would help the party in national elections, 20% say it would hurt the party and 38% say it would not make much difference. 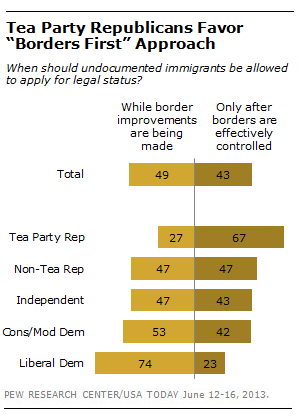 On border security, timing is everything, but there are divisions within the Republican ranks. Republicans and Democrats are on opposite sides of the issue when it comes to whether securing U.S. borders must precede allowing undocumented immigrants to seek legal status. A majority (56%) of Republicans say improved border security must come first, while 60% of Democrats say providing a path to legal status can occur while border security is being beefed up.

However, some of the same divisions that have emerged among Republicans on Capitol Hill, are also on display on this issue.