The announcement in late May by Hezbollah leader Hassan Nasrallah that the Lebanese militant group would join in the fighting in Syria on the side of its president, Bashar al-Assad, sent fears through the Middle East that the conflict would spill over into other countries. 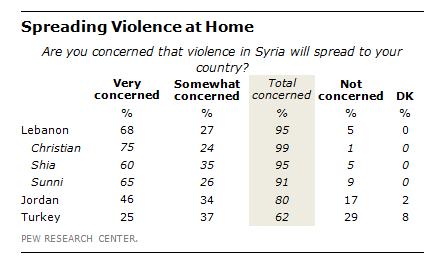 Those fears had existed even before Nasrallah spoke. A Pew Research Center survey conducted in March found deep concerns in the region about the spread of violence, particularly in the two countries that share a border with Syria – Lebanon and Jordan. About two-thirds (68%) in Lebanon said they were very concerned about the possibility and another 27% said they were somewhat concerned. Six-in-ten or more of all Lebanon’s major religious groups – Shias, Sunnis and Christians – described themselves as very concerned.

In Jordan, 46% of the public was very concerned and another 34% were somewhat concerned.

Hezbollah’s constituency is Lebanon’s Shia population and the group depends on the financial backing of Iran, another Syrian ally, and on Syria itself which has provided a pipeline for Iranian support and has long been involved in Lebanon’s politics. 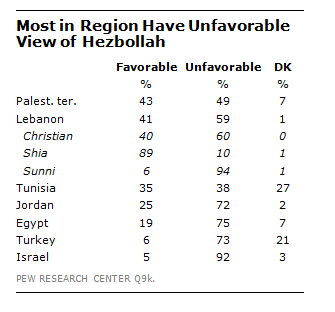 Hezbollah is widely unpopular in the region, according to the March survey. Israel has the most negative view with 92% of its public seeing Hezbollah unfavorably, but solid majorities in several nearby predominantly Muslim countries also see Hezbollah unfavorably: Egypt (75%), Turkey (73%), Jordan (72%) and Lebanon (59%).

In Tunisia, 38% have an unfavorable view of Hezbollah and 35% have a positive one, with 27% expressing no opinion.

Within Lebanon, which presumably has the most at stake in the possible spread of the Syrian conflict, opinion is divided among the three largest religious groups. About nine-in-ten Shia (89%) see Hezbollah favorably while 94% of Sunnis – whose sympathies in the Middle East tend to reside with the Syrian rebels – regard Hezbollah unfavorably. Six-in-ten of the Christian population have an unfavorable view of Hezbollah. (Shias and Sunnis each comprise about 27% of the population, while Christians account for 41%).

Beirut bombings follow fears of Syrian war fallout
In countries near Syria, widespread fear about the spread of violence, extremists
In nations with significant Muslim populations, much disdain for ISIS
6 facts about religious hostilities in the Middle East and North Africa
Before Soleimani's death, concerns about Iran had fallen in many countries – including the U.S.