As of March 2010, 11.2 million unauthorized immigrants were living in the United States, virtually unchanged from a year earlier, according to new estimates from the Pew Hispanic Center, a project of the Pew Research Center. This stability in 2010 follows a two-year decline from the peak of 12 million in 2007 to 11.1 million in 2009 that was the first significant reversal in a two-decade pattern of growth. 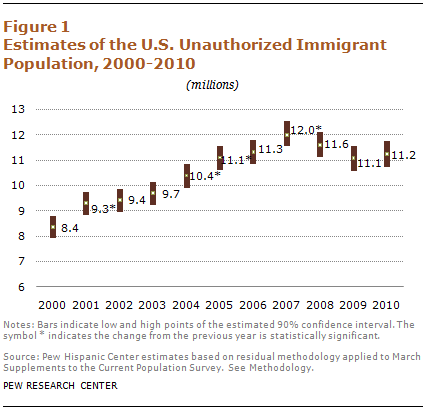 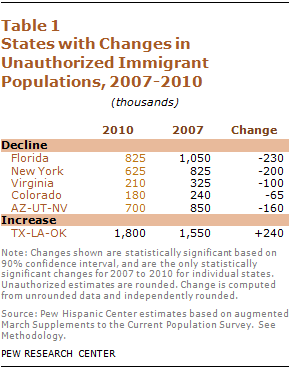 The number of unauthorized immigrants may have declined in other states as well, but this cannot be stated conclusively because the measured change was within the margin of error for these estimates.

Despite the recent decline and leveling off, the number of unauthorized immigrants living in the United States has tripled since 1990, when it was 3.5 million. The size of this population grew by a third since 2000, when was 8.4 million.

Because these estimates are derived from sample surveys, they are subject to uncertainty from sampling error, as well as other types of error. Each annual estimate of the unauthorized population is actually the middle point of a range of possible values that could be the true number. Additionally, the change from one year to the next has its own margin of error.

Because of the margin of error in these estimates, two numbers may look different but cannot be said definitively to be different. For example, there is no statistically significant difference between the estimate of the unauthorized population for 2009 (11.1 million) and the estimate for 2010 (11.2 million). Similarly, some state estimates for single years are based on small samples; especially in less populous states, two single years should not be compared.

These ranges represent 90% confidence intervals, meaning that there is a 90% probability that the range contains the true value.

Although the estimates presented here indicate trends in the size and composition of the unauthorized-immigrant population, they are not designed to answer the question of why these changes occurred. There are many possible factors. The deep recession that began in the U.S. economy in late 2007 officially ended in 2009, but recovery has been slow to take hold and unemployment remains high. Immigration flows have tended to decrease in previous periods of economic distress.

The period covered by this analysis also has been accompanied by changes in the level of immigration enforcement and in enforcement strategies, not only by the federal government but also at state and local levels. Immigration also is subject to pressure by demographic and economic conditions in sending countries. This analysis does not attempt to quantify the relative impact of these forces on levels of unauthorized immigration.

Read the full report at pewresearch.org/hispanic.