The share of the American adult population that is middle income is falling, and rising shares are living in economic tiers above and below the middle. The hollowing of the middle has proceeded steadily for four decades, and it may have reached a tipping point. Once in the clear majority, adults in middle-income households (based on the definition of “middle income” used in this report) in 2015 were matched in number by those in lower- and upper-income households combined.

The analysis also finds that the movement out of the middle has not simply been at the margins – the growth has been at the extreme ends of the income ladder. The shares of adults living in lower-middle income or upper-middle income brackets are relatively unchanged since 1971. Meanwhile, the fastest-growing numbers are in the very lowest and very highest income tiers.

The diminishing size of the middle is not all bad news, however. The share of U.S. adults living in both upper- and lower-income households rose from 1971 to 2015, but the share in the upper-income tier grew more. On balance, there is more economic progress than regression.

These findings emerge from Pew Research Center’s analysis of data from the Census Bureau’s Current Population Survey for 1971 to 2015. The specific data analyzed are from the Annual Social and Economic Supplement, conducted in March of each year, in which respondents provide household income data for the previous calendar year.16 For this reason, adults who were surveyed in a given year are classified as lower, middle or upper income based on their household income in the previous year. In this report, income data refer to the 1970-2014 period and the demographic data from the same survey refer to the 1971-2015 period.

What it takes to be middle income has changed over time 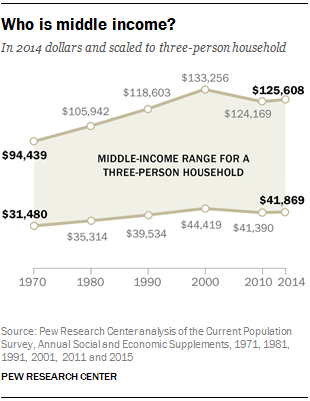 Because overall median household income in the U.S. has changed over time, the minimum amount it takes to be middle income has also changed. As shown in more detail in section 4, household incomes overall increased from 1970 to 2000 and then fell thereafter. The setbacks since 2000 may be traced to two recessions – the 2001 recession and the Great Recession of 2007-09 – and the slow economic recoveries after each.

How many adults are middle income? 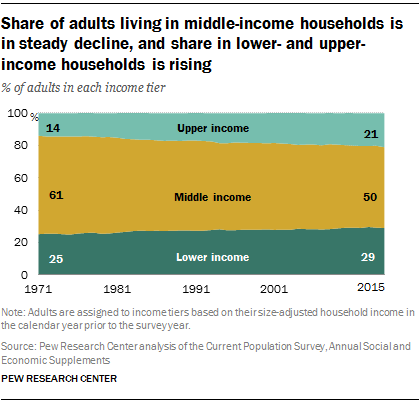 The share of adults who live in middle-income households has fallen since 1971. In 2015, 50% of American adults were middle income, compared with 61% in 1971. The shrinking of the middle has been a steadily ongoing process, through the ups and downs of the U.S. economy.

In terms of numbers, American adults who lived in middle-income households in 2015 were matched by those who did not. Of the total adult population of 242.1 million in 2015, 120.8 million were middle income and 121.3 million were either low income or upper income. By contrast, in 1971, the 80 million middle-income adults greatly outnumbered the other 51.6 million adults.18 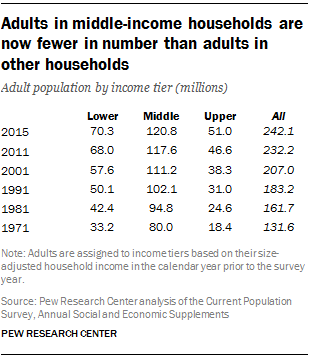 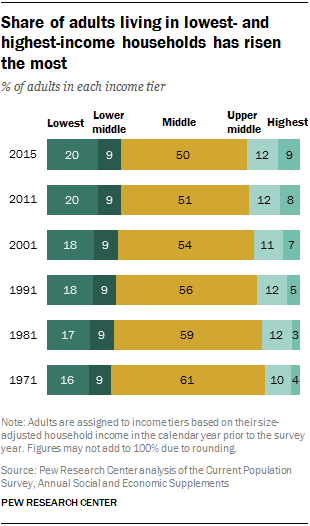 In 2015, 20% of U.S. adults lived in the lowest-income households, compared with 16% in 1970. Just 9% of the adult population lived in lower-middle income households in 2015 and 1971. Thus, the growth in the nation’s lower-income tier was concentrated at the very bottom.

Mirroring the change at the low end of the distribution, the growth of the upper-income adult population skews to the very top. The share of adults in highest-income households more than doubled, from 4% in 1971 to 9% in 2015. Meanwhile, the increase in the share of adults in upper-middle income households was more modest, from 10% in 1971 to 12% in 2015.

The American Middle Class Is Losing Ground
1. The hollowing of the American middle class
What it takes to be middle income has changed over timeHow many adults are middle income?A closer look at the rise of lower- and upper-income populations
2. Changes in income status vary across demographic groups 3. Middle-income adults largely reflect the nation's demographics 4. Middle class incomes fall further behind upper-tier incomes 5. Wealth gap between middle-income and upper-income families reaches record high Acknowledgments Methodology Appendix A: References