For Hispanics living in the United States, Hispanic identity is multidimensional and multifaceted. For some, it is defined most by their family’s country of origin, such as Mexican, Cuban or Dominican.48 For others, it is defined by pan-ethnic terms like Hispanic or Latino, emphasizing the commonalities of a diverse community.

At 54 million, Hispanics make up 17% of the nation’s population, and they are projected to grow to be 29% of the U.S. population in 2060, according to the Census Bureau.49 Between 1990 and 2013, the nation’s Hispanic population grew faster than any other racial or ethnic group.

Measuring racial identity among Hispanics has proved challenging for the Census Bureau. Currently, the Hispanic category is described on census survey forms as an ethnic origin and not a race. It is asked about separately from the race question, a practice also followed by many other surveys.

But when it comes to their racial identity, Latinos stand out from other Americans in their responses to race questions. For example, when asked about their race on Census Bureau decennial census and survey forms, many Latinos do not choose one of the standard racial classifications offered. Instead, more than any other group, Latinos say their race is “some other race,” mostly writing in responses such as “Mexican,” “Hispanic” or “Latin American.” Some 37% of Latinos did this in the 2010 census, as did 42% in the 2000 census.50 This is also the case on Pew Research Center surveys of Latinos. In the 2014 National Survey of Latinos, 25% of Latinos volunteered that their race is “Hispanic” or “Latino” and not one of the standard racial classification groups.

This finding has implications for how multiracial Latinos are identified. For example, Latinos who identify themselves as one race (such as white or black) when asked to fit themselves into the country’s current standard racial categorization, but then say they consider being Latino as part of their racial background as well, have effectively indicated a multiracial background. That makes this group of Latinos potentially part of the mixed-race population. Taking this broader view of the multiracial population, including Latinos who give one census race and also consider their Latino background part of their race would raise the U.S. multiracial population share to 8.9% from 6.9%.

This chapter incorporates this broader approach to Hispanic racial identity, exploring two possible ways to define and view definitions of mixed-race background among Hispanics: (1) those who say they are two census races (i.e., white and black) and are also Hispanic, a group consistently treated as multiracial throughout the report; and (2) those who name only one race (other than Hispanic), but also say they consider their Hispanic background to be part of their racial background. The chapter also explores other Hispanic racial identities, such as an Afro-Latino background and a background that includes roots among the indigenous peoples of the Americas, such as Native American, Maya, Taino or Quechua. These latter findings come from the Pew Research Center’s 2014 National Survey of Latinos.

I’ve never identified as a single race. I think partly that would be insulting to my parents because it would be leaving one or the other out.White and Hispanic woman, age 23

Who Considers Being Hispanic a Race? 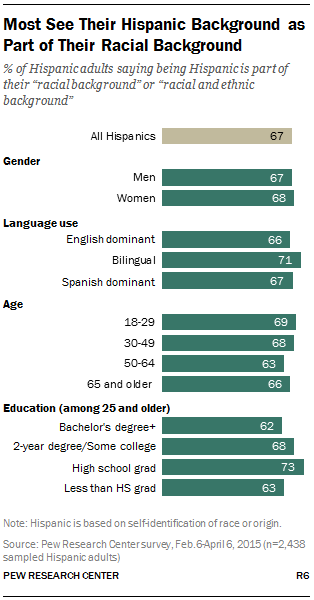 As noted, multiracial identity among Hispanics can be defined in two ways. The first definition matches that used throughout this report—multiracial adults are those who say the racial background of themselves, their parents or their grandparents includes two or more census races, regardless of whether they see their Hispanic background as a race. By this definition, 4.6% of adults who are Hispanic (or have a Hispanic parent or grandparent) have a multiracial background.53

The Multiracial Experience and Latinos

Do Hispanics with Multiple-Race Backgrounds Consider Themselves to Be Mixed Race? 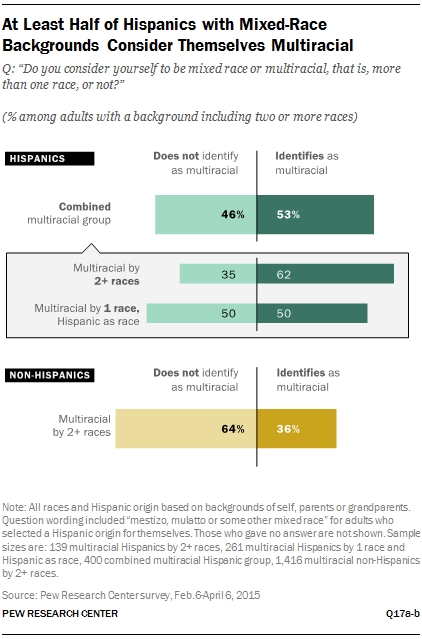 How Multiracial Hispanics Think Others See Them

For example, among multiracial Hispanics who indicate their background includes two or more census races, 30% say most people would think they are white if they passed them on the street. An additional 24% say most people would see them as Hispanic, 17% as mixed race, 10% as black only and 4% as American Indian only.

However, for multiracial Hispanics who choose one census race but say they consider their Hispanic background to also be part of their racial background, the survey’s findings are very different. About half of these multiracial Hispanics (48%) say most people would think they are Hispanic if they passed them on the street. An additional 38% say they would be seen as white by most people, and just 8% say they would be seen as mixed race. About half of this group (48%) chooses white when asked about their own race, so it’s not surprising that about four-in-ten believe others see them as white.

Is a Multiracial Background an Advantage or a Disadvantage?

Most Hispanic Multiracial Adults Have Felt Pride in Their Background

In the sections above, we looked at what it would mean to consider a Hispanic background a racial one. This reflects what many Hispanics themselves write in on the decennial census form and other surveys when they enter “Hispanic” or “Latino” or a Hispanic origin (such as Mexican) when asked to provide their race. It also leads to about one-in-six Hispanics being identified as mixed race, even though many would not adopt that term to describe themselves.

But other recent Pew Research Center work suggests that even this broader approach to race doesn’t capture the full depth and wide spectrum of views that Hispanics have of their own racial identity. This is in part because grouping together diverse communities and nationalities into a single group masks many of the differences among them.54 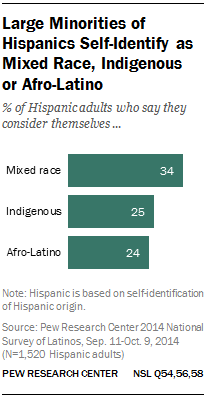 In the 2014 National Survey of Latinos (NSL), we approached Latinos’ views of race with an eye toward the specific ways that national and regional origin affects this view. Specifically, in that fall 2014 survey of 1,520 Latino adults,55 we asked about racial background in three ways by asking respondents if they consider themselves Afro-Latino or Afro-Caribbean or, for example, Afro-Mexican. Similarly, we asked Latinos if their background includes roots among the indigenous peoples of the Americas, such as Native American, Mayan, Quechua or Taino. Finally, we also explored mixed-race identity among Latinos using mixed-race terms such as mestizo or mulatto, terms that are used in countries like Mexico to capture a mixed indigenous and European heritage. We asked respondents these questions about their own background and that of their parents and grandparents.56

Note: For more detail on these questions and the exact phrasing, see 2014 National Survey of Latinos topline in Appendix D.

These results shed light onto the multidimensionality of racial identity among Latinos and the challenges in capturing Hispanic racial identity through a standard race question.

The 2014 National Survey of Latinos (NSL) identified mixed-race Hispanics in two ways. On the one hand, the NSL directly asked Hispanic adults whether they considered themselves to be mixed race, as mentioned in the chapter and in the box in this chapter. On the other hand, the NSL included the Pew Research Center’s standard race question for telephone interviews, which allowed for multiple responses to race and also allowed respondents to volunteer their race as Hispanic/Latino or mixed-race. It also captured any other race responses given by the interviewee.

Based on the standard Pew Research race question, Hispanics identified as mixed-race includes Latinos who volunteered that they were “mixed race,” “mestizo,” “mulatto” or some other mixed race or gave any two responses (including “Some other race” without specifying which race that was or volunteering “Hispanic or Latino” or a Hispanic origin as their race) to the standard NSL race question.

Which of the following describes your race? You can select as many as apply… White, Black or African American, Asian or Asian American or some other race.

Interviewers accepted up to four responses. They coded them in the respective categories following Pew Research instructions and recorded verbatim responses for “Some other race” and “Hispanic or Latino” mentions. The survey provider (SSRS) and Pew Research Center reviewed and verified these classifications and corrected some responses to the race question as needed.

Using this procedure, mixed-race Hispanics identified in the NSL race question may include people who said they were “white and Mexican” or “black and Latino and Dominican” or “Irish and Mexican.” Hispanic origin combinations such as “Puerto Rican and Cuban” are not counted as mixed race. In a few cases, when a verbatim response captured by interviewers was not clear, Pew Research used other survey questions, such as whether people considered themselves to be mixed race (Q54) and whether the respondent had a mixed Hispanic and non-Hispanic background through their parents and grandparents (Q52a, Q52b and Q53) to classify them as mixed-race or not.

For more on the survey’s methodology, see https://www.pewresearch.org/hispanic/2014/10/29/appendix-b-national-survey-of-latinos-methodology/

Next: About This Report
← Prev Page
Page1Page2Page3Page4Page5Page6Page7You are reading page8Page9Page10Page11
Next Page →

Learn About the U.S. Census in our Email Mini-Course