Language use among Hispanics in the U.S. reflects the trajectories that previous immigrant groups have followed. Immigrant Hispanics are most likely to be proficient in Spanish, but least likely to be proficient in English. In the second generation, use of Spanish falls as use of English rises. By the third generation, English use is dominant (Pew Hispanic Center, 2009; Hakimzadeh and Cohn, 2007; Pew Hispanic Center, 2004). Results from the Pew Hispanic survey reflect these patterns.

Even so, while English use among Latinos is higher in later generations and Spanish use is lower, Spanish use persists among the third generation. In daily activities such as listening to music, watching television or even thinking, significant shares of third-generation Latinos use Spanish, the Pew Hispanic survey shows.

According to the survey, fully 87% of Hispanics believe Hispanic immigrants need to learn English to succeed in the U.S. But at the same time, nearly all (95%) Hispanic adults believe it is important for future generations of Hispanics in the U.S. to be able to speak Spanish.

The Value of English and the Importance of Spanish 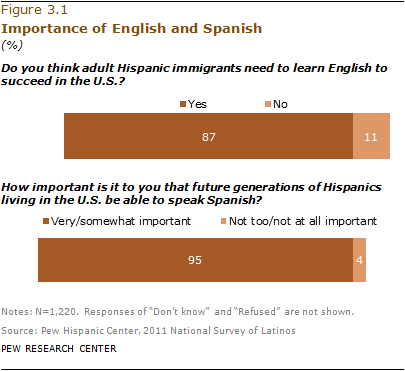 Latinos see both English and Spanish as important, though in different ways.

When it comes to Spanish, fully 95% of Latinos say it is either very important (75%) or somewhat important (20%) that future generations of Latinos living in the U.S. speak Spanish. Nearly all Latinos, regardless of generation, agree on this point. These findings may reflect a recent shift in priorities among Hispanics. According to the 2009 National Survey of Latinos, today’s young Latinos are encouraged to speak Spanish more so than their parents were when they were young (Pew Hispanic Center, 2009).

Language Use among Hispanics

Even though nearly all Hispanics say it is important that future generations of Hispanics speak Spanish, Spanish proficiency and use is lower in later generations, while English use is higher. 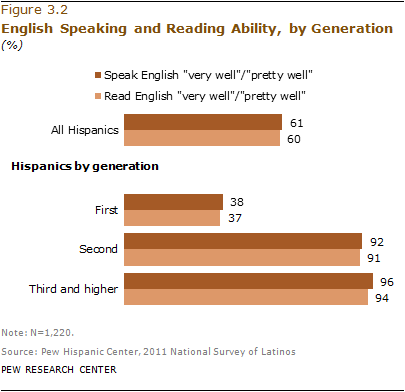 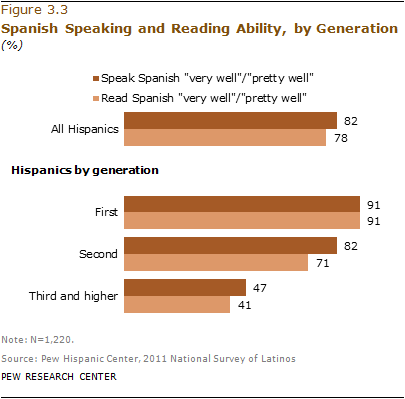 When it comes to the ability to speak and read Spanish, overall a greater share of Hispanic adults say they are proficient in Spanish than say they are proficient in English. According to the survey, more than eight-in-ten (82%) Hispanic adults say they can carry on a conversation in Spanish “very well” or “pretty well. Nearly as many (78%) say they can read a newspaper or book in Spanish either “very well” or “pretty well.”

The survey also finds that the level of Spanish proficiency diminishes in later generations. More than nine-in-ten foreign-born Latinos say they can speak and read in Spanish “very well” or “pretty well.” For the second generation—the U.S.-born children of immigrants—the share saying they can carry on a conversation in Spanish falls to 82%, and the share saying they can read a newspaper or book in Spanish falls to 71%. Among third-generation Latinos, fewer than half say they can speak Spanish proficiently (47%) or read a newspaper or book in Spanish (41%). 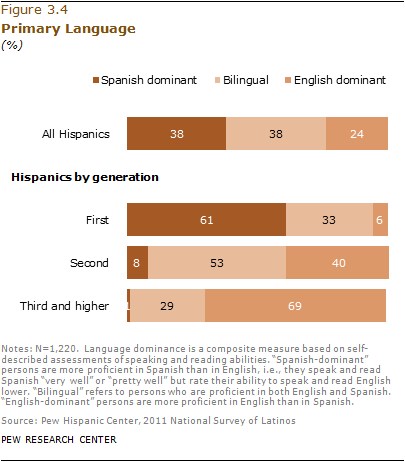 Language Use in Daily Activities 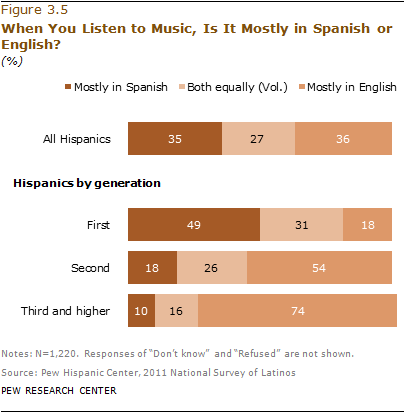 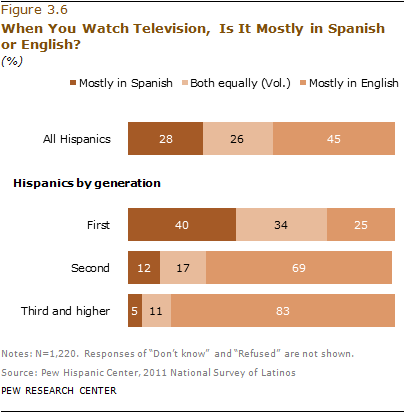 Among all Hispanics, more watch English-language television than Spanish-language programs—45% versus 28%. Meanwhile, 26% say they use both languages equally.

Thinking in English or Spanish 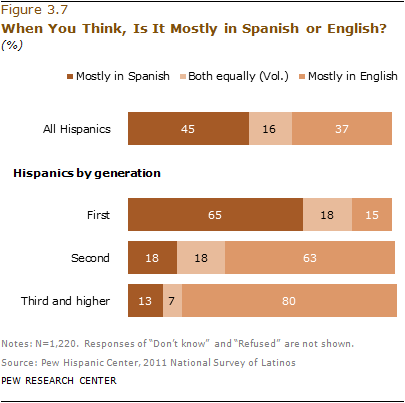 As with other forms of language use, more Latinos say they use Spanish than English when thinking—45% versus 37%. Meanwhile, some 16% say they use both languages when they think.

Hispanic Identity Fades Across Generations as Immigrant Connections Fall Away
Three-Fourths of Hispanics Say Their Community Needs a Leader
Majority of Latinos Say Skin Color Impacts Opportunity in America and Shapes Daily Life
About One-in-Four U.S. Hispanics Have Heard of Latinx, but Just 3% Use It
Hispanics and Their Views of Identity