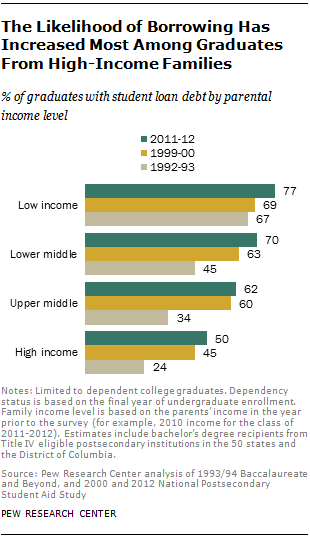 In looking at student debt, two measures of a college graduate’s family affluence are typically considered: family income and parents’ educational attainment (Ellwood and Kane, 2000). The income analysis focuses on college graduates who were dependent on their parents for financial support and looks at the income of a graduate’s parents in the year before graduation.6 Since one year’s income does not necessarily reflect the family’s long-run income prospects, the highest education level of the graduate’s parents also measures socio-economic status. 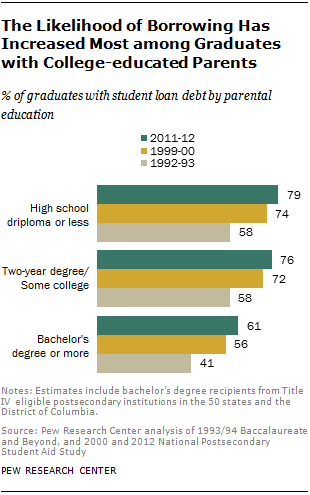 Borrowing rates have not increased as rapidly among graduates from less affluent families. In 1992-93 about two-thirds of graduates (67%) from the lowest income quartile of families graduated with debt. By 2011-12, 77% of similarly situated graduates borrowed.

The tendency to borrow has increased for graduates of all income backgrounds, but particularly for graduates from middle- and high-income families. 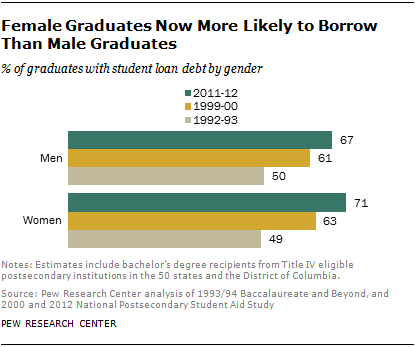 Socioeconomic background considerations suggest that female graduates are more likely than male graduates to borrow and rely on student lending programs. Growing research on the gender gap in college completion shows that female college students and graduates tend to be from more disadvantaged backgrounds than their male counterparts. 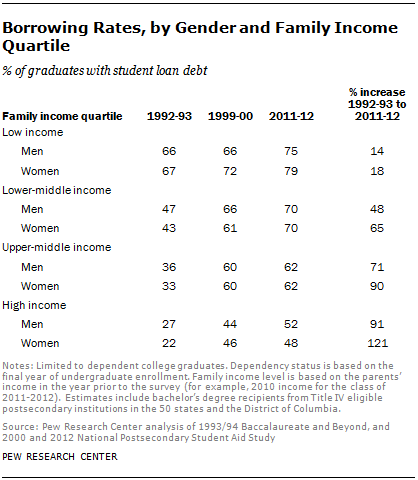 In the class of 2011-12, 27% of dependent female college graduates were from the lowest parental income quartile, compared with 23% of their male peers. This contributes to why females have a higher borrowing rate.

Summary: How Borrowing Patterns Have Changed

Next: Trends in Amounts Borrowed
← Prev Page
Page1Page2Page3You are reading page4Page5Page6Page7Page8Page9Page10Page11
Next Page →