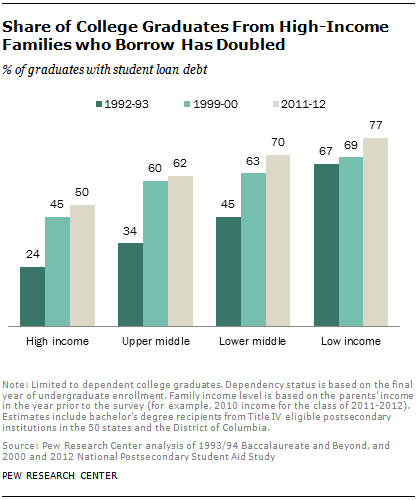 In 2012, a record share of the nation’s new college graduates (69%) had taken out student loans to finance their education , and the typical amount they had borrowed was more than twice that of college graduates 20 years ago. A new Pew Research Center analysis of recently released government data finds that the increase in the rate of borrowing over the past two decades has been much greater among graduates from more affluent families than among those from low-income families. Fully half of the 2012 graduates from high-income families borrowed money for college, double the share that borrowed in 1992-93.1

While graduates from the highest income homes saw a faster rate of increase in borrowing, those from low-income families continue to be more likely to graduate with student loans.

While graduates from the highest income homes saw a faster rate of increase in borrowing, those from low-income families continue to be more likely to graduate with student loans, with 77% graduating with debt in 2012, compared with 50% of their most affluent peers. And the share of low-income graduates who borrow has also increased in recent decades, rising from 67% to 77% over a period of roughly 20 years. But the rate of increase in the likelihood of borrowing has been much more modest among graduates from the lowest income group than it has among middle- and high-income graduates over the past 20 years. 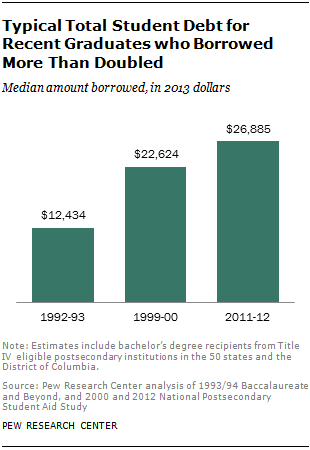 The Pew Research analysis shows, similarly, that there has been a sharper increase in student borrowing among graduates with more highly educated parents. In the class of 2011-2012, some 61% of students whose parents also had graduated from college left school with some student debt. This represented a 50% increase compared with students from similar backgrounds who graduated 20 years earlier. The increase in borrowing among students whose parents have less education was significantly smaller, although those students remain more likely to borrow.

Among recent college graduates who borrowed, the typical amount of cumulative student debt for their undergraduate education increased from $12,434 for the class of 1992-93 to $26,885 for the class of 2011-12 (figures adjusted for inflation). The increase in the median amount of debt by newly minted borrowers between the class of 1992-93 and the 2011-12 varied somewhat by the graduates’ economic circumstances. But regardless of family income, the typical amount owed at graduation increased about twofold over this time period.

The profile of student borrowers has shifted not only along economic lines but also by gender. Female graduates are now somewhat more likely than male graduates to have borrowed money to finance their college education, and women in the class of 2012 owe more of the total student debt than their counterparts in the class of 1993.

In addition, a number of recent proposals to relieve the educational debt burden involve student debt forgiveness to varying degrees (Gale, et. al., 2014). The distributional implications of who stands to gain from such relief are important to the analysis of such proposals.

The remainder of the report provides some background information on the rise in student debt since 1990, as well as trends in the accumulated debt of students finishing bachelor’s degrees. It also includes new findings on student debt outcomes by family background and gender, rates of borrowing, the median amounts borrowed by graduates and an analysis of which groups owe what shares of the total debt. The final two sections of the report present some of the common explanations given for why student borrowing has grown so much over the past two decades.

Findings in this report are based on the National Postsecondary Student Aid Study (NPSAS). Collected by the National Center for Education Statistics, NPSAS is a nationally representative survey of undergraduates designed specifically to measure how undergraduates and their families pay for their education, with a particular focus on federal student aid programs. The most recent administration includes undergraduates enrolled any time between July 1, 2011, and June 30, 2012. The analysis is limited to newly minted bachelor’s degree recipients or undergraduates who obtained their bachelor’s degree in the year the survey was administered. Recent college graduates’ total cumulative borrowing includes both federal and private loans.

Other nationally representative datasets possess information on the outstanding student debt owed by a household or adult (for example, the Federal Reserve’s Survey of Consumer Finances or the New York Federal Reserve Bank’s Consumer Credit Panel). The outstanding student debt may include educational debt incurred many years before the survey. The respondent’s economic profile is largely limited to the current snapshot, and there is no information on the borrower’s upbringing or parental socio-economic situation. The NPSAS reports parental income and education for dependent undergraduates. Parental income is not reported by the student but derived from the student’s financial aid application. Though the available measures NPSAS provides may not be ideally suited to capture the student’s permanent or long-run economic advantages during childhood (Ellwood and Kane, 2000), NPSAS is a preeminent data source for understanding how undergraduates’ financial resources impact their utilization of student grant and lending programs (Baum and Steele, 2010).

Further details are in Appendix B.

This report focuses on the family income background of recent college graduates who took on student debt and how the financial profile of borrowers has changed over the past 20 years. Many recent analyses have examined why undergraduates are borrowing more for their education. This analysis seeks to illuminate which undergraduates are increasingly borrowing to finance their completion of a bachelor’s degree. Understanding the changing income background of student borrowers is useful for illuminating why college graduates may be having greater difficulty in meeting their debt obligations as well as understanding who might benefit from proposals to shift the repayment of loans from the student to the government.

A “college graduate” refers to an undergraduate who received a bachelor’s degree in the year that the data source (National Postsecondary Student Aid Study) was collected.
Student debt refers to the cumulative amount borrowed by graduates during their undergraduate education. It includes federal loans as well as private loans. It excludes loans taken out by parents or guardians (for example, PLUS loans).

Next: The Growth in Student Debt
← Prev Page
You are reading page1Page2Page3Page4Page5Page6Page7Page8Page9Page10
Next Page →

The Changing Profile of Student Borrowers
The Growth in Student Debt Cumulative Student Debt Among Recent College Graduates Who's Borrowing? Trends in Amounts Borrowed Ownership of Debt by New College Graduates Possible Explanations for the Increase in Borrowing by Middle- and High-Income Students Explanations for the General Increase in Borrowing References Appendix A: Additional Figures Appendix B: Details on the Data Source