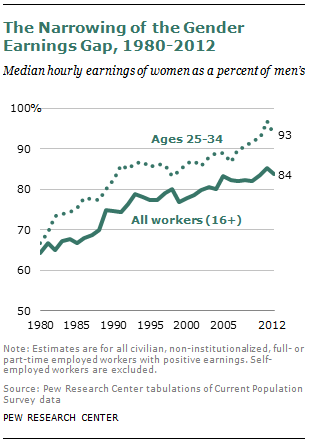 Three decades ago, U.S. women overall made 64% as much as men did in hourly earnings. In 2012, they made 84%—a remarkable narrowing of the gender gap in pay, as well as an illustration of its persistence.

The relative gains are even more striking for American women at the outset of their working lives. Among young adults, ages 25 to 34, women’s hourly earnings were two-thirds (67%) of men’s in 1980 and fully 93% of men’s in 2012. But if past trends are any indication, according to a Pew Research Center analysis of government data, today’s young women may lose some of those gains as they grow older.

Both the long-term reduction of the gender pay gap and its endurance are linked to larger changes in American society. Change came rapidly in the 1980s and has slowed since then.

The gender gap narrowed as women, especially mothers, surged into the labor force beginning in the 1950s, building up experience to compete against men. More recently, younger women have outpaced men in college-going and college graduation, which have opened doors to higher-paying jobs, often in male-dominated fields. In addition, larger forces such as globalization and weakened unions disproportionately have hurt some types of jobs mainly held by men.12

At the same time, women make less than men in part because they still trail men in labor market experience. Women remain twice as likely as men to work part time, and they take time off more often from employment over their working lives—in large part to care for children or other family members. Although women have ¬increased their share of well-paid jobs such as lawyers and managers, research indicates that they remain concentrated in female-dominated lesser-paying occupations and that integration slowed over the past decade.13

In contrast to women, men are more likely to work when they have young children. They work longer hours than women, even in full-time jobs, and some evidence indicates the financial reward for such “overwork” has risen in recent years.14

A notable amount of the gender gap, though, is hard to quantify. How much is due to gender stereotypes that contribute to lower aspirations by women before they even reach the job market? Or is due to weaker professional networks once they look for work? Do women lose out because they do not push as hard as men for raises and promotions? And what is the role of discrimination, which turns up in experiments where people are asked to rate identical resumes from mothers and fathers?15

The amount of the earnings gap that is unexplained by measured factors, such as educational attainment and job type, ranges widely in published research. One recent study, using 2000 data, said that unexplained factors account for just over 20% of the gap, a second, using 2007 data, said 24% to 35% of the gap could not be explained and a third (which looked only at full-time workers in 1998) said 41% could not be accounted for.16

In addition, there is an open question whether the gender pay gap will continue to decrease. That is because change has slowed since the mid-1990s on two key factors: the increase in women’s labor force participation and the narrowing of the gender gap in work experience.17

This chapter explores the demographic, economic and educational explanations behind the trends in the gender gap in pay. The main data sources used here are the Current Population Survey and the American Time Use Survey, both administered by the Census Bureau for the Bureau of Labor Statistics. 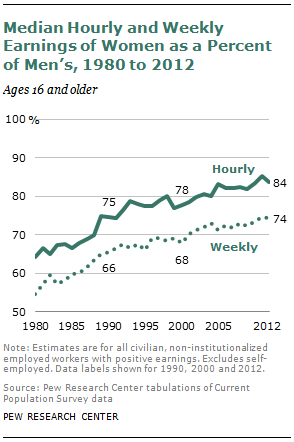 The gender gap in pay varies somewhat based on the metric used to analyze it, but by all measures it has narrowed since 1980, though more slowly in recent years. This report analyzes differences mainly through the lens of median hourly earnings, which is the usual weekly earnings divided by the usual hours worked in a week. This measure accounts for the difference in earnings between women and men that may arise from differences in the number of hours worked.

By age group, the gender gap in earnings is smallest, and has narrowed most sharply, among adult workers at the outset of their working lives, ages 25 to 34. In this age group, women earned 93% as much as men the same age in 2012, compared with 67% in 1980.

Only one group—women ages 65 and older—has experienced a decline in their earnings relative to those of men the same age: Their ratio was 82% in 2012, slightly worse than the 84% in 1980.

Looking at data on successive cohorts of women, they typically begin their working lives at earnings levels closer to men the same age than is true for women overall. However, as the women age, they fail to keep pace with the overall narrowing of the earnings gap. As a result, within 10 to 15 years of entering the labor force, the newer workers slip behind the ratio for women overall, and in many cases lose ground compared with their younger selves. 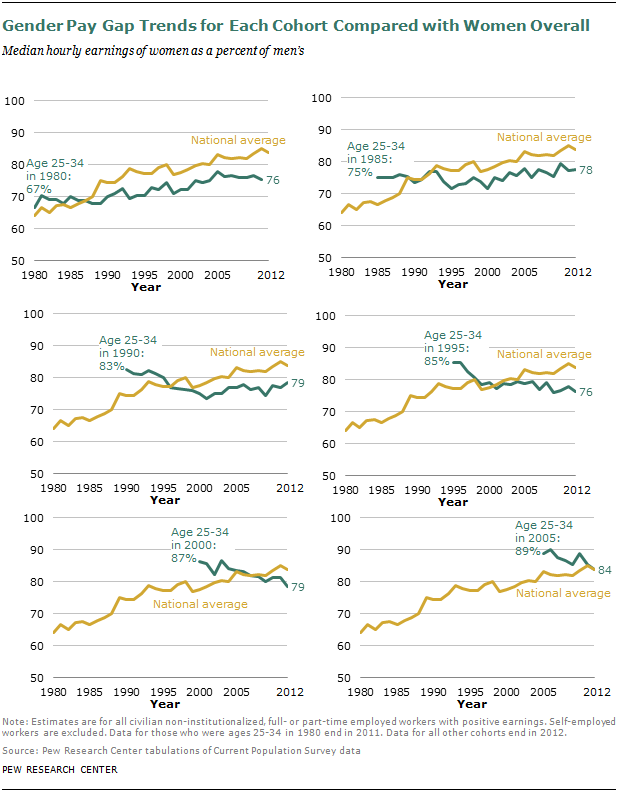 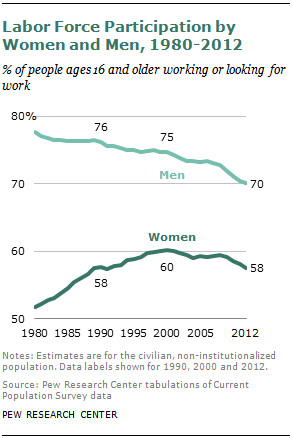 The trends in pay equality have taken place alongside growth in the share of women, especially mothers, who are working or looking for work. However, key differences remain between male and female labor patterns¬ that explain some of the continuing pay gap: Men on average regularly work more hours than women and take less time out of the labor force over their working lives.19

One major gender difference that affects overall earnings is that working women are twice as likely as working men to work part time (less than 35 hours a week), a pattern that has changed little in recent decades. 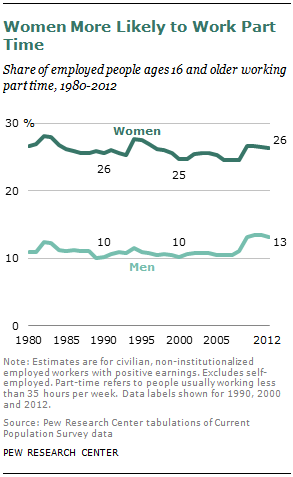 The share of part-timers is highest for the youngest and oldest age groups, but at least one-in-five women works part time in the prime working ages of 25 to 64, compared with one-in-ten men of comparable age.

The use of hourly earnings as a measure of compensation factors in women’s greater likelihood to work part time. Another metric—weekly earnings—produces a somewhat greater gender earnings gap (though a similar time trend) because it does not adjust for part-time work. In 2012, women made 74% of what men made in weekly earnings, compared with 84% when expressed in hourly earnings.

As the Pew Research survey and time use data show, women are more likely than men to take a significant amount of time off to care for children or other family members. 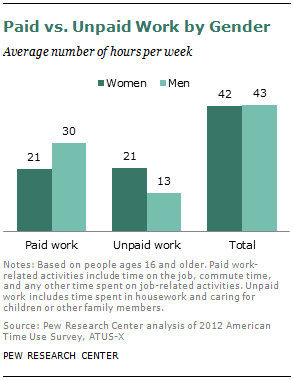 Overall, marriage has a positive link to labor force participation for men, but not a clear link for women. Married men are more likely than unmarried men to be in the workforce. Among women, unmarried women are slightly more likely to be working. 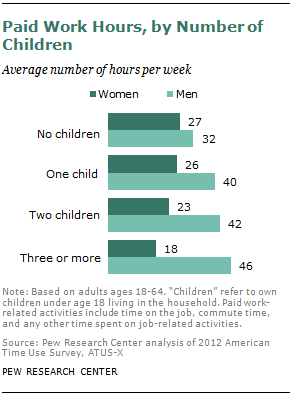 The changed composition of the young female workforce may have played a role in narrowing the overall pay gap because these younger women are less likely than previous cohorts of young women to have family responsibilities. Among women ages 25 to 34, half were married in 2012, compared with 70% of their 1980 counterparts. Nearly half (46%) had no children at home, compared with only a third (31%) in 1980. Those most likely to postpone marriage and childbearing are college graduates; as the next section shows, they make up a growing share of women, especially younger ones. 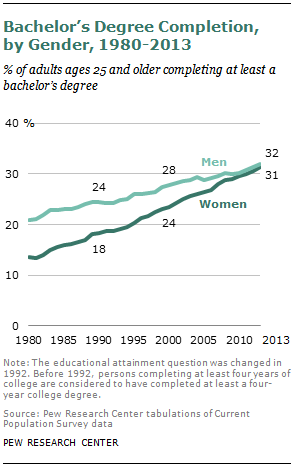 A major factor in reducing the gender gap in earnings is that women have upgraded their educational attainment, and younger women have surpassed men in college graduation rates. Workers with college degrees not only make more money than those with less education, but also are the only educational attainment group to have experienced a meaningful gain in earnings from 1980 to 2012. Among women, hourly earnings for the college-educated have grown 33% since 1980; among men, the gain was 12%. The earnings of workers with less education either were flat, for women, or declining, for men.

As might be expected, women make up a rising share of college-educated workers. In 2012, about half (49%) of employed workers with at least a bachelor’s degree were women, up from 36% in 1980.

As their labor force participation increased, women also widened their representation across the occupational spectrum. Job segregation—that is, concentration of women in lower-paying occupations—has declined, and women have moved into more well-paying occupations that were once dominated by men. This movement has been stronger into professional and managerial jobs than for blue-collar occupations.24

But the trend conceals the fact that key gaps remain within general categories of work, according to a Pew Research Center analysis of Current Population Survey data. For example, a higher share of female workers (13%) than male workers (3%) was employed in health-care occupations in 2012. However, within health-care occupations, median hourly earnings of women were only 75% of what men made in 2012.

In addition, some research finds that occupational integration has slowed. According to one recent study, segregation among full-time, full-year workers did not decline substantially in the 2000s for the first time since the 1960s.26 This affects the gender pay gap because pay levels in female-dominated occupations, on average, are less than those in male-dominated occupations.

Next: Chapter 2: Equal Treatment for Men and Women
← Prev Page
Page1You are reading page2Page3Page4Page5Page6Page7
Next Page →