About one-in-seven adults—14%—who have ever been employed say they have been the victim of gender discrimination on the job at some point in their working lives, the Pew Research survey found.

Women, Baby Boomers and blacks are more likely than men, Millennials and whites or Hispanics to say they have been the victims of job-related gender bias.

For example, fully 18% of women and 10% of men say they have been discriminated against at work because of their gender, a proportion that rises to 23% among Baby Boomer women and 25% among black men.

The new poll also documents the harm that gender discrimination does to a worker’s career. About four-in-ten (43%) who say they have been victims of workplace gender bias report that it has had a negative impact on their career.

When asked to assess the extent of the damage, about three-quarters of those whose careers have been negatively affected by gender bias in the workplace say it has had a big impact, while about one-quarter say it has had a small impact.

The survey finds a correlation between experiences of job-related gender discrimination and attitudes on a range of gender issues. According to the survey, women who report being the victims of workplace gender discrimination are significantly more likely than other women or men to say the country hasn’t made enough changes to address gender bias in the workplace and, more broadly, in society as a whole. For example, about eight-in-ten women (79%) who say they have been the victims of job-related gender bias say it’s easier for men to get top jobs in business or government. In contrast, only about half (49%) of women who have not faced gender discrimination and 38% of men share this view. It is unclear whether experiences of discrimination are influencing attitudes or vice versa.

The wide-ranging survey found that equally large majorities of working men (83%) and women (82%) are satisfied with their jobs. Similar shares of employed men (57%) and women (53%) also agree that they are paid enough for the job they do.

The survey also found that men and women view full- and part-time employment somewhat differently. Among those who work full time, larger shares of women than men say they would prefer a part-time job.

To identify the types of gender bias that workers have experienced in the workplace, the survey asked those who reported being victims of gender discrimination if they have ever been discriminated against because of their sex in three specific areas: pay, promotions and hiring.

Overall, the survey finds that relatively few adults have encountered any of these three types of gender bias tested in the survey. Among those who say they have been discriminated against at work because of their gender, roughly half (52%) say they have had at least one job where they were paid less than someone of the opposite gender doing the same work. This translates into 7% of working adults.34

The survey also found that women are more likely than men to say they have been denied a promotion because of their gender (7% vs. 3%). And women report higher levels of gender bias in hiring (5% for women and 3% for men). 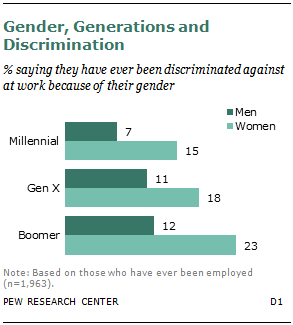 With one notable exception, the proportion of adults who have encountered any type of gender discrimination at work increases with age. While the survey did not specifically ask individuals how many years they worked for pay, this finding likely reflects changing attitudes toward working women and the fact that older workers have spent more time in the workforce, which may have increased their risk of encountering gender discrimination.

Members of the Silent generation are the exception to this pattern of increase. Only 11% of these older adults say they have ever faced gender discrimination in their working lives. That’s identical to the share of Millennials reporting job-related gender bias even though this younger group has spent the least amount of time in the workforce while Silents have presumably worked the longest.
A similar pattern emerges for women when these generational results are broken down by gender. Some 15% of Millennial women say they have experienced gender discrimination at work, a proportion that rises to 23% among Baby Boomer women. Some 15% of Silent generation women and 18% of Gen X women also say they personally have encountered gender bias in their working lives.

Blacks are significantly more likely than whites or Hispanics to report having been the victim of gender discrimination on the job (20% vs. 13% for whites and 12% for Hispanics).

According to the survey, about one-in-five white women (19%) and a similar share of black women (17%) say they have encountered gender discrimination on the job. A quarter of black men (25%) also report being the victim of job-related gender bias.

Taken together, these results suggest that black men are at least as likely as black or white women to say they have been discriminated against at work on the basis of their gender. It might appear that the share of black men having experienced job-related gender discrimination is higher than the proportions of black or white women. But these differences are not statistically significant because the sample size of each group is relatively small.

Among Hispanics, there is virtually no difference in the proportions of men (11%) and women (12%) who report they have been discriminated against at work because of their gender.

By double-digit margins, women who report having experienced gender bias are more likely than women who have not or men to say that employers treat women workers differently than men or that men have an easier time rising to top jobs.

These differences remain about as large on other gender issues, including gender pay equity, the need to make more changes to bring equality of the sexes to the workplace and, more broadly, on how society treats men and women.

Overall, the survey found that about two-thirds (67%) of women who say they have encountered work-related gender bias say that “society favors men over women,” a view shared by about half of women who have not been victims of gender bias (52%) and roughly a third of men with work experience (36%).

These gaps widen when respondents are asked to evaluate a set of reasons that might explain why economic studies, including the Pew Research analysis done for this report, consistently show that women earn significantly less than men.
According to the survey, about eight-in-ten women (78%) who say they have encountered gender bias at work say a “major reason” for the difference in pay is that “employers treat women differently than men.”

Among women who have not experienced gender discrimination, about half (49%) say this is a major reason for the pay difference, a view shared by 38% of men.

An equally large gap emerged when women are asked if it is easier for men than women to get top jobs in business and government. About eight-in-ten (79%) women who report having been the victims of job-related gender bias agree, as do 49% of other women and 38% of men.

Eight-in-ten women who report having been victims (81%) of work-related gender discrimination say women are paid less than men for doing the same work. In contrast, about six-in-ten other women (59%) and half of men (47%) agree.

Similarly, women who have faced gender bias at work are more likely than those who have not to say “the country needs to continue making changes to give men and women equality in the workplace” (88% vs. 69% for other women and 62% for men who have ever worked).

Not only do men and women want the same things in their ideal job—work they enjoy, good benefits, time for family—they also share many of the same attitudes toward the job they currently have.

But the story changes when the lens shifts from gender to race and generations. Blacks (30%) are significantly less likely than whites (56%) or Hispanics (49%) to say they are very satisfied with their jobs.

Millennials—many of whom are just starting their careers—are significantly less likely than older generations to be highly satisfied with their jobs (43% vs. 54% among Gen Xers and 55% among Boomers).

According to the survey, full-time workers are more satisfied with their jobs than those who work part-time (55% vs. 40% say they are “very satisfied”).

Regardless of their work status, men and women express roughly similar levels of job satisfaction, Among full-time workers, 54% of men and 58% of women say they are “very satisfied” with their jobs.

The results are roughly the same for those who work part-time: 35% of men and 43% of women are very satisfied with their jobs, a difference that falls short of being statistically significant. When those who say they are “somewhat satisfied” are analyzed with those who are “extremely satisfied,” even more similar proportions of men (65%) and women (69%) express satisfaction with their part-time jobs.

Another set of questions finds modest differences in how men and women view full- and part-time employment. When full-time workers are asked if they would prefer to work part-time, fully 21% of women but only 13% of men say they would.

The presence of children, including younger children, appears not to be a large factor in determining how working parents view their jobs.

According to the survey, half of employed parents with younger children and 49% of adults who do not have children say they are “very satisfied” with their current jobs. 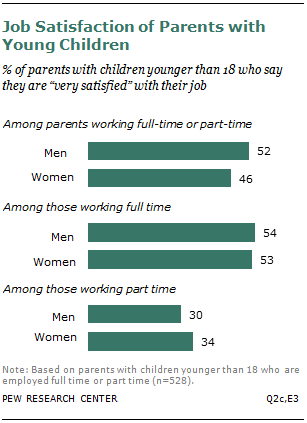 No clear differences emerge when the responses of mothers and fathers are compared. Among those with children younger than 18, roughly similar shares of fathers (52%) and mothers (46%) say they are “very satisfied” with their jobs. Among working adults with no children under the age of 18, about half of men (49%) and 56% of women are very satisfied.

Similarly, about equal shares of mothers (34%) and fathers (30%) who work part time express high levels of satisfaction with their jobs.

Even when the analysis focuses on one particularly time-pressed group—full-time working mothers with children under 18—the result hardly changes: 53% say they are “very satisfied” with their jobs, compared with 54% of full-time working fathers with young children.

Men and women also agree about their pay. About six-in-ten men (57%) and 53% of women say they are adequately paid for the type of work they do and the hours they put in, while the remainder are dissatisfied.

Blacks (40%) are significantly less likely than whites (58%) or Hispanics (56%) to say they are paid appropriately.

While the results on the pay question by race and gender are similar to those for job satisfaction, that pattern is broken when the analysis focuses on the generations.

While Millennials are significantly less likely than other generations to be satisfied with their jobs, roughly equal proportions of Millennials (57%), Gen Xers (58%) and Baby Boomers (50%) say they are paid enough for the kind of work they do and how much they get done at work.