That the least wealthy owe most of the student debt reflects at least two factors: The student debt is largely owed by younger households, and for most households it takes many years to accumulate their nest eggs.

It also reflects the manner in which net worth is measured. Conventionally measured net worth equals the value of the household’s assets minus liabilities. Outstanding student debt is included among the household’s liabilities. But the household assets include only financial assets, properties, equity in businesses and other tangible assets (for example, jewelry and collectibles). Net worth does not include the value of human capital. Conventionally measured net worth is biased to show that student debtors have less wealth because the debt is counted but the corresponding asset (i.e., human capital) is not included as an asset.7

Who Owes the Mounting Student Debt? 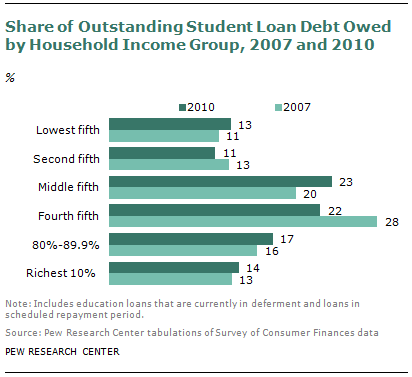 Next: Section 3: Student Debt and the Household Ability to Pay
← Prev Page
Page1Page2You are reading page3Page4Page5Page6Page7Page8
Next Page →