The Survey of Consumer Finances (SCF) is sponsored by the Federal Reserve Board of Governors and the U.S. Department of the Treasury. It is designed to provide detailed information on the finances of U.S. households. Bricker et al. (2012) serves as useful introduction to the specifics of the SCF. 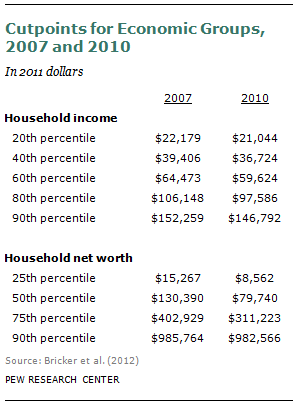 Household income refers to the household’s cash income, before taxes, for the full calendar year preceding the survey. The components of income in the SCF are wages; self-employment and business income; taxable and tax-exempt interest; dividends; realized capital gains; food stamps and other, related support programs provided by government; pensions and
withdrawals from retirement accounts; Social Security; alimony and other support payments;
and miscellaneous sources of income.

Wealth, or net worth, is the difference between the value of assets owned by a household and the value of the liabilities (or debt) held by the household. Assets include items such as the value of an owned home, value of a business, accounts in financial institutions, stocks and bonds, 401(k) and thrift accounts, individual retirement accounts and Keogh accounts, rental properties, motor vehicles and other personal property. Liabilities include home mortgages, credit card debt, student loans, vehicle loans and business debt. The SCF does not account for the discounted values of Social Security benefits or defined benefit pension plans.

The definition of a “household” in the SCF differs from that used in Census Bureau studies. The sampling unit in the SCF is the “primary economic unit” (PEU), not the household. As stated by the Federal Reserve Board, “the PEU consists of an economically dominant single individual or couple (married or living as partners) in a household and all other individuals in the household who are financially interdependent with that individual or couple.” Federal Reserve Board publications refer to the PEU as a “family,” but readers may infer that this necessitates the presence of two related persons, whereas a PEU can consist of a person living alone. In this document, a PEU is referred to as a “household.”

The estimates reported are based on analysis of the public use versions of the 1989 to 2010 SCFs. The 2010 SCF interviewed about 6,500 households, a significantly greater number of interviews than prior years. The unweighted sample sizes in the SCF for various household categories are reported below.

The data on student loan debt, net worth and household income are adjusted for inflation with the Bureau of Labor Statistics’ Consumer Price Index Research Series (CPI-U-RS) as published in DeNavas-Walt, Proctor and Smith (2011). This is the price index series used by the U.S. Census Bureau to deflate the data it publishes on household income. 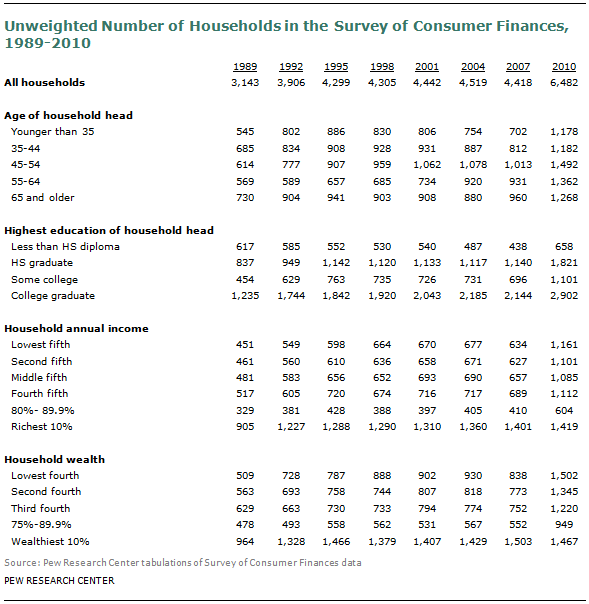 Next: Appendix B: Additional Tables
← Prev Page
Page1Page2Page3Page4Page5Page6You are reading page7Page8
Next Page →