This chapter examines trends in the well-being of lower-, middle- and upper-income groups through the prisms of income and wealth.38 Income is the more widely used measure, but, due to changing economic circumstances, it is subject to sharp, short-term fluctuations. A family that is considered in the middle-income group one year may be in the lower-income group the next, or vice versa.39

Wealth, unlike income, represents a stock of assets, minus outstanding debt, accumulated over time. Among other things, wealth provides retirement income, protection against short-term economic shocks, and security and social status for future generations. There are families, such as seniors who are retired, with low incomes but high levels of wealth, and other families, such as young professionals, with high incomes and low levels of wealth. Thus, the two yardsticks together provide a more complete portrait of the economic status of families.

Trends in income for lower-, middle- and upper-tier households show that in the past four decades the United States has been a society characterized by rising prosperity and rising inequality. Income rose for all three tiers, but it increased the most for the upper-income tier and the least for the lower-income tier. As a result, upper-income households accounted for a larger share of U.S. aggregate household income in 2010 than they did in 1970.40 The increase in their share of aggregate income exceeded the increase in the share of adults that live in upper-income households.

Trends in wealth, data for which are available starting in 1983, tell a slightly different story. From 1983 to 2010, there was a notable increase in wealth only for the upper-income tier. The incomes of middle- and lower-income households may have increased, but their net worth has stagnated and their long-term security may not be as secure as suggested by the trends in income.41 Moreover, the growth in the wealth gap across income tiers easily outdistances the growth in the income gap.

The disparate trends in income and wealth emerged in the Great Recession. The recession caused income to fall by similar percentages in all three income tiers. However, the loss in wealth was much sharper for the lower- and middle-income tiers. Those setbacks were large enough to turn the clock back on the net worth of lower- and middle-income households by about two decades or more.

The steep decline in the net worth of lower- and middle-income households is a consequence of the housing boom and bust that preceded the Great Recession. These households are twice as dependent as upper-income households are on home equity as a source of wealth. Furthermore, in the run-up to the recession, they took on relatively more debt in relation to their assets than did upper-income families. Much of that new debt was secured by their primary residence. Thus, lower- and middle-income families were more vulnerable to the crash in housing values that preceded the recession.42

As in preceding chapters, the estimates of income reported below have been adjusted for household size and scaled to reflect a three-person household. However, wealth data are not adjusted for family size because it is difficult to associate a current family size with a stock of wealth. In part, that is because wealth is accumulated and “consumed” over an extended period of time during which family structure may change significantly. It is also typical for at least part of a family’s wealth to be passed on for the benefit of future generations.

The income analysis spans the 1970-2010 period and is based on the Current Population Survey. Dictated by the availability of data, the wealth trends are measured from 1983 to 2010 using the Survey of Consumer Finances. Because of the way the data are collected and reported, the unit of analysis for income is the household and the unit of analysis for wealth is the family. Families, or households, are divided into three groups based on their income level after the income has been adjusted for differences in family or household size. This process is conducted independently for the two data sources.

Trends in the Income of Lower-, Middle- and Upper-Income Tiers 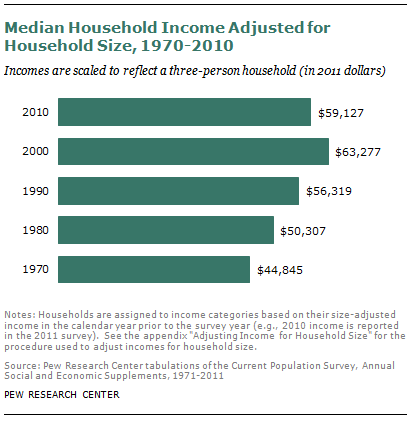 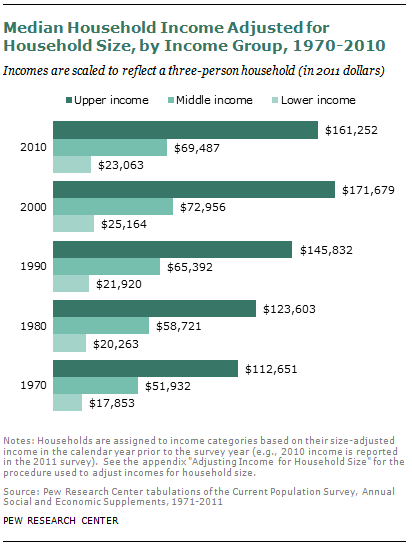 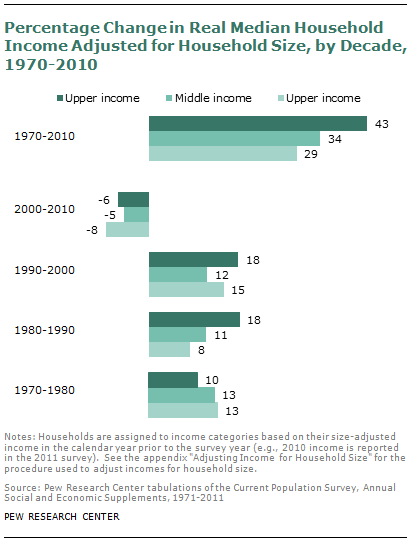 The distribution of U.S. aggregate household income shifted away from the middle and lower tiers to the upper-income tier from 1970 to 2010. This is the consequence of two trends: the higher rate of growth in the incomes of upper-tier households and the decreasing share of adults who live in middle-income households.

households had a 29% share in the adult population but accounted for only 9% of aggregate income.

Trends in the Wealth of Lower-, Middle- and Upper-Income Tiers

Based on wealth, the distances between lower-, middle- and upper-income families are much greater than the differences in income. Moreover, the wealth gap has increased by much more than the income gap in the past three decades. The most striking finding is that only upper-income families have experienced notable gains in wealth from 1983 to 2010; the net worth of lower- and middle-income families is virtually unchanged. This is a consequence of the housing market crash in 2006 and the Great Recession, which have seemingly erased nearly all of the wealth gains experienced by lower- and middle-income families in the two decades prior to the start of the Great Recession.

Because the Survey of Consumer Finances, the source for wealth data, is conducted triennially, estimates presented in this section cover nine-year intervals starting with 1983.45 The years 1983, 1992, 2001 and 2010 follow immediately on the heels of or represent the tail ends of recessions. Data are also presented for 2007, a business cycle peak, to highlight the impact of the Great Recession on the wealth of U.S. households. 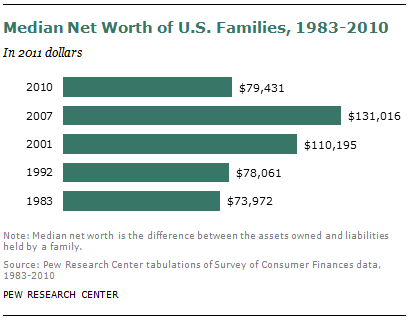 The Great Recession delivered a crushing blow to household wealth. In the space of three years, median wealth fell by 39%, to $79,431 in 2010. Thus, at the end of the last decade, the median net worth of American families was only 7% higher than what it was in 1983. 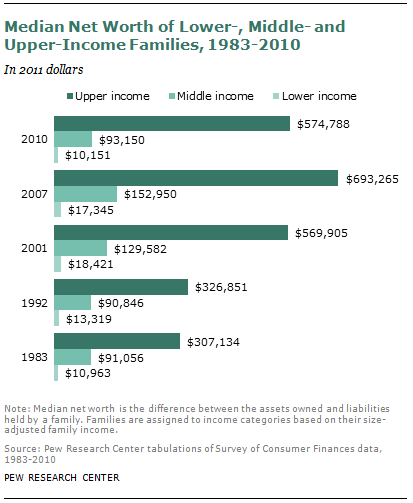 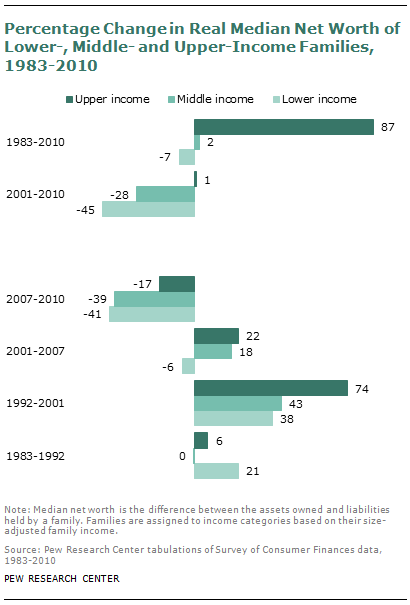 The Composition of Assets 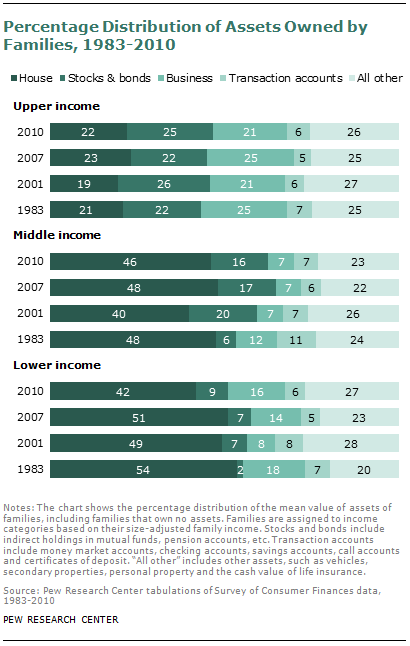 The portfolios of upper-income families are more balanced. Houses, stocks and bonds, and business assets each account for 20% to 25% of total assets. Thus, their wealth is less dependent on home equity, the main source of wealth declines since 2006.

Overall, the asset distributions of families did not change much from 1983 to 2010. The most notable change is the growing role of stocks and bonds in middle- and lower-income family portfolios. This change occurred primarily from 1983 to 2001 with the rise of defined contribution pension plans such as 401(k) plans.

Net Worth, Assets and Liabilities

A family’s net worth is the difference between the value of its assets and the value of its liabilities. Net worth will increase as long as the value of a family’s assets, in absolute amount, increases by more than its liabilities. Thus, a family can take on more debt but still increase its net worth as long as its assets holdings increase by a sufficient amount. This section presents trends in the mean net worth, assets and liabilities of lower-, middle- and upper-income families.47 There are notable differences across income groups in this regard, especially with respect to changes in the level of debt.

From 1983 to 2001, the value of the assets owned by families in all three income tiers increased by more than the level of debt. Middle-income families, for example, experienced a gain of $149,035 in the mean value of their assets. In the same period, the value of their debt increased by $30,142. The net gain, or the increase in their mean wealth, was $118,894. The pattern of asset values increasing more than debt values repeated from 2001 to 2007. 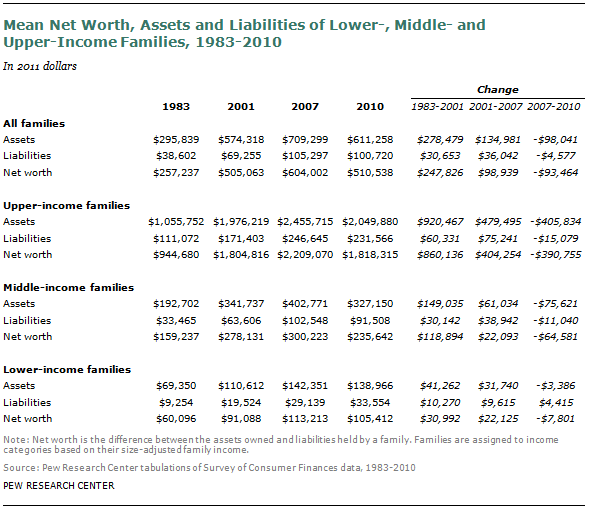 From 2001 to 2007, the pattern of debt rising at a faster pace than asset values became entrenched among upper-income families as well. A principal cause of this was the boom in housing values, which encouraged families to raise the level of debt secured by their primary residences.48 This trend left families in a more vulnerable position prior to the Great Recession than they might have been if the growth in debt and assets had been more balanced. 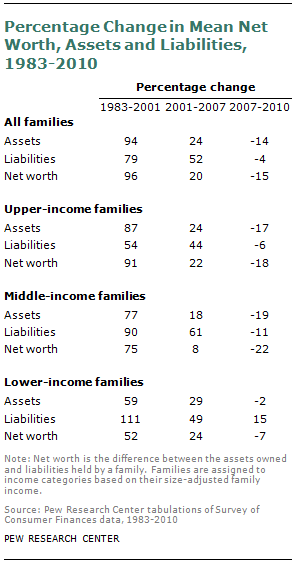 The story from 2007 to 2010 is mostly one of declining asset values and declining debt levels. The mean debt level for middle-income families fell by $11,040, a cut of 11%. The value of their assets fell even more, by $75,621 (19%). Thus, their mean net worth dropped by $64,581 with the Great Recession. Upper-income families had a similar experience from 2007 to 2010, with their asset values decreasing at a faster rate than their debt levels. Their mean net worth decreased by $390,755 in this period.

References for Chapters 6 and 7

Congressional Budget Office. 2011. “Trends in the Distribution of Household Income Between 1979 and 2007.” Washington,

Debels, Annelies, and Leen Vandecasteele. 2008. “The Time Lag in Annual Household-Based Income Measures: Assessing and Correcting the Bias.” Review of Income and Wealth 54(1): 71-88.

Garner, Thesia, Javier Ruiz-Castillo, and Mercedes Sastre. 2003. “The Influence of Demographics and Household-Specific Price Indices on Consumption-Based Inequality and Welfare: A Comparison of Spain and the United States.” Southern Economic Journal 70(1): 22-48.

Kennickell, Arthur B., and Janice Shack-Marquez. 1992. “Changes in Family Finances from 1983 to 1989: Evidence from the Survey of Consumer Finances.” Bulletin 78. Washington, DC: Federal Reserve, January.

Krueger, Alan B. 2012. “The Rise and Consequences of Inequality in the United States.” Council of Economic Advisers, Speeches and Testimony. Speech given to Center for American Progress, Washington, DC, January 12.

The Lost Decade of the Middle Class Chapter 2: Middle-Class Demographics Chapter 3: Middle-class Economics Chapter 4: Middle-Class Mobility Chapter 5: Middle-class Politics Chapter 6: Census Trends for Income and Demography
Chapter 7: Income and Wealth, by Income Tier
OverviewIncomeWealthTrends in the Income of Lower-, Middle- and Upper-Income TiersDistribution of U.S. Aggregate Household IncomeTrends in the Wealth of Lower-, Middle- and Upper-Income TiersThe Composition of AssetsNet Worth, Assets and LiabilitiesReferences for Chapters 6 and 7