A somewhat larger share of middle-class adults believe that the policies of President Obama will help the middle class than say the same about the policies of Republican hopeful Mitt Romney, according to the Pew Research survey. 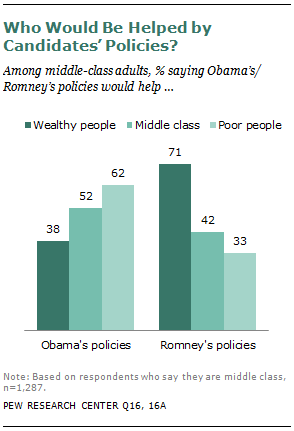 The survey also finds a much wider gap in perceptions about which party favors the rich—62% of middle-class adults say Republicans do, while just 16% say Democrats do. But neither party is seen as being the champion of the middle class. Slightly more than one-third of middle-class adults (37%) believe Democrats primarily favor their interests, while a smaller share (26%) says the same about the GOP.

The survey of 2,508 adults, including 1,287 who described themselves as members of the middle class, was conducted in late July. Interviewing for the survey ended nearly three weeks before Romney selected Rep. Paul Ryan of Wisconsin to be his running mate and a month before the GOP convention was to convene in Tampa.

Attitudes on the two presidential contenders diverge when the middle class is asked to evaluate whether Obama and Romney’s programs would help the wealthy or the poor. Fully 71% of the middle class say Romney’s policies would benefit the rich, while 38% offered the same view of Obama’s programs. At the same time, six-in-ten middle-class adults (62%) say the president’s policies would help the poor, while only a third (33%) say the same about Romney’s policies.

Perceptions of the Parties

Judgments about Romney and Obama mirror the views of middle-class Americans toward the Republican and Democratic parties. 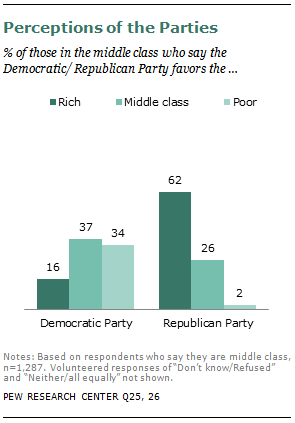 According to the survey, only about a quarter to a third of the middle class says that the Republicans (26%) or Democrats (37%) primarily favor middle-class interests over those of the rich or poor. Republicans are perceived as the party of the rich, while the middle class is divided over whether the Democratic Party is more concerned about their needs or those of the poor.

To examine the intersection of social class and politics, the Pew Research survey asked respondents if each of the two major political parties “favors the rich, favors the middle class or favors the poor.”

Overall, the middle class was somewhat more likely to say that the Democratic Party rather than the GOP favored its interests (37% vs. 26%). 13 But about as many say the Democrats favor the poor (34%), and 16% believe the party favors the rich. 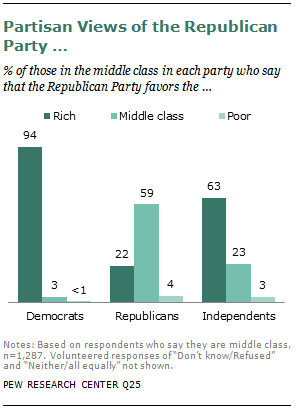 The survey also found that the middle class is politically diverse: Roughly equal shares of middle-class adults identify with the Democratic Party (34%) or say they are independents (35%), while somewhat fewer align with the Republican Party (25%). As a group, middle-class adults are more likely to identify themselves as political conservatives (39%) than liberals (22%). About a third (35%) say they are moderates. 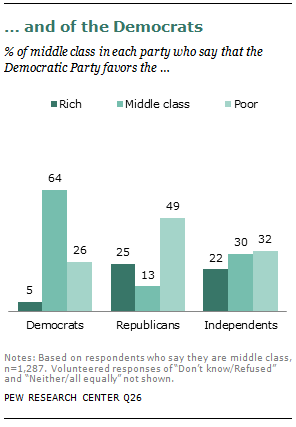 On other political issues, the survey found that a majority of middle-class adults (55%) have no opinion when asked if they disagree or agree with the Tea Party movement. Only 15% agree with its objectives, while nearly twice as many disagree (27%).

The remainder of this chapter examines these findings in more detail. The first section examines which political party is seen by core demographic groups in the middle class as favoring the rich, the poor and the middle class. The second section analyzes middle-class perceptions of the Tea Party movement. The final section examines the demographic characteristics of middle-class adults who identify with the Republican and Democratic parties.

Viewing the Parties through a Partisan Lens

In contrast, Democrats are much more likely to see their party representing the interests of the middle class and the GOP as the party of the rich.

For example, more than nine-in-ten Democrats (94%) see the GOP as the party of the rich—roughly four times the proportion of Republicans who express that view (22%). In contrast, a plurality of all Republicans (49%) say that the Democratic Party favors the poor, a view shared by 26% of Democrats.

The Partisan Fight for the Middle Class 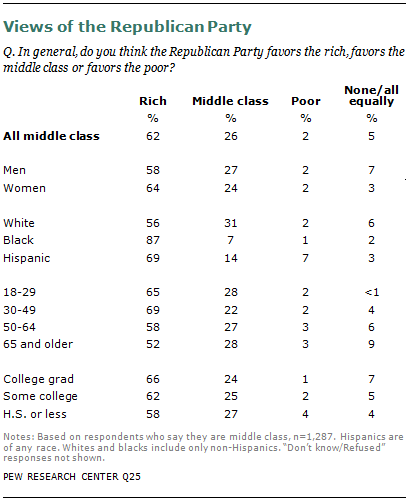 Political ideology also is strongly correlated with views of the two parties. Middle-class conservatives divide equally: 42% say the GOP favors the rich, while an identical proportion say the party favors the middle class.

In contrast, about eight-in-ten liberals (82%) say Republicans are the party of the wealthy, but only 8% say the GOP champions the middle class. Views of moderates fall between those of conservatives and liberals: fully 72% say the GOP represents the interests of the rich, while 20% say its primary focus is the middle class. 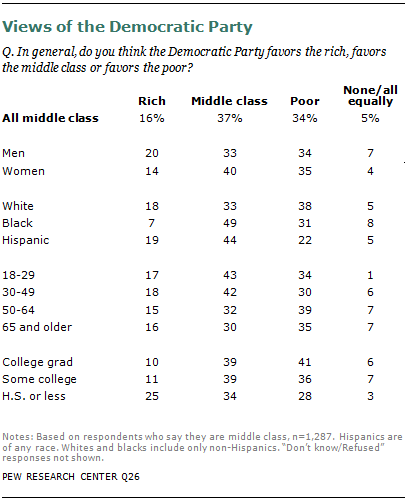 Other demographic groups differ in their perceptions of the two parties, though in most instances these differences reflect the different partisan makeup of the groups. 14 Among the more significant differences:

Race: Middle-class whites are significantly less likely than minorities to see the Republican Party as favoring the wealthy. Roughly nine-in-ten blacks (87%) and 69% of Hispanics say the GOP generally supports the rich, a view shared by 56% of all whites. When the focus shifts to the Democratic Party, middle-class whites and Hispanics also are more likely than blacks to say the Democrats favors the wealthy (18% and 19%, respectively, vs. 7%).

Middle-class Hispanics are significantly less likely than whites to say the Democrats represent the interests of the poor (22% vs. 38% for whites and 31% for blacks). The Republican Party is viewed as favoring the poor by a slightly larger share of Hispanics (7%) than whites (2%) or blacks (1%).

Age: About two-thirds (68%) of middle-class adults younger than 50 years old believe the Republicans are the party of the rich, a view shared by 55% of those 50 and older. Younger adults also are more likely than those 50 and older to say that the Democratic Party favors the middle class (42% vs. 32%).

Gender: Roughly equal proportions of men (58%) and women (64%) say the Republican Party favors the rich. The Democratic Party is more likely to be seen as the party of the rich by men (20%) than by women (14%). There are no statistically significant differences in the views of men and women on their views of which party favors the middle class. 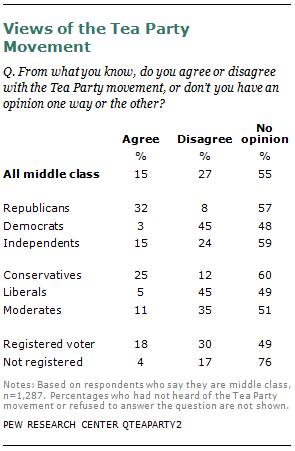 Most middle-class Americans have no fixed view of the Tea Party, the anti-tax, anti-government grassroots political movement that rose to prominence after the 2008 elections. When asked in the survey whether they agreed, disagreed or had no opinion of the Tea Party, a majority (55%) expresses no firm view.

Even though the Tea Party has played a crucial role in the Republican presidential primaries and other high-profile contests in recent years, about six-in-ten Republicans (57%) say they have no opinion, as do 48% of Democrats.

It’s not that Americans are unaware of the Tea Party movement. Only 2% of those surveyed say they have not heard about the Tea Party.

Among the 42% of the middle class who offer a judgment of the Tea Party movement, attitudes tilt negative. About a quarter (27%) say they disagree with the Tea Party, while 15% agree with it.

Only about a third of all middle-class adults identify with the Democratic Party (34%), while a smaller share are Republicans (25%). About a third (35%) say they are independents. These breakdowns are virtually identical to the partisan divisions among all adults.

Among the middle class, whites are more likely than minorities to identify with the Republican Party. A third of whites (33%) but only 9% of Hispanics and 1% of blacks say they are Republicans.

Minorities and particularly blacks remain among the Democratic Party’s most loyal constituencies. Fully two-thirds of all blacks (66%) and 41% of Hispanics identify themselves as Democrats, compared with 27% of whites.

Men in the middle class are more likely than women to identify themselves as political independents (41% vs. 29%). At the same time, women are more likely to be Democrats (40% vs. 28%). About a quarter of men and women say they are Republicans.

About four-in-ten Hispanics and adults younger than 30 (42% for both) say they are political independents, compared with 28% of blacks and 26% of those ages 65 and older.

Next: Chapter 6: Census Trends for Income and Demography
← Prev Page
Page1Page2Page3Page4You are reading page5Page6Page7
Next Page →