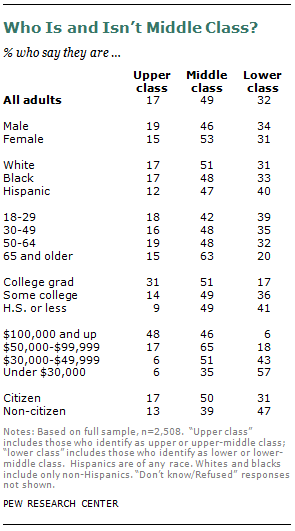 Asked to place themselves on a five-step socioeconomic ladder, about half of Americans (49%) say they are in the middle, according to the Pew Research survey. In a similar survey taken in 2008, 53% of adults placed themselves in the middle class.

An additional 17% of the public places itself in the upper or upper middle class, and nearly a third —32%—in the lower or lower middle class.7 Both proportions have changed since a Pew Research Center survey conducted in early 2008, after the Great Recession began in December 2007 but before its impact was widely felt. The share of the public placing itself in the upper class has declined from 21% since 2008, while the lower-class share rose from 25%.

The share of adults who identify themselves as middle class varies by age but shows little difference by race or Hispanic origin. Analyzed by other characteristics, responses do not vary by educational attainment, but they do vary by gender, marital status and citizenship. 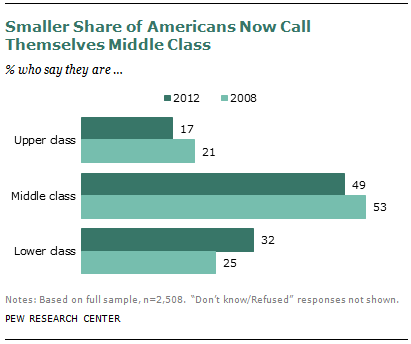 Married adults (55%) are more likely to identify themselves as middle class than are unmarried adults (44%). This is true for each subgroup of unmarried adults—those who are living with a partner (40%); separated, divorced or widowed (46%) or never married (43%).

There are few differences by educational attainment when it comes to Americans’ self-description as middle class. However, 31% of college-educated Americans call themselves upper class, compared with less than 11% among those who did not attend or complete college. At the other end of the scale, 39% of those who did not attend or graduate from college describe themselves as lower class, compared with 17% of college graduates.

Looked at by immigrant generation, there is not a statistically significant difference in the share of adults identifying as lower, middle or upper class among those born in the U.S. compared with those born abroad. However, citizenship is a dividing line: Half of citizens say they are middle class, compared with only 39% of non-citizens.

How do these survey results square with Census Bureau data analyzed elsewhere in this report? The share of adults who self-identify as middle class in the survey is about equal to the share of adults living in households defined as middle income using census data (with a size-adjusted household income that is two-thirds to double the overall median size-adjusted household income). Based on Census Bureau data, the share of all households that are middle income declined in the decade from 2001 (54%) to 2011 (51%).8 Based on data from the Pew Research surveys, there was a decline of four percentage points between 2008 and 2012 in the share of adults who define themselves as middle class.