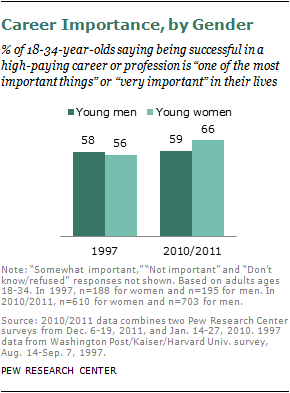 In a reversal of traditional gender roles, young women now surpass young men in the importance they place on having a high-paying career or profession, according to survey findings from the Pew Research Center. Two-thirds (66%) of young women ages 18 to 34 rate career high on their list of life priorities, compared with 59% of young men.1 In 1997, 56% of young women and 58% of young men felt the same way. 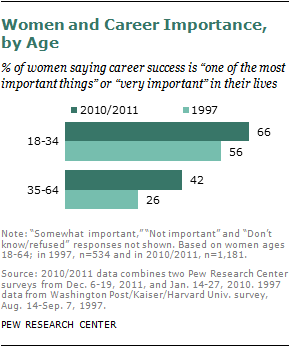 The past 15 years have also seen an increase in the share of middle-aged and older women who say being successful in a high-paying career or profession is “one of the most important things” or “very important” in their lives. Today about the same share of women (42%) and men (43%) ages 35 to 64 say this. In 1997, more middle-aged and older men than women felt this way (41% vs. 26%). 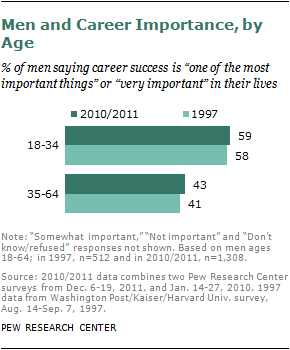 The survey question about career success is part of a battery that asks respondents to weigh the importance of key aspects of life. For men and women of all ages, being a good parent and having a successful marriage continue to rank significantly higher on their list of priorities than being successful in a high-paying job or career. Thus, the increased importance women are now placing on their careers has not come at the expense of the importance they place on marriage and family. 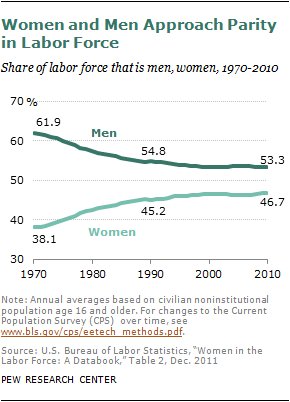 Over the course of the past four decades, women have been making significant gains in their labor force participation and educational attainment.

There was some speculation that women’s share of employment could surpass men’s during the 2007-2009 Great Recession—often referred to as the “Mancession” because of disproportionate job losses in male-dominated fields such as construction and manufacturing. However, women have fared worse than men in the recovery that began in mid-2009.3

On the education front, women have made substantial strides in recent decades and now surpass men in both college enrollment and completion. Some 44% of women ages 18 to 24 were enrolled in college or graduate programs as of October 2010, compared with just 38% of men in the same age group.4 In addition, 36% of women ages 25 to 29 had a bachelor’s degree, compared with only 28% of men in the same age group—a record-high divergence. Women first surpassed men in these realms in the early 1990s, and the gap has been growing wider ever since.5 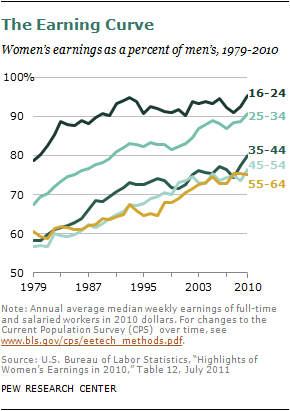 In spite of their educational advantage and increased presence in the workplace, women continue to lag behind men in terms of earning power. In 2010, women who were full-time or salaried workers had median weekly earnings of $669, compared with $824 for their male counterparts. Still, women have made big strides in attaining equal pay. In 1979, when data of this sort began being collected, women earned on average 62% of what men earned. After steadily rising for the past two and a half decades, the growth in the women’s-to-men’s earnings ratio settled around 2004 and has remained in the 80-81% range since then.6

Today’s wage gap is smaller among young workers than among their older counterparts. Among all workers ages 16 to 34, women’s earnings are more than 90% of men’s; this ratio drops for women ages 35 to 64, who earn 80% or less of what men earn across the board. While this could signal a changing workplace, women have tended to fall behind men as their careers progress, so it remains to be seen whether this is an age or generational phenomenon.7

As all of these long-term trend lines attest, there have been significant changes over the decades in the experiences of women and men in the labor force. Attitudes have changed as well. A 1978 Gallup survey asked respondents to rate how much they agree with the following statement: “Commitment to a meaningful career is very important to me.” Back then, 67% of young men ages 18 to 34 agreed strongly, while only 53% of young women said the same.8 The latest Pew Research survey question, while worded somewhat differently, shows young women valuing career success more than young men. 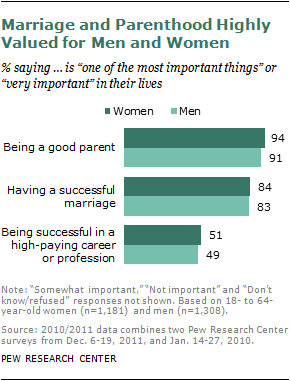 Though women are increasingly focused on college and career, the share who place marriage and parenthood high on the list of priorities is undiminished. For both men and women, being a good parent and having a successful marriage remain much more important than career success.

The shares of working-age women and men who say having a successful marriage is “one of the most important things” or a “very important” thing in their lives exceed 80% now, just as they did in 1997. And the shares who place a high priority on being a good parent exceed 90% in both years. In comparison, only about half of women or men place the same level of importance on professional success.

The share of women ages 18 to 34 who say that having a successful marriage is one of the most important things in their lives has risen nine percentage points since 1997, from 28% to 37%. 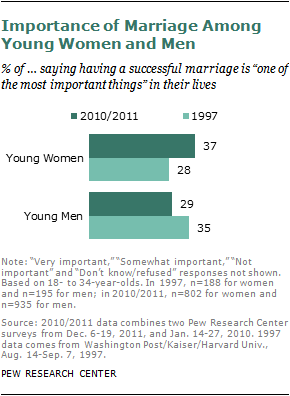 On the other hand, the share of young men ages 18 to 34 who say that having a successful marriage is one of the most important things has dropped from 35% in 1997 to 29% now. Today a significantly smaller share of young men (29%) than young women (37%) list marriage as one of their highest priorities; this represents a change from 1997, when men and women were statistically equal on this measure. 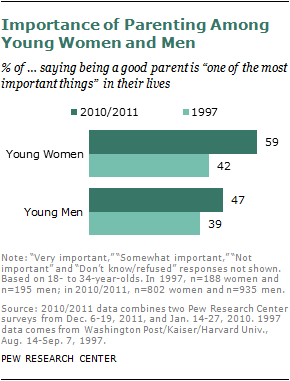 Parenting ranks even higher on the list of priorities for both women and men. The share of young women who rate parenting as a top priority has increased dramatically in recent years: up 17 percentage points. Today, nearly six-in-ten (59%) women ages 18 to 34 say being a good parent is one of the most important things in their life. The share of young men who feel this way is 47% now, up from 39% in 1997.

Both middle-aged and older women and men are significantly more likely to place parenting at the top of their priorities today than in 1997. More than half (56%) of women and nearly half (49%) of men ages 35 to 64 say being a good parent is one of the most important things, with increases of 13 and 11 percentage points, respectively. 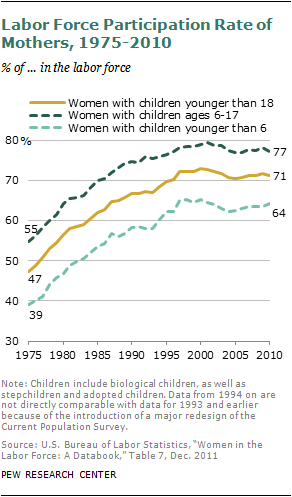 The increased value placed on marriage and family does not necessarily reflect the broader societal trends in these areas. Young adults today are marrying at lower rates and later ages than ever before—only a third (33%) of 18- to 34-year-old women are now married, compared with nearly three quarters (73%) of women this age in 1960.9 The median age for first marriage is now 27 for women, up from 20 in 1960.10 And the median age for first-time mothers is now 24, up from 22 in 1960. So while marriage and family still remain among women’s top priorities, many are delaying these milestones when compared with earlier generations.

But women in today’s workforce who do marry and have children are not necessarily leaving their careers to do so. Today’s woman often balances her career with her husband and children. Fully 48% of married couples in 2010 consisted of two breadwinners.11 The share of dual-employed couples was slightly higher in 1997 (53%).12 Back in 1975, however, the share of families with both a husband and wife in the labor force was only 34%.13

Generally, the public is supportive of more active roles for women in the workplace. A September 2011 Pew Research poll found that 73% of Americans feel that the trend toward more women in the workforce has been a change for the better in our society.15 Furthermore, an October 2010 Pew Research poll found that a majority (62%) of the general public feels that a marriage where the husband and wife share the responsibilities of work and children is more satisfying than a more traditional marriage with a male breadwinner. However, the public remains conflicted about the impact these changes have had on young children. When asked whether the trend toward more mothers of young children working outside the home is a good thing or a bad thing for society, only 21% of Americans said it is a good thing. Some 37% said this is a bad thing for society, and roughly the same share (38%) said it hasn’t made a difference.16