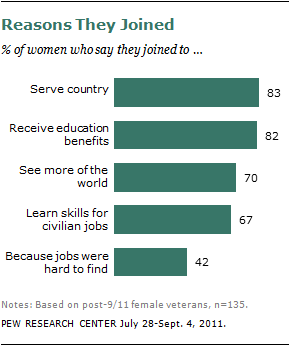 The following attitudinal analyses come from a nationally-representative Pew Research survey of 1,853 military veterans, including 712 veterans who served in the period after Sept. 11, 2001. The survey was conducted from mid- to late-summer 2011. Among this sample of veterans, 135 female post-9/11 veterans were surveyed. Though caution should be taken in analyzing such a small sample, all differences reported are statistically significant. 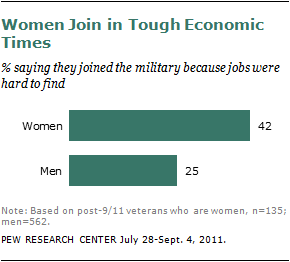 Returning from the Wars 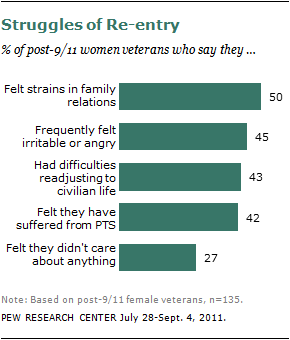 At the same time, however, they are equally likely to have had emotionally traumatic or distressing experiences while serving (47% vs. 42% of men), and their transition back into civilian life has been equally tough. More than four-in-ten female post-9/11 veterans (43%) say their readjustment to civilian life after their military service was very or somewhat difficult (along with 45% of men).

Female veterans are also just as likely as their male counterparts to say they have experienced the positive benefits of military service. Fully 80% of women say they have appreciated life more since they were discharged from the service (83% of men say this). In addition, 97% say they feel proud of their service and 91% have had someone thank them for their military service (compared with 96% and 92% of men, respectively). 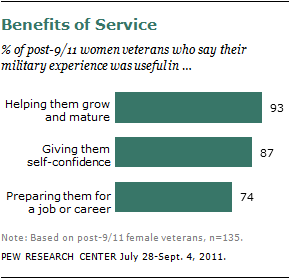 More than three-quarters (78%) of women veterans say they would advise a young person close to them to join the military. This is similar to the share of men who would advise this (82%).

Views on the Wars

This gender gap is not as apparent among the general public. In a Pew Research survey conducted Sept. 1-15, 2011, men and women as a whole expressed similar views about the wars in Iraq and Afghanistan, with narrow majorities of both saying the wars were not worth fighting.

Women in the U.S. Military: Growing Share, Distinctive Profile A Snapshot of Active Duty Women
Post-9/11 Female Veterans and Their Experiences
Why They JoinedViews on the Wars