Have the employment trends for men and women in the Great Recession and the subsequent recovery been different from those in past episodes? The answer is, during the recession, no, but during the recovery, yes.

In all recessions since 1969, including the Great Recession, employment outcomes for men were worse than for women. However, the recovery from the Great Recession is the first since 1970 in which, two years after the recession ended, women have lost jobs while men have gained jobs. It is also the first recovery in which the unemployment rate for men has fallen even as the unemployment rate for women has risen.

Men have experienced job losses in all recessions since 1969. The most severe job losses for men occurred during the recessions from January 1980 to November 1982, when their employment fell 5.9%, and during the Great Recession, which caused a 7.6% decline in men’s employment. 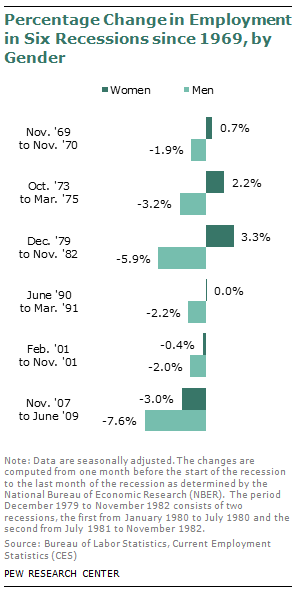 Women did not always lose jobs in recessions—their employment increased during the 1969-70, 1973-75 and 1980-82 recessions. That is a consequence of the rapid movement of women from the home to the office in those decades. The labor force participation rate for women increased from 43.3% in 1970 to 51.5% percent in 1980, and then again to 57.5% by 1990. The rise in the number of women in the labor force was sufficient to mask the effects of the recessions on their employment level. As the labor force participation rate stabilized for women in the 1990s, they, too, experienced drops in employment during recessions. 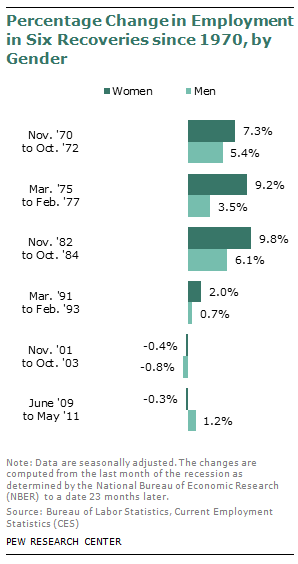 Employment trends during the first two years of economic recoveries reveal rapid gains in jobs for both genders during the 1970s and the 1980s. In part, that is because many jobs lost in those recessions were a consequence of temporary layoffs, restored quickly as the economic climate improved. In more recent recessions, especially in the Great Recession, the role of temporary layoffs diminished and permanent reductions in workforces were the more significant force behind rising unemployment. Thus, recoveries from the 1991 recession and the recessions in this decade are associated with sluggish gains in employment. 10

Regardless of the rates at which jobs returned after recessions, job growth for women outpaced job growth for men in the recoveries in 1970-72, 1975-77, 1982-84 and 1991-93. Both men and women continued to lose jobs in the two years following the 2001 recession, but women lost them at a slower rate. It is only in the recovery from the Great Recession that women have lost jobs while men have gained them.