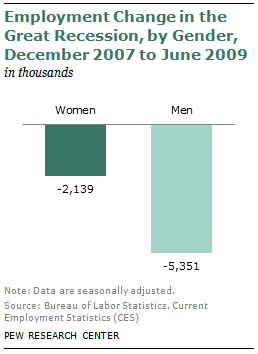 The Great Recession had a severe impact on the employment of both women and men. Women lost 2.1 million jobs in the recession, their employment level dropping from 67.3 million in December 2007 to 65.1 million in June 2009. Job losses for men were even greater. Their employment fell from 70.7 million to 65.4 million, a loss of 5.4 million jobs. 6 Because men lost so many more jobs during the recession, employment levels for men and women had reached near equality by June 2009. That was an unprecedented development, but it was short-lived—the employment gap has widened again in favor of men during the recovery.

Employment Trends in the Recession by Industry

Job losses were widespread, with the construction and manufacturing sectors shedding them at the greatest rate. Men lost a total of 2.8 million jobs in these two sectors alone, and women lost 737,000 jobs. Other sectors with large reductions in employment were retail trade and professional and business services. Collectively, these two sectors let go 1.1 million women and 1.6 million men. The finance industry, a sector at the heart of the economic crisis, shed 284,000 jobs held by women and 189,000 jobs held by men.

Education and health services created 619,000 jobs during the recession, of which 491,000 were filled by women and 128,000 by men. That is not an unusual development for this sector—its employment has grown at a faster pace than any other sector since 1970, and it has added jobs through previous recessions as well. Another source of job creation in the recession was the federal government, adding 57,000 jobs, of which 34,000 went to women and 23,000 to men. Women also benefited from the addition of 141,000 jobs in local governments during the recession. 7 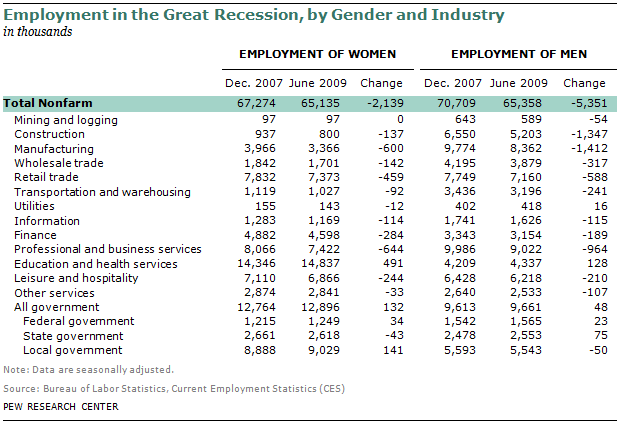 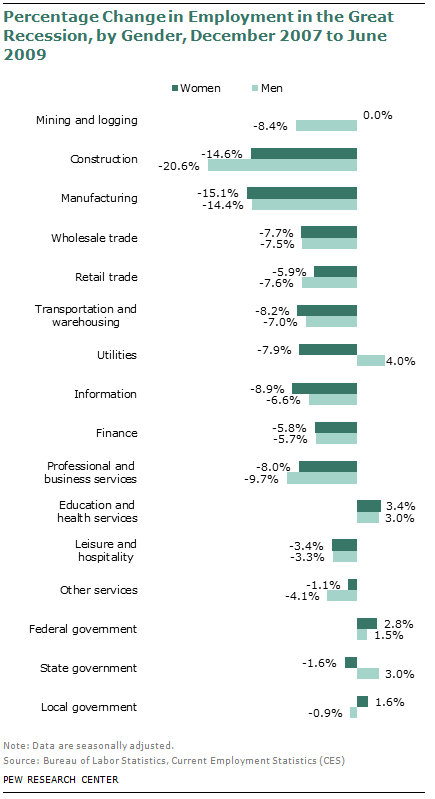 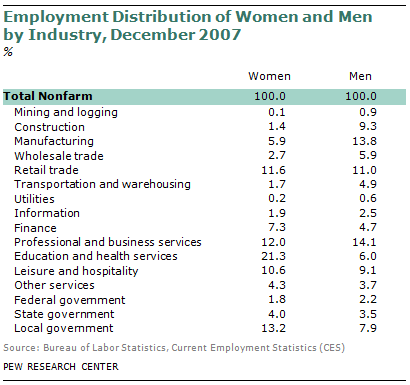 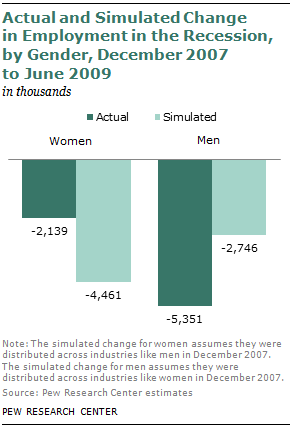 The number of jobs saved by women during the recession may be ascertained by estimating the number of jobs they would have lost if they had been distributed across industries like men in December 2007. This means assuming that at the start of the recession, only 6.0% of women, not 21.3%, were employed in education and health services and that 23.1% of women, not 7.3%, were in construction and manufacturing, and so on for other sectors. Under this hypothetical distribution, and given the actual job loss rate for women in each industry, it is estimated women would have lost 4.5 million jobs in the recession, not the 2.1 million they actually lost.

The implication is that the industries in which women are concentrated provided substantial shelter during the recession, cutting the potential job loss for women by more than half. If this exercise is repeated for men, that is, if they are assumed to be distributed across industries like women are in December 2007, it is estimated they might have lost 2.7 million jobs in the recession, rather than 5.4 million. These estimates show that virtually the entire gender gap in jobs lost in the recession is due to the concentration of women and men in different sectors of the economy.

Next: IV. Unemployment in the Recession and Recovery
← Prev Page
Page1Page2You are reading page3Page4Page5Page6
Next Page →