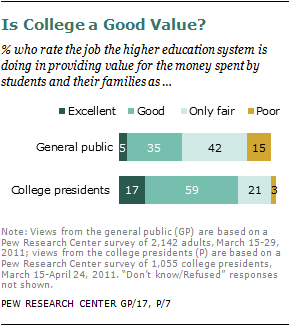 A majority of Americans (57%) say the higher education system in the United States fails to provide good value for the money students and their families spend, and about four-in-ten college presidents say the system is headed in the wrong direction, according to a pair of new nationwide surveys—one of the general public; the other of college presidents—conducted by the Pew Research Center.

At a time when sharply rising student debt burdens have touched off a national debate about the cost and value of a college education, the public survey shows that fewer than one-in-four Americans (22%) believe that most people today can afford to pay for a college education, down from 39% who felt this way a quarter of a century ago. 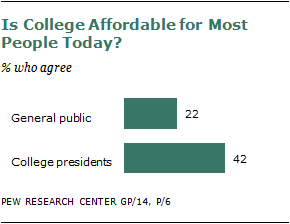 College presidents are not as concerned as the public about affordability, but their survey responses reveal broad misgivings about quality and standards—both of the institutions themselves and of the students attending them. 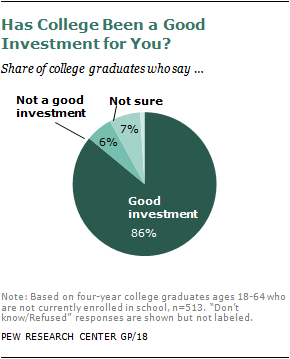 Not all findings from the two surveys are downbeat. While a minority of the public says students get excellent (5%) or good (35%) value for the money they and their families spend on college, an overwhelming majority of the college graduates surveyed—86%—say that college has been a good investment for them personally. 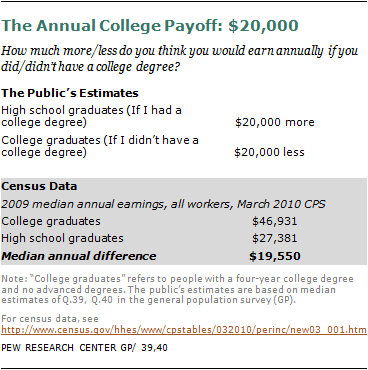 Moreover, the survey shows that the public has a keen awareness of the substantial earnings dividend that college graduates enjoy in their working lives.

These mirror-image estimates are not only in sync with each other, they’re spot on with the relevant government data. According to 2010 Census Bureau data, the gap in median annual earnings between a worker with a high school diploma and one with a college degree is $19,550. According to a Pew Research analysis of census data, over the course of a forty-year working life, the typical college graduate earns an estimated $550,000 more than the typical high school graduate, even after factoring in the costs and foregone earnings associated with going to college. 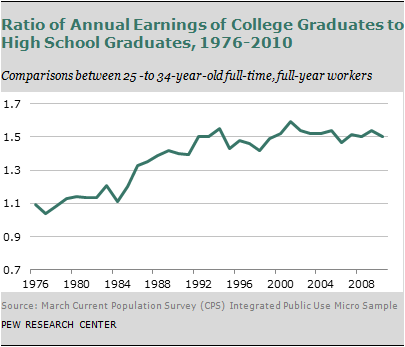 The education-based earnings gap among workers grew steadily from the mid-1970s through the mid-1990s and has been relatively stable since then (see chart to the right), according to a Pew Research analysis of census data. However, because college graduates are more likely than high school graduates to be employed, the earnings gap somewhat understates the full marketplace premium that accrues to those with a college degree. (See Chapter 5 for a detailed analysis of the differences in work life earnings by different levels of education and different fields of study.)

Beyond these dollars-and-cents evaluations, the Pew Research survey finds that college graduates, on average, are happier and more satisfied with their jobs, their financial situation and their education than are those who did not attend college. It also finds that most graduates say that their college education was very useful in helping them grow intellectually (74%), mature as a person (69%) and prepare for a job or career (55%).

College remains a near universal aspiration in this country, even in the face of steeply rising costs. Among parents of a child ages 17 or younger, fully 94% say they expect their child (or children) to attend college.

But the survey also finds that while Americans place considerable stock in the value of college, they see character traits, not education, as the most important determinants of success in life. When asked what it takes for a young person to succeed in the world, more people point to traits such as a good work ethic (61% say this is extremely important) and knowing how to get along with people (57%) than say the same about a college education (42%). 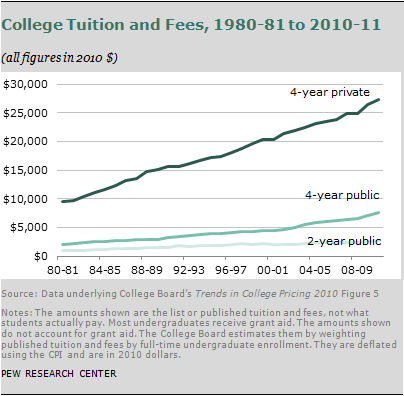 The pair of Pew Research surveys were conducted at a time when the cost of a college education—at both public and private institutions—has roughly tripled since 1980 in inflation-adjusted dollars; when more students than ever are borrowing to finance their educations; and when the typical student who graduates from a four-year college with an outstanding loan starts out with a record balance of $23,000.

The survey of the general public was conducted by landline and cellular telephone from March 15 to 29, 2011, among a nationally representative sample of 2,142 adults living in the continental United States. A separate online survey of college presidents, by the Pew Research Center in association with the Chronicle of Higher Education, was conducted from March 15 through April 24, 2011, among the leaders of 1,055 two-year and four-year private, public, and for-profit colleges and universities with 500 or more students enrolled.

Here are key findings from the two surveys:

The remainder of this report is organized as follows: Chapter 2 provides a look at long-term trends on college enrollment, cost and student debt, based on data from the U.S. Census Bureau, the U.S. Department of Education and other official sources. Chapter 3 provides a detailed look at the findings of the Pew Research survey of the general public. Chapter 4 provides a detailed look at findings from the Pew Research/Chronicle of Higher Education survey of college presidents. Chapter 5 provides a Pew Research estimate of the lifetime “payoff” of a college education that weighs the cost and foregone earnings a student incurs while in college against the added earning power that comes with a college degree.

Is College Worth It?
Chapter 1: Overview
The Big PayoffCost and ValueQuality and DirectionMission and RoleAbout the Report
Chapter 2: Trends in College Enrollment, Completion, Cost and Debt Chapter 3: Public Views and Experiences Chapter 4: Views of College Presidents Chapter 5: The Monetary Value of a College Education Appendix 1: Survey Methodology