As a nation, the United States is often portrayed as restless and rootless. Census data, though, indicate that Americans are settling down. Only 11.9% of Americans changed residences between 2007 and 2008, the smallest share since the government began tracking this trend in the late 1940s.

A new Pew Social & Demographic Trends survey finds that most Americans have moved to a new community at least once in their lives, although a notable number — nearly four-in-ten — have never left the place in which they were born1. Asked why they live where they do, movers most often cite the pull of economic opportunity. Stayers most often cite the tug of family and connections. 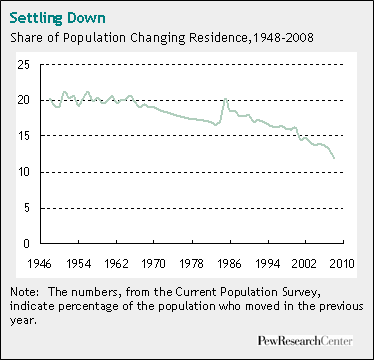 Both the survey and Census data indicate that the biggest differences in the characteristics of movers and stayers revolve around geography and education. In the Midwest, nearly half of adult residents say they have spent their entire lives in their hometown. That compares with fewer than a third of those who live in Western states. Cities, suburbs and small towns have more movers than stayers, while rural areas are more evenly split. Three-quarters of college graduates have moved at least once, compared with just over half of Americans with no more than a high school diploma. College graduates also move longer distances — and move more often — than Americans with a high school diploma or less, and employment plays a greater role in their decisions about where to live. By income group, the most affluent Americans are the most likely to have moved.

The Census Bureau’s Current Population Survey indicates that the number of people who moved between 2007 and 2008, 34 million, was the lowest since 1959-60, when the population of the U.S. was 41% smaller than it is now. The annual migration rate, which held at about 20% through the mid-1960s, has drifted downward since then to its current low of 11.9%.

Analysts say the long-term decline in migration has occurred because the U.S. population is getting older and most moves are made when people are young. Another brake on moving is the rise of two-career couples, because it is more difficult to coordinate a relocation when two jobs are involved. On top of these long term trends, the current economic downturn has led to a further decline in migration, because jobs are typically one of the key magnets that induce people to move.

The Pew Social & Demographic Trends survey of 2,260 adults, which was conducted Oct. 3-19, 2008, asked respondents why they have stayed in their hometowns or have moved to their current community. This report combines the survey findings with Census Bureau data on migration patterns between states and regions.

As for foreign-born adults, a majority say that the U.S. is home, while nearly four-in-ten reserve that designation for their country of birth. Not surprisingly, the longer an immigrant lives in this country, the more likely the U.S. is considered “home.”

The Pew survey finds that stayers overwhelmingly say they remain because of family ties and because their hometowns are good places to raise children. Their life circumstances match those explanations. Most stayers say at least half a dozen members of their extended families live within an hour’s drive; for 40%, more than 10 relatives live nearby. A majority of stayers also cite a feeling of belonging as a major reason for staying put.

Movers are far less likely to cite those kinds of ties. Fewer than four-in-ten say a major reason they moved to their current community has to do with family or child-rearing. Most movers have five or fewer extended-family members living within an hour’s drive of them, and 26% have none. The most popular reason that movers choose a new community, selected by a 44% plurality, is job or business opportunities, according to the Pew survey. About the same share of stayers (40%) cite job or business opportunities as a major reason for staying, but far more stayers choose reasons related to family and friends.

Movers are more likely than stayers to say that it is likely they will move in the next five years. But despite those and other differences, equal shares of movers and stayers — about six-in-ten — rate their communities overall as good to excellent.