While many Americans say they are concerned about the environment, a much smaller share — roughly two-in-ten — sees themselves as making an effort to live out that concern all the time. People focused on everyday environmentalism in this way also tend to be concerned about the issues of climate change but their beliefs about the causes of climate change closely match those of the public as a whole. And, perhaps contrary to conventional assumptions, they are not dominated by the liberal left but made up of the same mix of Republicans and Democrats as the population as a whole.

How different are the behaviors of these everyday environmentalists? Those who describe themselves as always trying to protect the environment are a bit more likely do things such as bring their own shopping bags, but most do so only sometimes, at best. And they are a bit more likely to have participated in a cleanup day at park or other neighborhood venue. But, they are no more likely than other Americans to reduce and reuse at home by composting, having a rain barrel, or growing their own vegetables. Environmentally conscious Americans are just as likely as other people to have spent hobby and leisure time hiking, camping, hunting or fishing in the past year; they are also about equally likely to have spent time caring for plantings in public parks or other public spaces.

People focused on living out their concern for the environment are more likely to have friends that share their environmentally conscious view, but they are also more bothered when other people fall short. For example, most in this group are bothered a lot by other people leaving lights and electronic devices on or throwing away things that could be recycled. 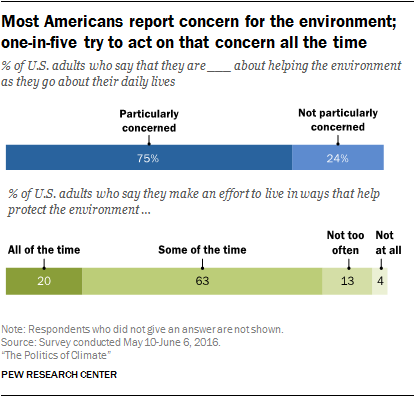 But just one-in-five Americans say they try to live in ways that help the environment “all the time.” 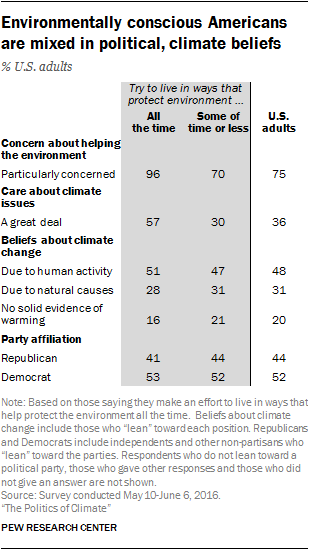 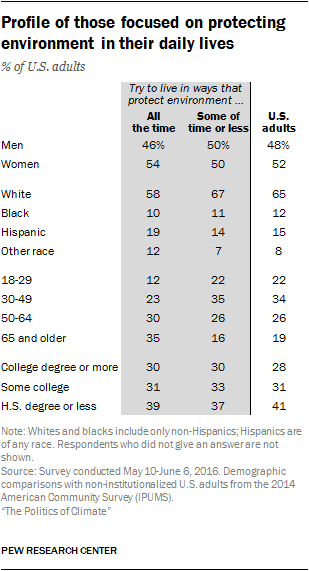 Further, environmentally conscious Americans come from a wide mix of demographic, income and educational backgrounds. This group skews older rather than younger; in fact, they are less likely to be in the younger generations than the population as a whole.9 They are about equally likely to live in urban, suburban and rural areas as is the population as a whole; there is no relationship between region and an effort to live in ways that protect the environment. 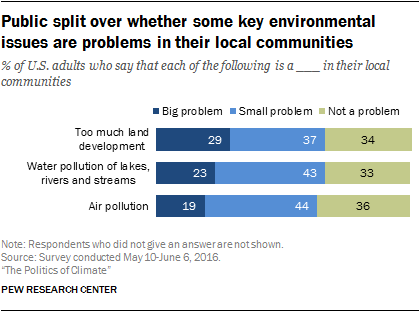 The Pew Research Center survey included questions about a handful of ways people could “act on” their concern for the environment in daily life. Two examples: the practice of shoppers bringing their own bags for purchases in order to reduce waste and choosing cleaning products based on whether the ingredients would help or hurt the environment.10

Few Americans say they do either of these things all the time: 15% always bring their own shopping bags and 12% always select cleaning products based on this goal. And some 29% of Americans say they never bring their own shopping bags in order to help the environment; 18% say they never making cleaning product purchases with this aim in mind. 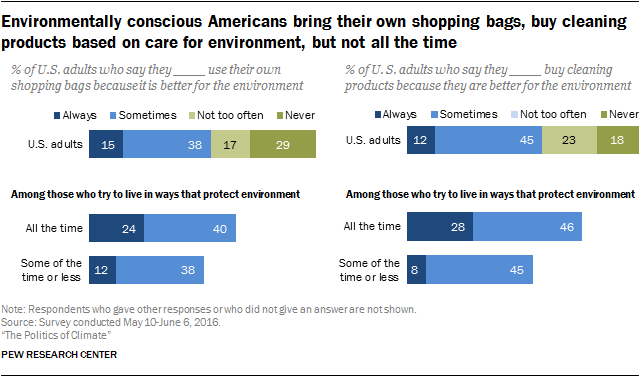 There is a modest tendency for people who express more environmental concern to take both of these actions more regularly. For example, among people who identify themselves as conscious about how to help the environment all the time, 65% say they at least sometimes bring their own shopping bags in order to reduce waste, compared with 53% of other adults.

Similarly, 74% of those who always to try help the environment say they purchase cleaning products with this in mind at least sometimes. This compares with 57% among other adults. 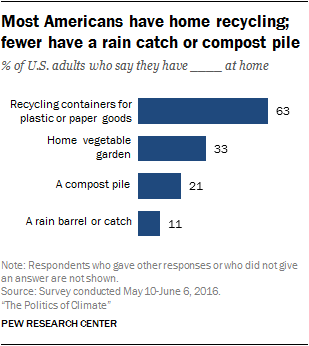 While most Americans have recycling bins at home, only a minority do things at home to reduce waste and reuse natural resources such as maintaining a compost pile (21%) or using a rain barrel or other catch for water (11%). About a third of Americans (33%) say they grow vegetables at home.

Homeowners are more likely to have each of these things at home. Some 67% have recycling bins, 43% have a vegetable garden, 28% compost, and 14% have a rain catch.

But there are no differences, or only modest differences, among adults who are more and less environmentally conscious when it comes to composting, having a rain barrel or growing their own vegetables at home. 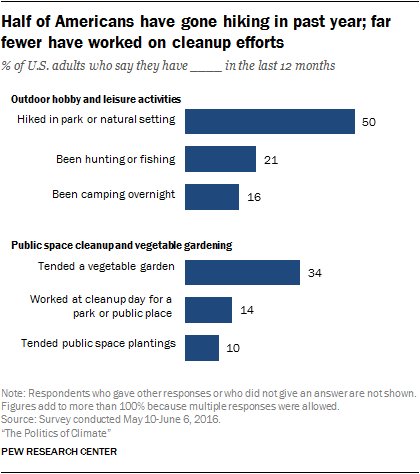 Americans’ enjoyment of the outdoors is shared among both those who aim for everyday environmentalism and those less concerned with living in ways that protect the environment.

Overall, some 58% of Americans say they have participated in at least one outdoor activity (whether hiking, camping, or hunting or fishing). Outdoor enthusiasts come from all demographic, educational and political groups. Those who have spent hobby and leisure time outdoors in the past year are just as likely to be people focused on protecting the environment in their daily lives as those less focused on this.

Half of the public (50%) says they have taken a hike in a park or natural setting outdoors over the past year. That figure is a bit higher (59%) among adults ages 18 to 49; four-in-ten people age 50 and older have been hiking. Hiking is a bit more common among those who express a great deal of concern about climate change (56% of this group has been hiking in the past year compared with 47% of those with no or not too much personal concern about the issue of climate change.) But those who are focused on living in ways to protect the environment are equally likely as other Americans to have gone on a hike in a park or other natural setting in the past year.

One-in-six Americans (16%) have been camping overnight in the past year. (The share doing at least one of these three outdoor activities is 58% because some people have done more than one.)

Some 14% of adults say they have spent time outdoors in order to clean up a park or other public space, and one-in-ten (10%) have worked to tend to public plantings in the past year. Some 23% of environmentally conscious Americans have participated in a cleanup day but tending to public plantings is equally common among those who are more and less environmentally conscious in their daily lives.

About a third of Americans (34%) have worked in a vegetable garden for their family’s use. Four-in-ten (40%) homeowners have done so, including roughly equal shares of homeowners in urban, suburban and rural areas.

Birds of an environmentally conscious feather? 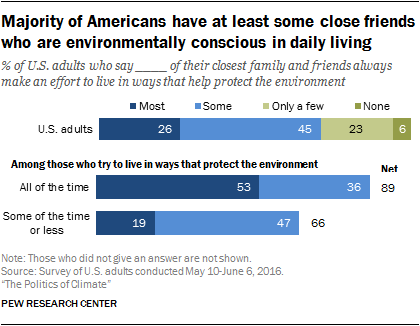 Social networks are often made up of those who share similar views. For example, a Pew Research Center study on politics finds that in the 2016 election, few Clinton supporters say they have close friends who are Trump supporters, and vice versa. The same pattern holds when it comes to concern about the environment.

But 53% of environmentally conscious Americans say most of their friends always try to live in ways that protect the environment.

Americans bothered when others waste electricity and don’t recycle 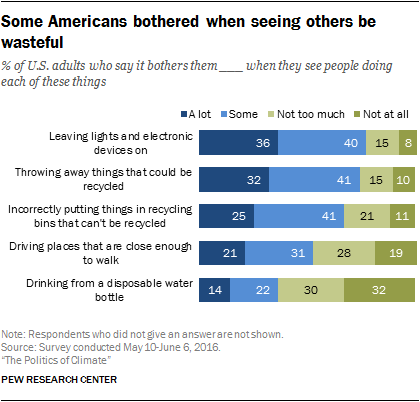 Everyday efforts to protect the environment often hinge on behaviors from many, if not all, individuals in society to work. The Pew Research Center survey included a set of six questions to explore people’s reactions to their fellow citizens who waste natural resources or do not try to minimize waste in some way.

Similar shares say they are bothered a lot by people throwing away things that could be recycled (32%) or incorrectly putting things in recycling bins that can’t be recycled (25%). Smaller shares say people driving places that are close enough to walk and drinking from disposable water bottles bothers them a lot (21% and 14%, respectively). 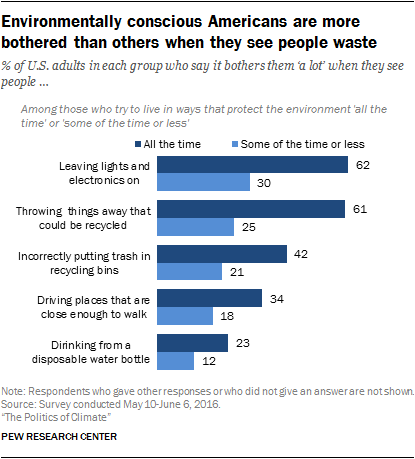 Environmentally conscious Americans are bothered more by the failings of others around them to reduce waste than are people with less focus on environmental protection. Specifically, majorities of those who always try to live in ways that protect the environment say it bothers them “a lot” when others leave lights and electronic devices on (62%) or throw away things that could be recycled (61%); this compares with 30% and 25%, respectively, among those who are less focused on environmental protection in their daily lives. And, some 42% of this environmentally conscious group is bothered a lot when other people incorrectly put trash in recycling bins; while 34% are bothered a lot by people driving places that are close enough to walk.

Next: 4. Public knowledge about science has a limited tie to people’s beliefs about climate change and climate scientists
← Prev Page
Page1Page2Page3You are reading page4Page5Page6Page7Page8Page9
Next Page →