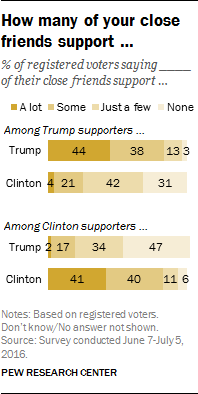 Nearly half of Clinton supporters (47%), and 31% of Trump supporters, say they have no close friends who support the opposing candidate.

The survey conducted June 7-July 5 among 4,602 adults, including 3,834 registered voters, on Pew Research Center’s nationally representative American Trends Panel finds that large majorities of both Trump and Clinton supporters have friends who back their preferred candidates.

Clinton and Trump backers also are far more likely to talk about the election with those who favor “their” candidate than with those who back the opponent. In the survey, conducted before the party conventions, most voters (67%) say the election comes up in conversation at least somewhat often, but only 23% say it comes up very often. 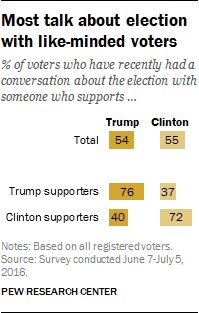 Among other findings from the new survey:

Few voters ‘hide’ their election preferences. Just 7% of registered voters say they would “rather other people not know” who they are supporting for president. Most (58%) say they do not mind if people know who they support, but “don’t go out of their way to say it.” A third say they are “pretty outspoken with others” about their voting preferences. There are only slight differences between Clinton and Trump supporters in these views.

Some have had political arguments, but few ‘major’ ones. Nearly four-in-ten voters (37%) – including nearly identical shares of Clinton and Trump supporters – say they have had an argument about the election. But just 8% have had a “major” argument, while 30% have had a “minor” argument.

Election discussions focus more on personalities than issues. About six-in-ten voters (59%) say the discussions about the election have mostly been about the candidates’ personalities and comments; fewer (32%) say they have focused on specific issues and policy positions. In this regard, voters are having conversations about the election that reflect what they say they are seeing from the campaign and news coverage of the election. In June, 65% of voters said the presidential campaign “is not focused on important policy debates,” and in a separate survey, 55% of adults said there was too little news coverage of the candidates’ stances on issues. 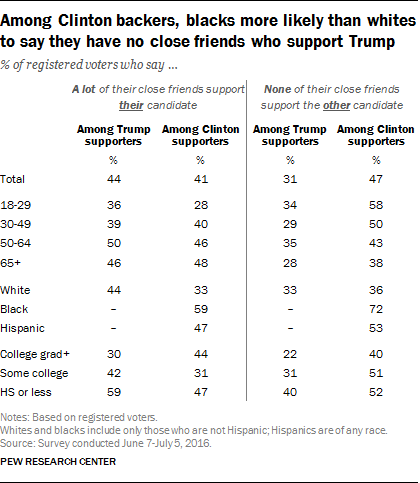 More black than white Clinton supporters also say they have “a lot” of close friends who support their own candidate (59% vs. 33%).

Among supporters of both Clinton and Trump, less educated voters are more likely than those with more education to say they have no friends who back the opposing candidate.

How open are voters with their candidate preferences? 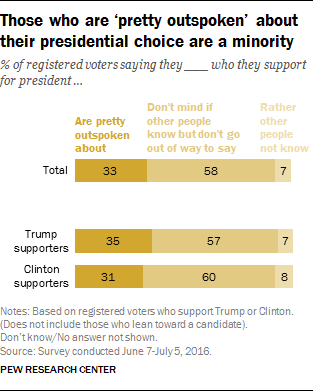 A majority of voters (58%) who currently plan to support either Trump or Clinton say they don’t mind if people know who they support but that they don’t go out of their way to say it. A third say that they are “pretty outspoken” with others about their support, while far fewer (7%) say that they would rather other people not know that they support one of these candidates.

There are no significant differences between Clinton and Trump voters on their willingness to share who they support. Majorities of both groups (60% of Clinton supporters and 57% of Trump supporters) don’t mind if others know but don’t go out of their way to say so.

Older voters who back each of the candidates are more likely to be outspoken than younger voters. About four-in-ten (39%) of voters over 50 are outspoken about their preferences for the election compared with just 20% of those under 30. 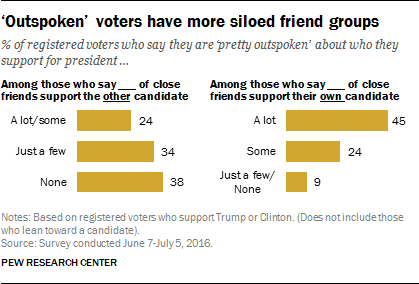 In addition, slightly more than four-in-ten (42%) of voters with no college experience say they are outspoken, compared with just 26% of those who have completed college.
Among Clinton and Trump supporters, only about a quarter (24%) who have at least some friends who back the other candidate are “pretty outspoken” about their voting preferences. That compares with 38% who say they have no close friends who support the other candidate. 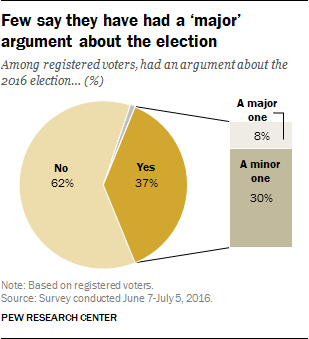 Similar shares of Trump supporters (37%) and Clinton supporters (38%) say they’ve argued about the contest. Younger voters are the most likely to say they’ve had an election-related argument: 54% of those under 30 have. By comparison, just 30% of voters over 65 have quarreled over the election. 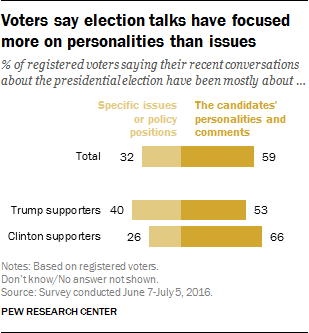 By about two-to-one, voters say that their recent conversations about the election have been more about the candidates’ personalities and comments (59%) than about specific issues or policy positions (32%).

Few Clinton or Trump Supporters Have Close Friends in the Other Camp
Survey reportCandidate support and personal friendshipsHow open are voters with their candidate preferences?Views of election conversations
Methodology