Roughly seven-in-ten Black Christians say that opposing sexism is essential to their faith, as do a similar share of those who belong to other religions. And most Black Americans say that women should be able to serve as senior religious leaders of congregations. However, much smaller shares say they have actually heard recent sermons on sexism at their houses of worship. They are more likely to hear messages on racial inequality, criminal justice reform, voting and protesting.

Black Americans generally express egalitarian views about gender norms in families and communities. They believe that mothers and fathers who live in the same household should share parenting and financial responsibilities. However, Black Americans are more likely to attend congregations where men’s financial role in the family and involvement in the community is emphasized more than women’s. Majorities say their congregations strongly emphasize that men should financially support their families and should also be involved parents, role models in Black communities, and active congregants. Smaller shares say their congregations stress these same roles for women, with the exception of parenting.

On issues related to sexuality, Black Americans tend to be somewhat more conservative than the larger American public. Roughly six-in-ten Black Americans say that homosexuality should be accepted in society, compared with seven-in-ten in the larger public. And half of Black Americans say religious leaders should not perform same-sex marriage ceremonies, a slightly higher share than in the larger public. Additionally, three-in-ten religiously affiliated Black adults say avoiding sex before marriage is essential to their faith, while an additional 44% say it is “important, but not essential.”

On some of these questions, Black Protestants express more conservative views than Black Catholics. Protestants are much less likely than Catholics to say that homosexuality should be accepted by society, for example, and also less inclined to feel that clergy should perform same-sex marriage ceremonies. The survey also finds that immigrants from Africa often express more traditionalist views on gender than those born in the U.S. or the Caribbean. For instance, African immigrants are more likely than U.S.-born Black Americans and those born in the Caribbean to say that fathers should be the primary breadwinners in families and that mothers should take the lead in child-rearing, though majorities still say that child-rearing responsibilities should be shared equally.

The rest of this chapter explores how gender, sexuality and religion intersect in Black Americans’ views on family and community.

Similar shares of religiously affiliated Black women and men say that opposing sexism is essential to their faith. Furthermore, majorities across all generations express this view. 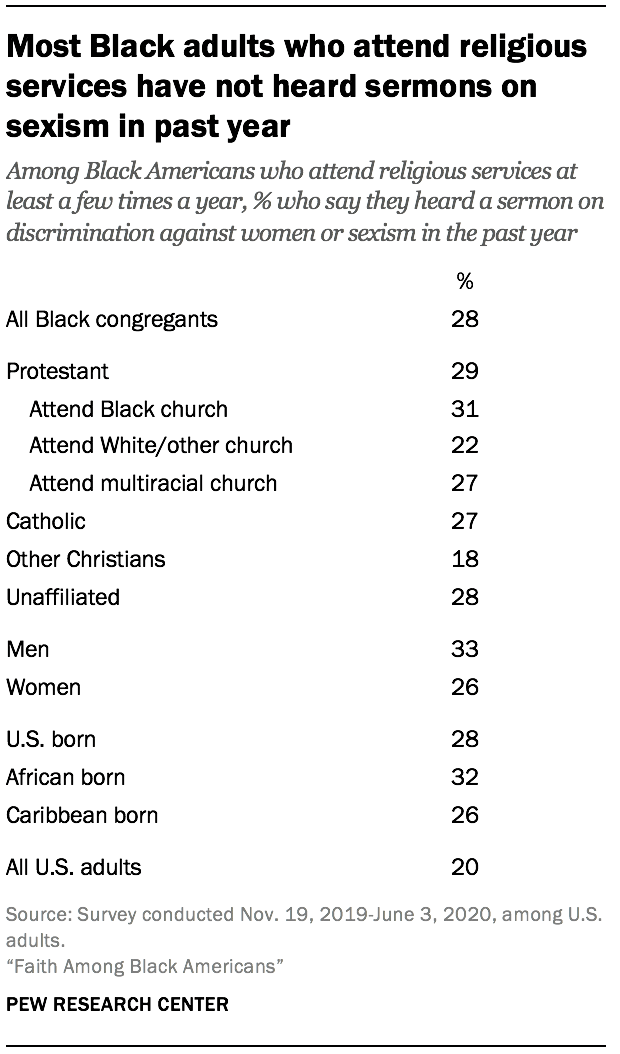 Although opposing sexism is essential to the majority of Black Americans’ faith or sense of morality, only about three-in-ten of those who attend religious services at least a few times a year (28%) say they heard a sermon, lecture or group discussion about that topic in the year prior to the survey. They are more likely to hear sermons about racial inequality (42%) and various forms of political engagement, such as voting and protesting (39%).

Similar shares of Protestants (29%) and Catholics (27%) say they have heard sermons about discrimination against women. And among the relatively few religiously unaffiliated Black Americans who attend religious services, a similar share (28%) say they have heard these types of sermons. Among Protestants, those who attend Black churches (31%) are slightly more likely to hear sermons on sexism than those who attend White or other race churches (22%).

The share of men who report hearing these kinds of sermons (33%) is slightly higher than the share of women who say this (26%).

Women as senior leaders of congregations 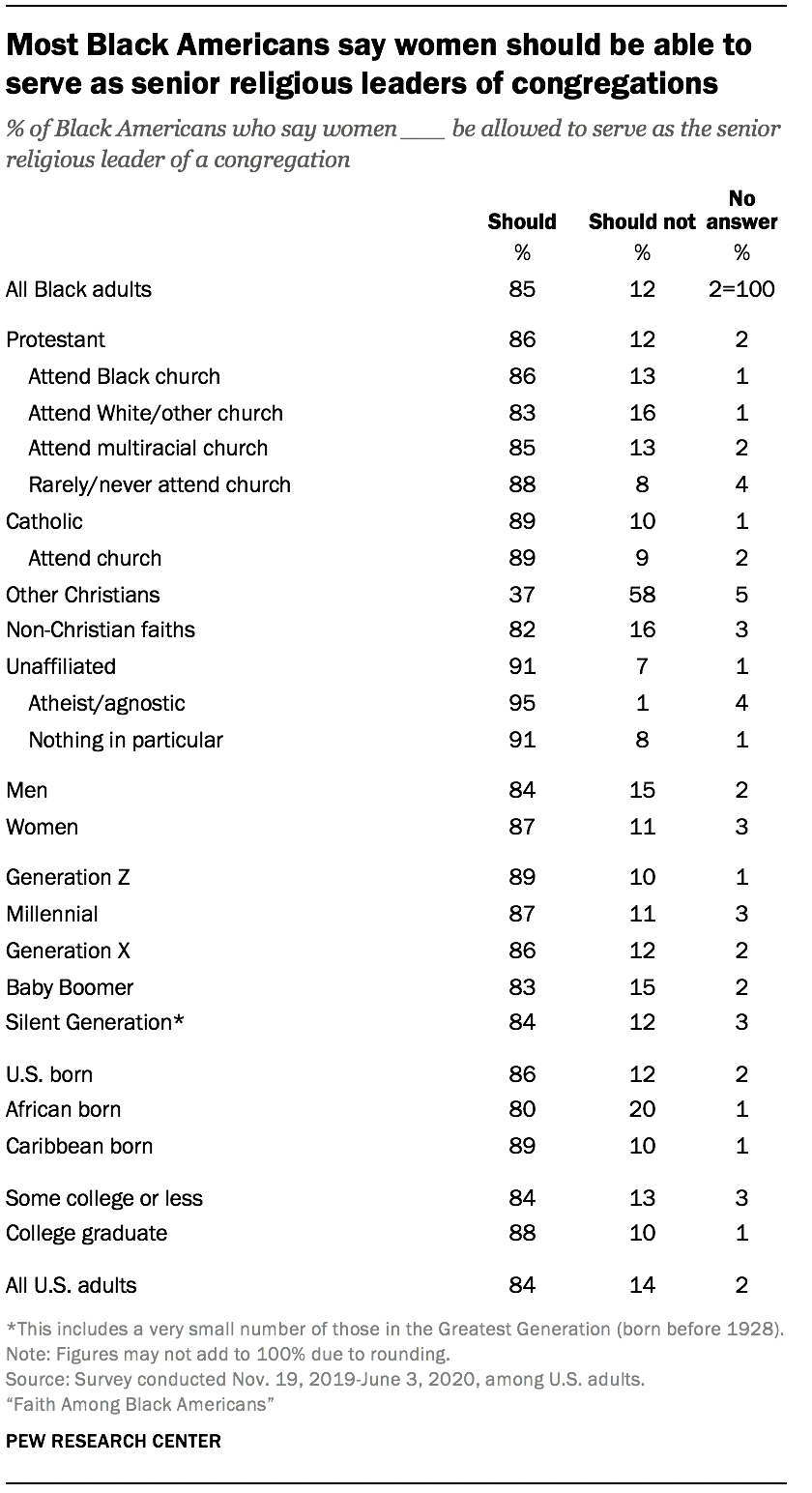 A large majority of Black Americans (85%) say that women should be able to serve as the senior religious leader of a congregation. Large majorities of Protestants (86%) and Catholics (89%) support this view, as do 87% of women and 84% of men.

Among the groups analyzed in this survey, the largest exception to this pattern is Christians who identify with a tradition other than Protestantism or Catholicism. Within this group (which is mostly Jehovah’s Witnesses), 58% say women should not be able lead congregations.

Black Americans generally express egalitarian views about gender norms in their families and communities. The majority say that mothers and fathers should be equally responsible for family finances in households where both are present (73%), while a quarter say that fathers should take the lead.

A somewhat larger share of Black “nones” (79%) and Catholics (78%) than Protestants (71%) support equally shared financial responsibilities for mothers and fathers. And Protestants who attend multiracial congregations (72%) or Black churches (70%) are slightly more likely than those in White or other congregations (63%) to say that mothers and fathers should equally share the financial burden for the family.

Black adults who were born in the Caribbean (75%) or the United States (74%) are more inclined to support shared financial responsibilities than those born in Africa (57%). Among African immigrants, four-in-ten (42%) say fathers should be the main breadwinners.

Black women (76%) are somewhat more likely than Black men (69%) to say mothers and fathers should share financial responsibilities equally. Meanwhile, Black Americans who have never been married (77%) are more likely to believe in splitting financial responsibilities than those who are currently married (69%). About three-quarters of Black adults in Gen X or younger generations take this stance on family finances, compared with a smaller share among members of the Silent Generation (66%).

An even larger majority of Black Americans believe that mothers and fathers should split childcare responsibilities in households where both parents are present (86%), similar to the share of U.S. adults overall who believe this (84%). Most demographic groups share this view, with few differences among them. African-born Black Americans again stand out; about a quarter (23%) say mothers should be mostly responsible for childcare. 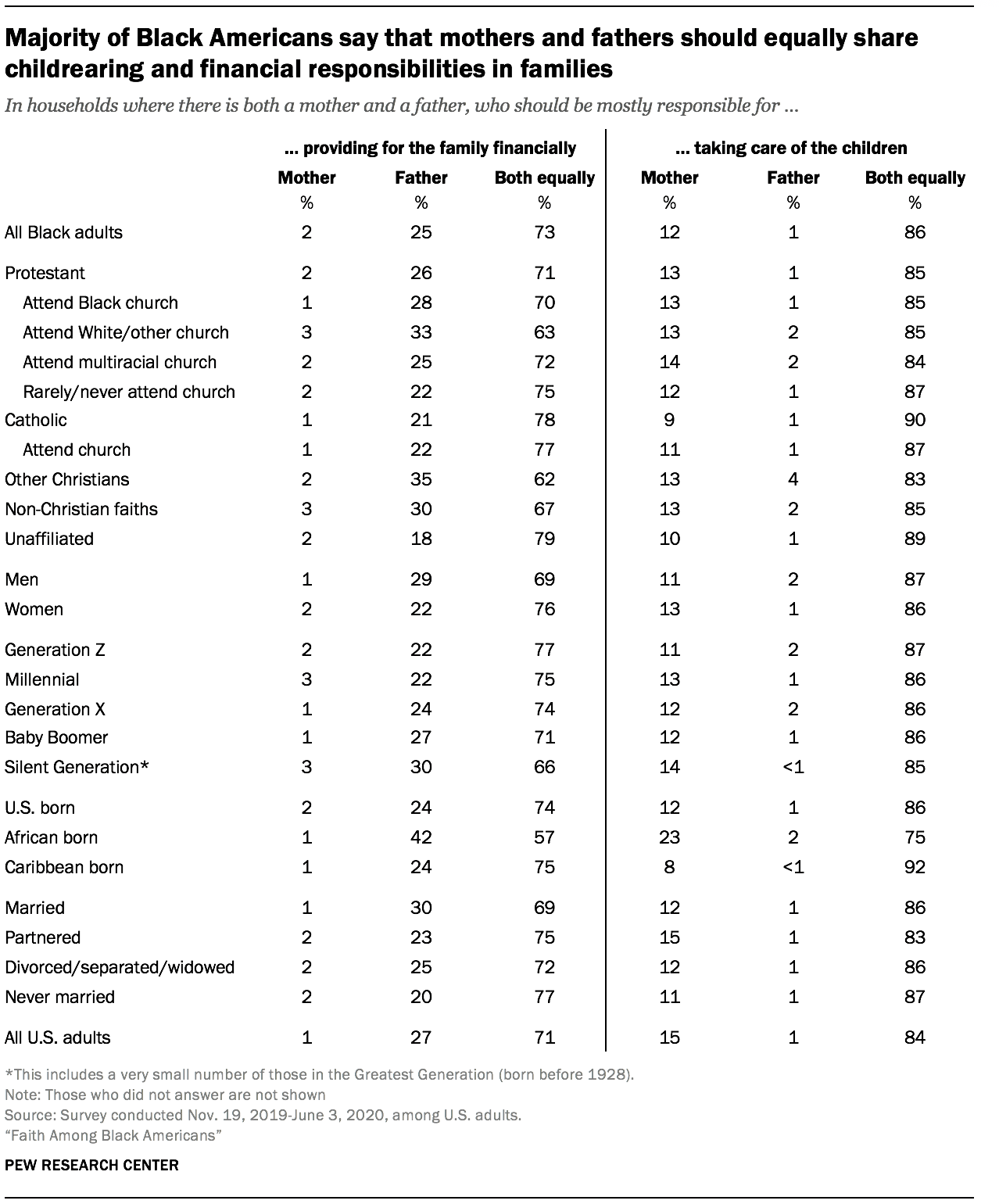 About seven-in-ten Black congregants report hearing “a lot” of emphasis on the need for both men (71%) and women (69%) to be involved parents. But when it comes to being involved in congregations and being role models in Black communities, somewhat fewer hear these messages emphasized for women. For instance, 61% of Black congregants say their houses of worship strongly emphasize the need for men to be good role models, and 52% hear this emphasized for women.

There is an especially large gap on the issue of financial support within families: Only about a third of Black adults who attend religious services (35%) say that their congregations stress that women should support their families financially, compared with 64% who say their congregations emphasize this for men.

In general, Black congregants are more likely than U.S. religious service attenders overall to hear these types of messages in their house of worship, although there are some similar patterns in both groups. For example, among all U.S. congregants, 49% say they their places of worship emphasize that men should financially support their families, compared with just 20% who hear this message about women. 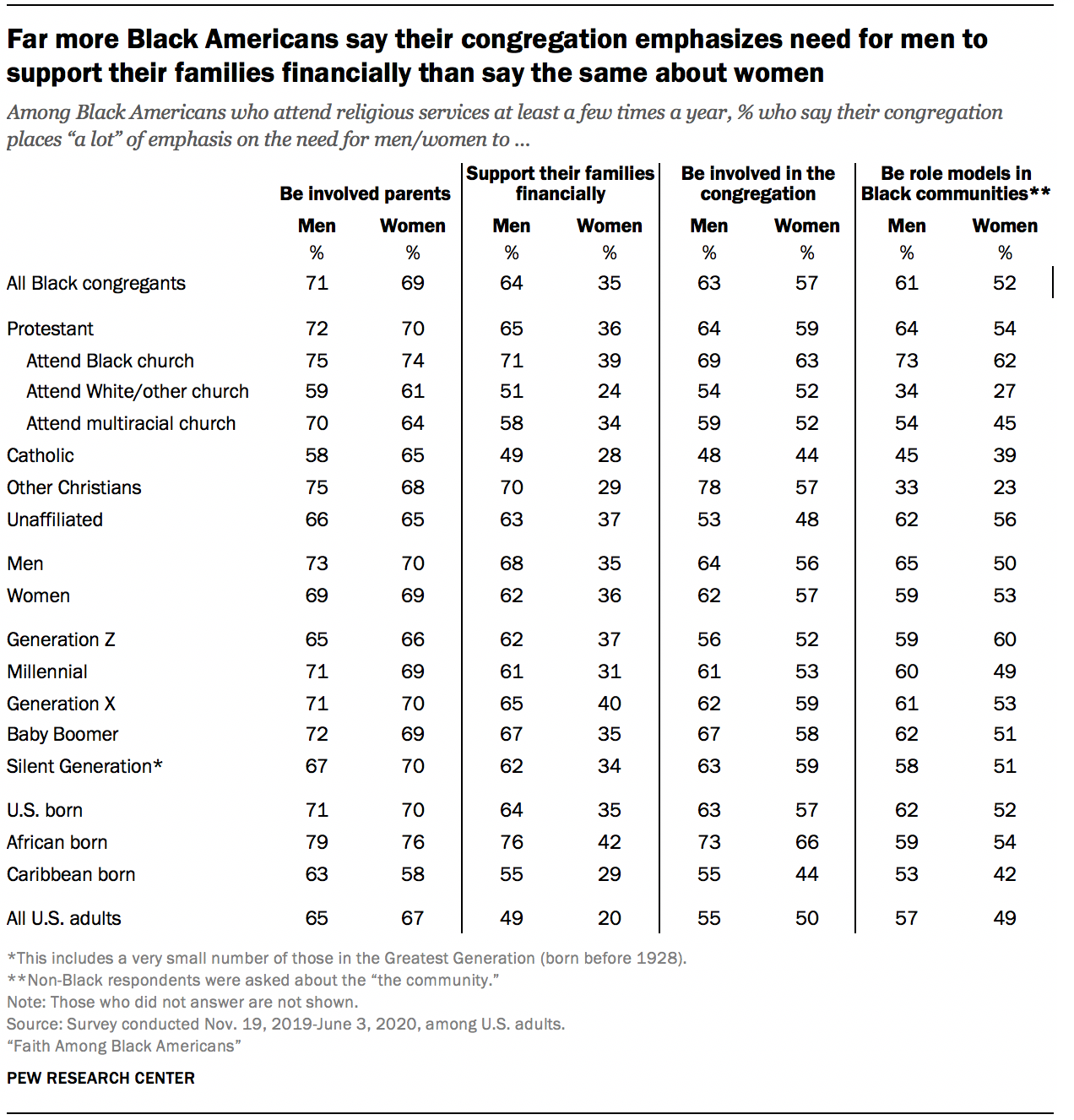 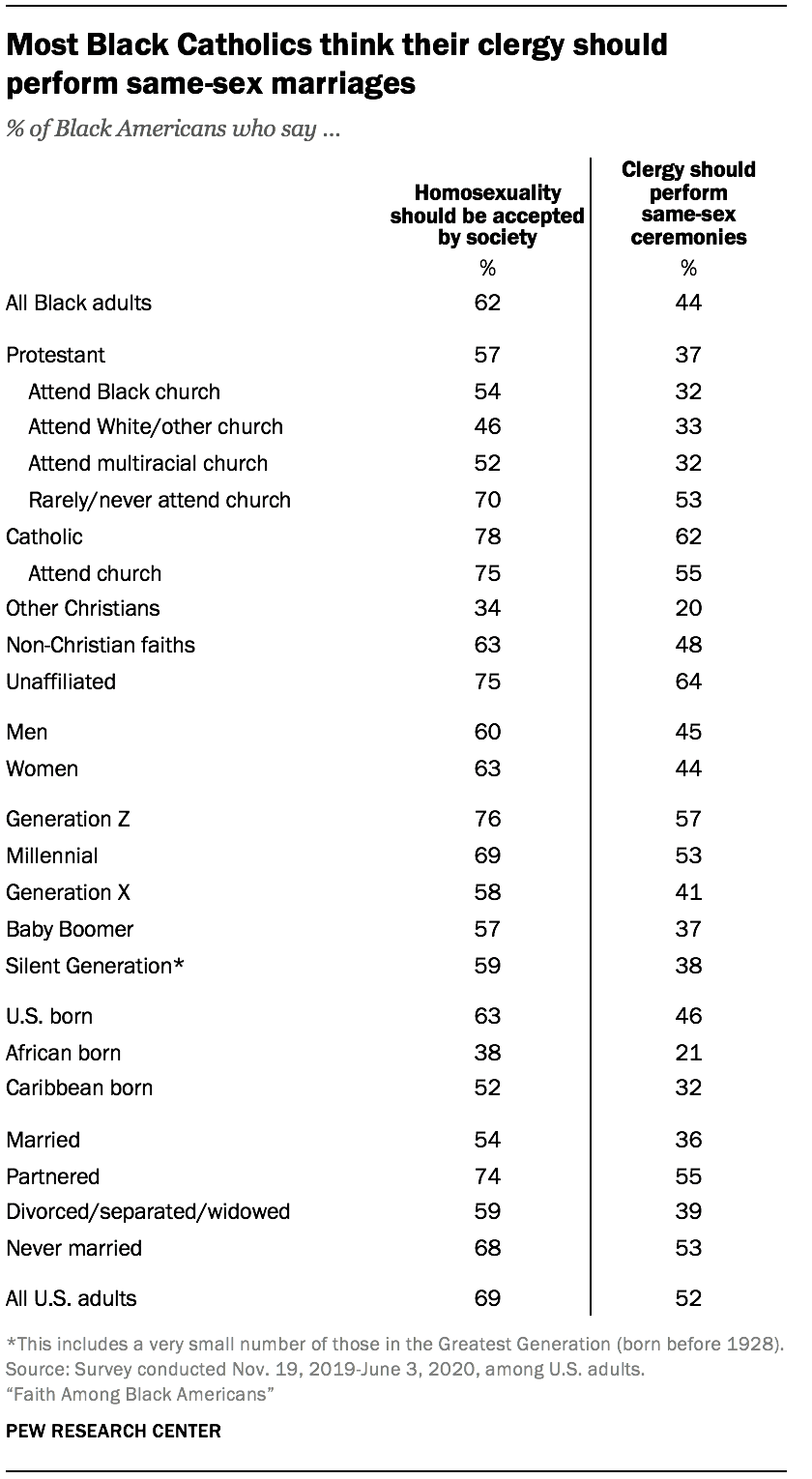 About six-in-ten Black Americans express the view that homosexuality should be accepted by society (62%), while 32% say it should be discouraged.

When it comes to ethnicity, those who identify as Black only (60%) are less likely than those who identify as multiracial (77%) or Black and Hispanic (72%) to say that homosexuality should be accepted in society. And Black adults born in the United States (63%) or the Caribbean (52%) are more likely than those born in Africa (38%) to share this view.

Younger Black Americans are more accepting of homosexuality than their elders, with adults who are a part of Generation Z (those ages 18 to 23) more likely than each older generation to agree with this stance. This is in line with previous research showing that, among U.S. adults overall, young people are consistently more accepting of homosexuality than older people.

While the majority of Black Americans say homosexuality should be accepted by society, fewer than half (44%) say their religious leaders should perform wedding ceremonies for same-sex couples – lower than the comparable share in the general public (52%). About half of Black adults (51%) say their clergy should not officiate such marriages. Again, Protestants (37%) are much less likely than Catholics (62%) and the religiously unaffiliated (64%) to say that religious leaders should preside over same-sex weddings.

Response patterns by age, race and ethnicity, and country of birth on this question mirror those seen on the question about society’s acceptance of homosexuality. In other words, older Black Americans, those who identify as Black only, and those born in Africa and the Caribbean all are less likely than others to say their clergy should officiate same-sex weddings.

Very few (2%) take the view that homosexuality should be discouraged but that clergy should perform same-sex marriage ceremonies, while 9% refuse to answer one or both questions.

Three-in-ten Black Americans who are affiliated with a religious group say that avoiding sex before marriage is essential to what it means to be faithful to their religious tradition, while an additional 44% say it is “important, but not essential.” The share of Black Protestants who say avoiding premarital sex is essential to their faith (30%) is higher than that of Black Catholics (16%). Among religiously unaffiliated Black Americans, meanwhile, just 9% say that avoiding premarital sex is essential to what “being a moral person” means to them, while three-in-ten say avoiding sex before marriage is “important, but not essential” to their sense of morality (29%).

(For more details on what Black Americans see as essential to their faith, see Chapter 3.)

Religiously affiliated Black adults who attend religious services at least weekly (46%) are more likely to say avoiding premarital sex is essential to their faith than those who attend once or twice a month or a few times a year (21%) or seldom or never (16%). And religiously affiliated Black women and African immigrants are more likely to say this than Black men and U.S.-born adults.

Overall, Black Americans are more likely than the general population to say avoiding premarital sex is essential to their faith or sense of morality (30% vs. 23%).

Next: 8. Religion and politics
← Prev Page
Page4Page5Page6Page7You are reading page8Page9Page10Page11Page12Page13Page14
Next Page →