While the worldwide population of all non-Orthodox Christians has virtually quadrupled since 1910, the Orthodox population has merely doubled, from approximately 124 million to 260 million. And as the geographical center of the overall Christian population has shifted since 1910 from its centuries-old European base into developing nations in the Southern Hemisphere, most Orthodox Christians (roughly 200 million, or 76%) still live in Central and Eastern Europe (including Greece and the Balkans).

Meanwhile, there also are substantial populations of Orthodox Christians in the Middle East-North Africa region, mostly in Egypt (an estimated 4 million in 2010), with smaller numbers in Lebanon, Syria and Israel.

In all, 19 countries around the world have at least a million Orthodox Christians, including Romania (19 million) and Greece (10 million). Fourteen countries worldwide have Orthodox majorities, and all of them except Eritrea and Cyprus are in Europe. (In this report, Russia is classified as a European country.)

Central and Eastern Europe remains the main base for Orthodox Christians, and is home to more than three-quarters (76%) of them. An additional 15% live in sub-Saharan Africa, 4% live in the Asia-Pacific region, 2% live in the Middle East and North Africa, and about 1% live in Western Europe. Nearly 1% live in North America, while even fewer live in Latin America. This geographic distribution distinguishes Orthodox populations from the other major Christian groups, which are far more evenly distributed around the world.

While the current share of Orthodox Christians living in Europe overall (77%) does represent a decline since 1910, when 91% of Orthodox Christians were living there, the share of the total Christian population living in Europe has decreased much more sharply, from 66% in 1910 to 26% in 2010. Indeed, nearly half (48%) of the broader Christian population now lives in Latin America and Africa, up from 14% in 1910. 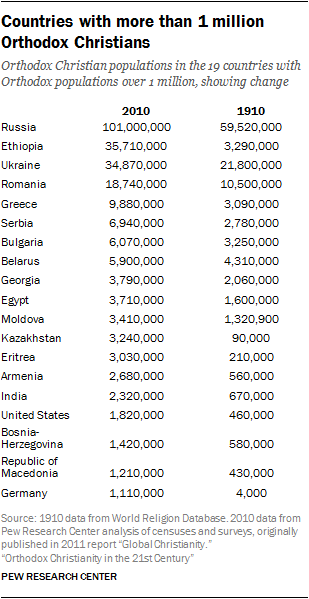 In 1910, Russia’s Orthodox population was 60 million, but the number of Russians identifying as Orthodox dropped steeply during the Soviet era (to 39 million in 1970), when the Communist government was repressing religious worship and promoting atheism.8 Since the fall of the USSR, though, the number of Orthodox Christians in Russia has rebounded sharply, to more than 100 million.9

Results from a Pew Research Center survey conducted in 2015 suggest that the end of communism played a role in the rise of religion in this part of the world; more than half (53%) of Russians who say they were raised without religion but are now Orthodox cite an increasing societal acceptance as a major reason for their shift. 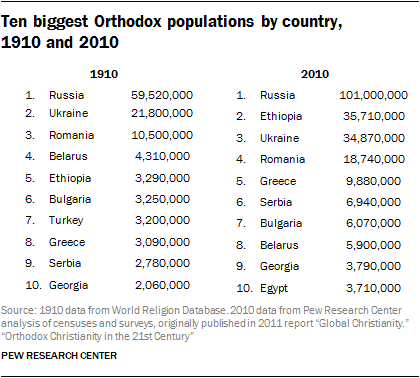 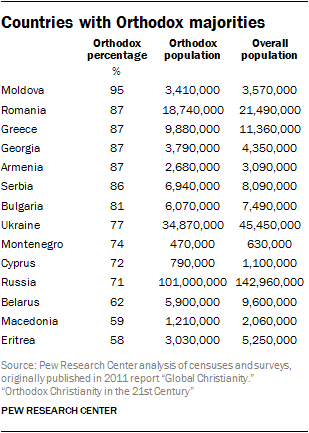 There are 14 Orthodox-majority countries in the world, and all are located in Europe except for Eritrea, which is in sub-Saharan Africa, and Cyprus, which is categorized in the Asia-Pacific region in this report. (Ethiopia’s 36 million Orthodox Christians are not a majority; they comprise about 43% of Ethiopia’s population.)

The country with the highest percentage of Orthodox Christians is Moldova (95%). In Russia, the largest of the Orthodox-majority countries, about seven-in-ten people (71%) are Orthodox. The smallest country with an Orthodox majority is Montenegro (which has a total population of 630,000), where 74% of the population is Orthodox.10

Orthodox diasporas have developed in Americas and Western Europe

Over the last century, several sizable diaspora communities of Orthodox Christians have developed in the Americas and Western Europe, areas that, a century ago, had only small Orthodox populations.

In the Americas, there are three countries with over 100,000 Orthodox Christians that had fewer than 20,000 a century ago: Canada, Mexico and Brazil. The United States, which has 1.8 million Orthodox Christians, already had 460,000 in 1910.

Orthodoxy in the United States

The presence of Orthodox Christians within the present boundaries of the United States dates to 1794, when a small group of Russian missionaries arrived in Kodiak, Alaska, to proselytize its inhabitants. This missionary work continued during the 1800s, but the bulk of Orthodoxy’s growth in the United States owes to late 19th- and early 20th-century immigration from countries across Central and Eastern Europe.11 By 1910 nearly half a million Orthodox Christians lived in the United States, and in 2010 the figure was approximately 1.8 million – about half of 1% of the U.S. population.

The Orthodox presence in the U.S. is a fragmented one. The population’s splintered state across more than 21 denominations reflects varied ethnic ties to countries around the world with their own self-governing Orthodox patriarchates.12 Nearly half (49%) of U.S. Orthodox Christians identify as Greek Orthodox, 16% as Russian Orthodox, 3% as Armenian Orthodox, 3% as Ethiopian Orthodox and 2% as Coptic/Egyptian Orthodox. In addition, 10% identify with the Orthodox Church in America, a self-governing denomination based in the United States that, despite its Russian and Greek roots, has many parishes that are predominantly Albanian, Bulgarian and Romanian. Another 8% of Orthodox Christians in the U.S. say they are Orthodox without specifying further (6%) or are ambiguous about their affiliation (2%).13

By common measures of religiosity, Orthodox Christians in the United States are somewhat less likely than most other American Christian groups to say religion is very important in their lives (52%) and to say they attend church at least once a week (31%). By comparison, 68% of U.S. Christians overall say religion is very important to them and 47% say they are weekly churchgoers. 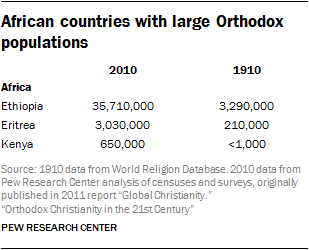 It is Africa, though, that has seen the largest Orthodox population growth outside of Central and Eastern Europe. Ethiopia, where the Orthodox population has increased over the last century from 3 million to 36 million, is not part of an Orthodox diaspora; its Orthodox history dates to the fourth century of Christianity, more than half a millennium before Christianity developed a substantial following in Russia. The growth in Ethiopia’s Orthodox population over the last century, as well as in neighboring Eritrea, owes largely to natural population growth in the countries. Orthodox Christianity in Kenya, on the other hand, developed during the early to mid-20th century through the assistance of missionaries and became affiliated with the Eastern Orthodox Patriarchate of Alexandria and All Africa in the 1960s.15

Next: 2. Orthodox Christians are highly religious in Ethiopia, much less so in former Soviet Union
← Prev Page
Page1You are reading page2Page3Page4Page5Page6Page7
Next Page →