U.S. Muslims clearly express concerns and worries about the future of the country and their place in American society in the wake of Donald Trump’s election as president. Most Muslims are dissatisfied with the direction the country is going, which is a reversal of opinion from 2011. Majorities of U.S. Muslims view the Republican Party and Trump as unfriendly toward Muslim Americans. And most Muslims say anti-Muslim discrimination is prevalent in American society. These worries and concerns are most pronounced among Muslim women and among those born in the United States.

But there are also signs of optimism among the Muslim community. Even though three-quarters of Muslims say they face a lot of discrimination, there has been an uptick in the share who say someone has expressed support for them because they are Muslim. And about half of Muslims say the American people, as a whole, are friendly toward Muslim Americans.

This chapter also examines opinions about government monitoring of phone calls and emails, treatment of the Muslim community by media outlets and attitudes about the acceptance of Muslims and Islam into mainstream American society. 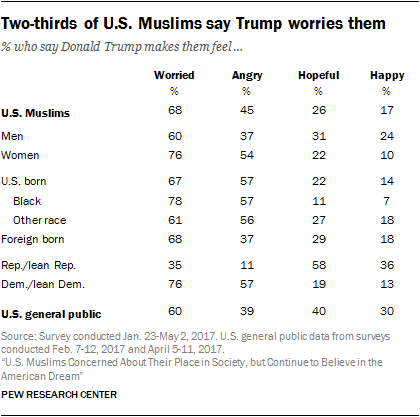 The survey asked Muslim Americans if Donald Trump spurred in them any of four different emotions: worry, anger, hope and happiness. Far more Muslims express negative emotions associated with Trump than positive ones. 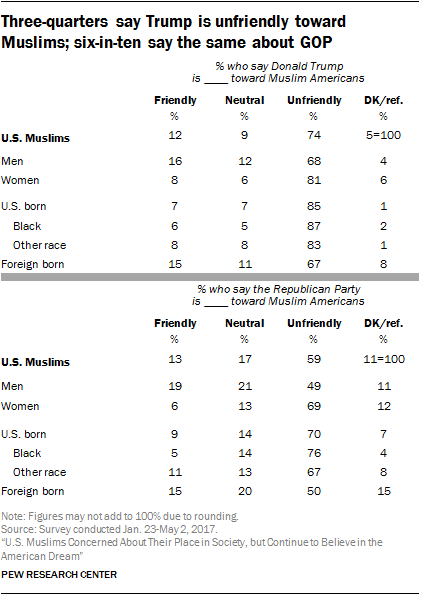 In their own words: What Muslims said about Trump

Pew Research Center staff called back some of the Muslim American respondents in this survey to get additional thoughts on some of the topics covered. Here is a sampling of what they said about President Donald Trump:

“In terms of the challenges we’re dealing with as a people, humanity … leadership has a role to play. … When I contrast our president with some of the leaders out there and some of the leaders we’ve had, whether Democrats or Republican – it doesn’t matter. There’s a lack of leadership. And the tone he uses to refer to people – Muslims, blacks, Mexicans, Jews. The tone he uses is divisive. It’s poor leadership.” – Muslim man

“Donald Trump is a racist, OK? I’m a black woman. He’s not for the blacks, he’s not for the poor. He’s for himself, is what I believe.” – Muslim woman in 30s

“In his Saudi Arabia meeting, he said that Muslims are one of the greatest faiths in the world. While I do appreciate that, what he said a year ago was different.” – Muslim man under 30

“A lot of us Muslims, we don’t feel safe here anymore. Trump is kind of painting a bad picture for Muslims.” – Muslim woman under 30

“I believe Mr. Donald Trump is a very good president and he can do a lot to the economy because he spent his life as a businessman and engineer, but for politics, he did kind of strong decisions that tended to be unfair, like when he said that seven Muslim countries are not supposed to enter the United States and stuff like this. You can’t treat all the people with the same guilt. Get the people who caused the trouble and prosecute them. It makes you look not that great to the whole world.” – Muslim man over 60

“I am not even sure how I feel. I wish he would just shut up. I thought he would be for the better good of the country. Is it him? Is it the media? I will say I was always Republican and never voted any other way and now I am saying, ‘What is going on?’ I am the first to say we should be careful who to let in the country, but there is a more diplomatic way to do it. For an educated man he is not making educated decisions. And I have family from outside this country. My husband is from Iran. So do I think we should be careful with Iran. My husband has been here since 1985. … I don’t think it is wrong for the government to be careful, but a lot of innocent people are being hurt by this. There are family members I might not be able to see again. They would come every year and now I cannot see them. I believe in protecting our country but the way he is going about it is not the best way.” – Muslim woman in 40s

“I had more of a feeling there might be change. I said they should give him a chance. So far I don’t want to say he did a bad job. I like his vibe. He gets things done. But the health care bill is not so good. It is supposed to be about taking care of the poor and elderly and that is what the bill does not cover. I feel indifferent. I am neither poor nor elderly. It is not a good thing. My opinion of him is the same.” – Muslim man under 30 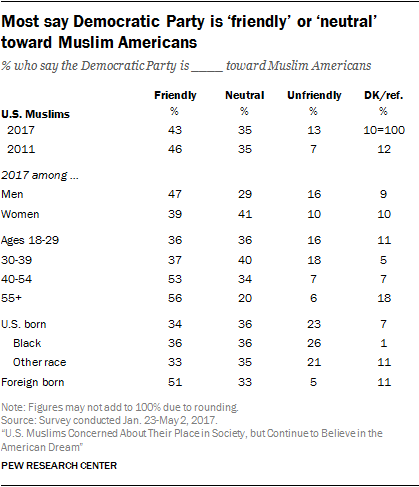 Muslims ages 40 and older and those who were born outside the U.S. are especially likely to see the Democratic Party as friendly toward Muslims. 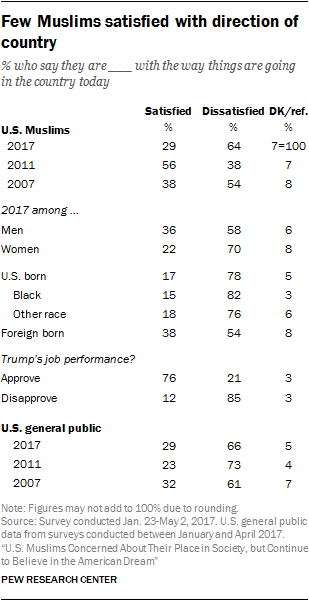 Overall, three-in-ten U.S. Muslims say they are satisfied with the way things are going in the country today, while 64% say they are dissatisfied. This is a substantial shift from 2011, when the balance of opinion leaned in the opposite direction.

The change in perspective appears to be bound up, at least in part, with the outcome of the 2016 presidential election. Among Muslims who approve of Trump’s job performance (19% of U.S. Muslims surveyed), three-quarters say they are happy with the direction of the country (76%). But among the much larger group of Muslims who disapprove of Trump’s handling of his job as president, just 12% are satisfied with the way things are going in the country, while 85% are dissatisfied. 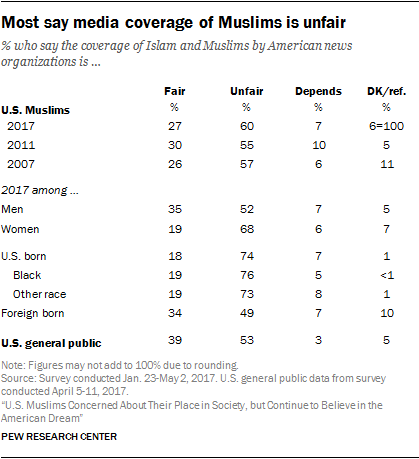 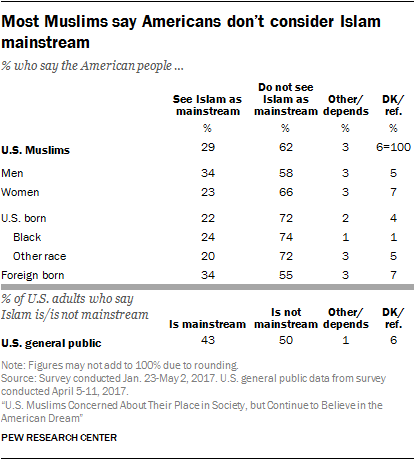 Just three-in-ten U.S. Muslims say the American people see Islam as mainstream; this view is most pronounced among Muslim men and Muslims born outside the U.S. 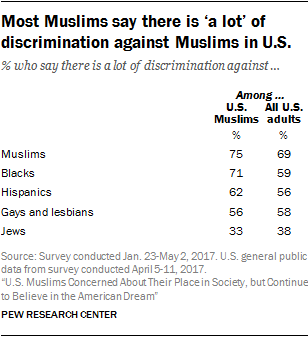 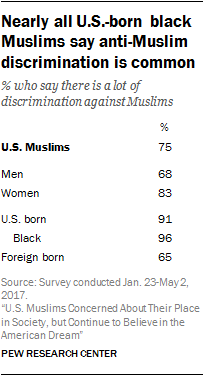 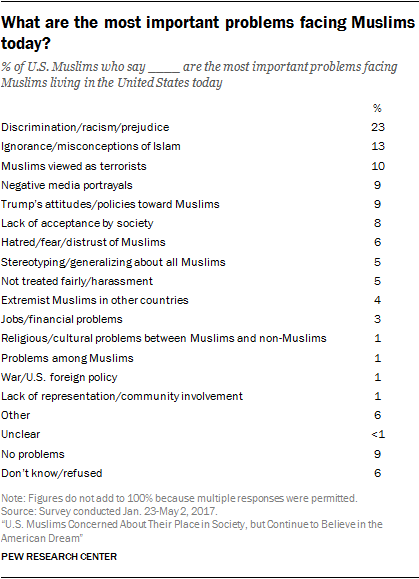 Muslim Americans also were asked to describe, in their own words, the most important problem facing Muslims today. The responses most often center on discrimination, persecution, and misconceptions about Islam and Muslims by the rest of U.S. society.

Half of U.S. Muslims say they faced discriminatory treatment in past year

In addition to general questions about discrimination against their community, respondents were asked about their experiences in the past year with five specific forms of discrimination, as well as whether they have seen anti-Muslim graffiti in their communities. One-third (32%) of Muslims say people have acted suspicious of them because they are Muslim. About one-in-five have been called offensive names (19%) or been singled out by airport security (18%). In addition, 10% say they have been singled out by other law enforcement officers, and 6% say they have been physically threatened or attacked. All told, 48% of Muslims say they have experienced at least one of these five types of incidents over the past year, up slightly over the last decade.27 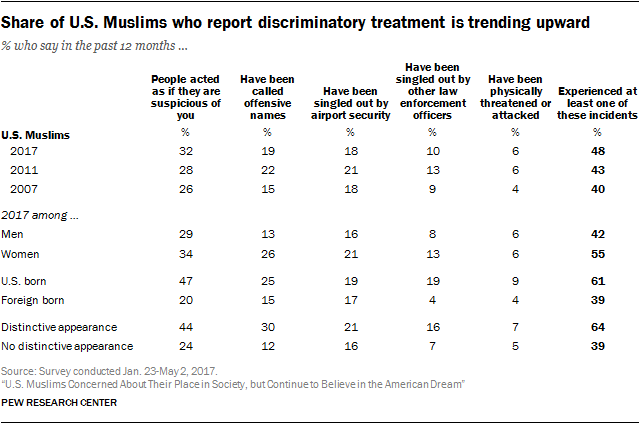 The survey also finds that about one-in-five Muslims (18%) say they have seen anti-Muslim graffiti in their local communities.

Most Muslims think their communications are monitored by government, but figure is even higher among general public 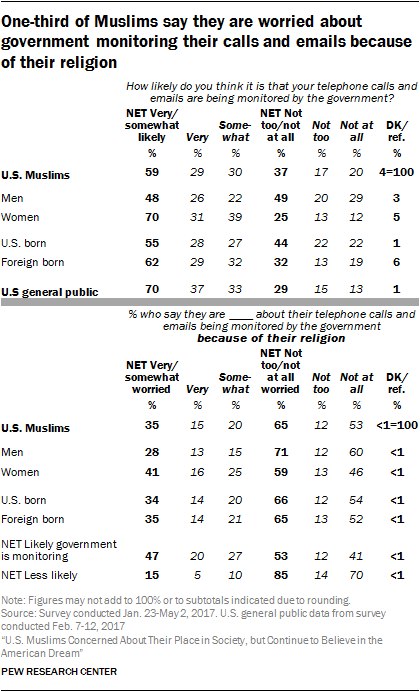 About six-in-ten U.S. Muslims (59%) say it is “very likely” (29%) or “somewhat likely” (30%) that their calls and emails are being monitored by the government. Muslims are less likely than the general public to think their communications are being monitored: 70% of the population as a whole thinks this type of surveillance is either very (37%) or somewhat (33%) likely. (This question did not mention religion as a reason for potential government surveillance.)

Among Muslim Americans, women are more likely than men (70% vs. 48%) to think their communications are at least somewhat likely to be subject to government monitoring.

Life in the U.S.: Getting harder for many, but with significant bright spots 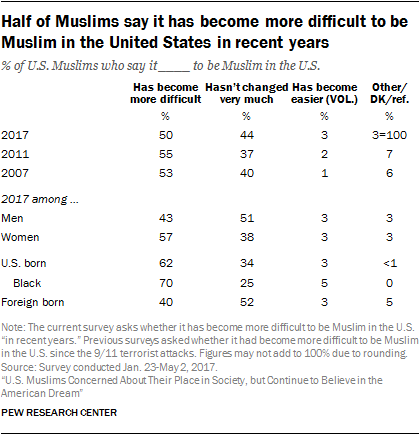 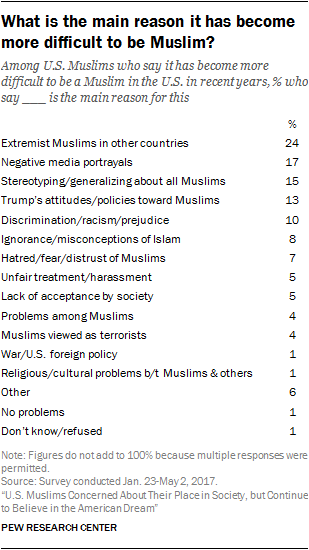 The survey asked respondents who said it has become more difficult to be Muslim in recent years to share, in their own words, the main reason this is the case. The most common responses (volunteered by 24% of those who say it has become more difficult to be Muslim in the U.S.) centered on extremist Muslims in other countries. For example, one respondent said that Islam has been “hijacked by people called ISIS who I don’t believe are Muslim because they don’t practice what Islam says.” And another respondent said that “terrorist attacks toward American people make a lot of Americans nervous about having Muslims on American soil.”

An additional 17% cited negative portrayals of Muslims in the media, including movies and television shows. And similar shares mentioned stereotyping of Muslims (15%) and Donald Trump’s attitudes and policies toward Muslims (13%) as the main reasons it has recently become more difficult to be Muslim in the U.S. 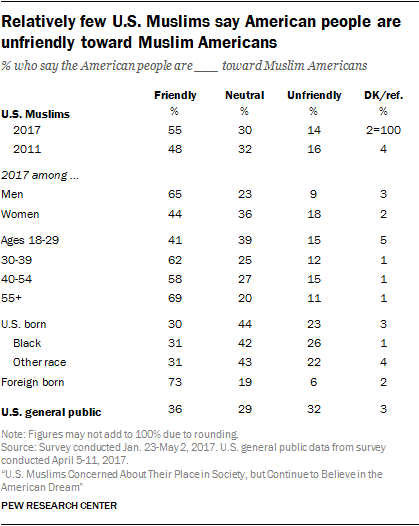 But while Muslims say they face a number of challenges and express a variety of concerns about life in the U.S., the picture they paint of their experiences is also colored with multiple bright spots. For example, 55% of U.S. Muslims say the American people, as a whole, are friendly toward Muslims, and an additional three-in-ten say the American people are neutral toward Muslims. Just 14% say Americans are unfriendly toward U.S. Muslims.

The view that the public, as a whole, is friendly toward Muslims has become somewhat more widely held since 2011, and it is especially common among foreign-born Muslims, among whom 73% say the American people are friendly toward Muslims. Similarly, seven-in-ten Muslims ages 55 and over and about two-thirds of Muslim men say the same.

The general public is less likely than Muslims to say the American people are friendly toward Muslims; just 36% of U.S. adults overall say this. 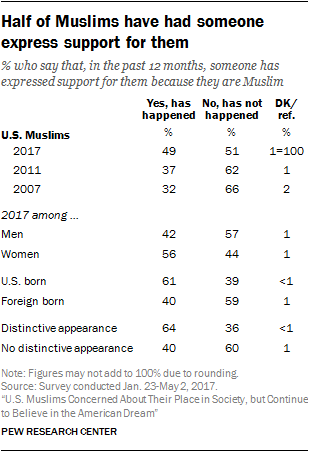 And while Muslim women, U.S.-born Muslims and those who have something distinctively Muslim about their appearance are especially likely to say they have experienced discriminatory treatment in recent months, these Muslim subgroups also report receiving expressions of support at higher rates.

Next: 4. Political and social views
← Prev Page
Page1Page2Page3You are reading page4Page5Page6Page7Page8Page9Page10Page11
Next Page →

U.S. Muslims Concerned About Their Place in Society, but Continue to Believe in the American Dream 1. Demographic portrait of Muslim Americans 2. Identity, assimilation and community
3. The Muslim American experience in the Trump era
Trump sparks worry, viewed as unfriendly by Muslim AmericansMuslims feel they face unfair media coverage, discriminationHalf of U.S. Muslims say they faced discriminatory treatment in past yearMost Muslims think their communications are monitored by government, but figure is even higher among general publicLife in the U.S.: Getting harder for many, but with significant bright spots
4. Political and social views 5. Terrorism and concerns about extremism 6. Religious beliefs and practices 7. How the U.S. general public views Muslims and Islam Acknowledgements Appendix A: Glossary Appendix B: Survey methodology