The political profile of Muslim Americans is much the same today as it was when Pew Research Center first comprehensively surveyed this population a decade ago: Muslims constitute a strongly Democratic constituency. Three-quarters of Muslim voters say they cast a ballot for Hillary Clinton in the 2016 presidential election, and two-thirds of U.S. Muslims overall say they disapprove of the way Donald Trump is handling his job as president.

There has, however, been one notable change in the social and political views of U.S. Muslims: They have become much more accepting of homosexuality over the past decade, matching a similar shift that has occurred among the public overall. Indeed, the share of Muslim Americans who say homosexuality should be accepted by society has nearly doubled since 2007.

Partisanship and ideology: U.S. Muslims are a strongly Democratic constituency

Fully two-thirds of U.S. Muslims identify with or lean toward the Democratic Party (66%). Far fewer say they are Republican or lean Republican (13%), while one-in-five say they prefer another party or are political independents and do not lean toward either major party. Muslim Americans’ partisan composition is little changed over the last decade, and they remain much more strongly Democratic than the public as a whole.

Muslim women are somewhat more likely than Muslim men to affiliate with the Democratic Party (73% vs. 59%). 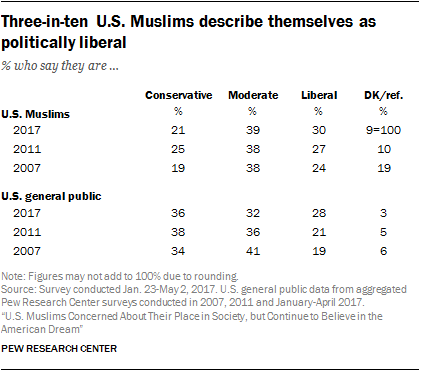 About four-in-ten Muslims say they voted in 2016 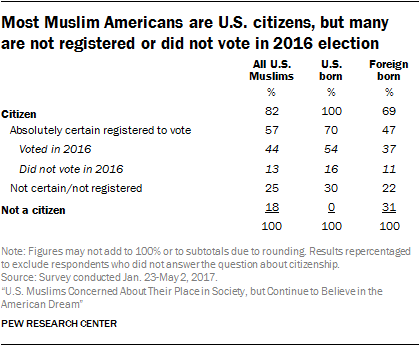 Roughly eight-in-ten Muslim Americans – including 69% of those born outside the United States – say they are U.S. citizens. And about two-thirds of citizens (57% of all U.S. Muslims) say they are absolutely certain that they are currently registered to vote.29 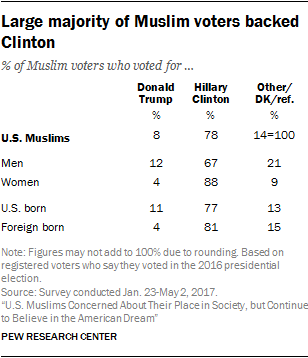 Muslims who voted in the 2016 presidential election overwhelmingly say they voted for Hillary Clinton over Donald Trump (78% vs. 8%). Support for Clinton was especially strong among Muslim women voters (88%). 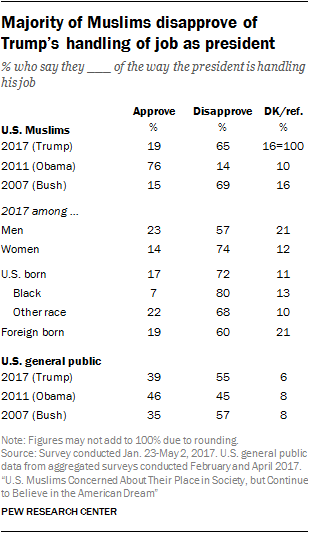 About two-in-ten U.S. Muslims overall (19%) say they approve of the way Trump is handling his job as president. Far more (65%) disapprove, and 16% express no opinion. Trump gets much lower marks from Muslims than Barack Obama did in 2011 (when 76% of Muslims approved of Obama’s performance) and roughly the same approval rating that George W. Bush received from Muslim Americans in 2007 (15%).

Trump’s approval ratings are particularly low among U.S.-born black Muslims: Just 7% in this group approve of his job performance.

Most Muslims say Islam and democracy are compatible 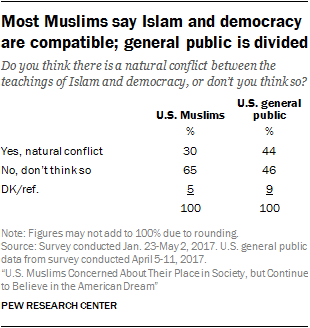 The survey asked respondents who said there is a natural conflict between Islam and democracy to explain, in their own words, why they see such a conflict. The most common response among both Muslims and the general public cited some basic incompatibility or tension, with many saying that Islam and democracy have conflicting principles. For example, one Muslim respondent said, “there is possibly a bit of a barrier between the two,” while another said there is a “difference of morals.”

Among those who see a conflict between Islam and democracy, about a quarter of Muslims (23%) and a similar share of all U.S. adults (22%) say Islam is not accepted in the U.S., which includes some in both groups who say non-Muslims do not have a sufficient understanding of Islam.

U.S. Muslims hold more conservative views than the general public about homosexuality. But, like the population at large, Muslims have become noticeably more accepting of homosexuality over the last 10 years.

Muslim Americans view immigrants as a boon to the U.S. 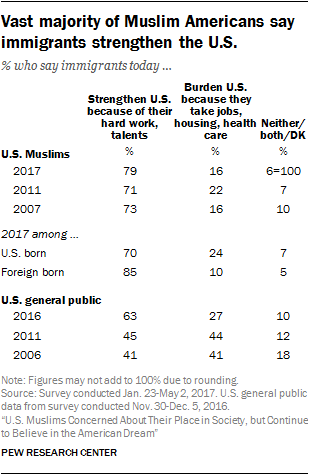 Nearly eight-in-ten U.S. Muslims – many of them immigrants themselves – say immigrants “strengthen the U.S. because of their hard work and talents” (79%). Just 16% agree with the statement that immigrants “are a burden on the U.S. because they take our jobs, housing and health care.” These views have held relatively steady over the last decade.

Most U.S. Muslims express faith in the American dream 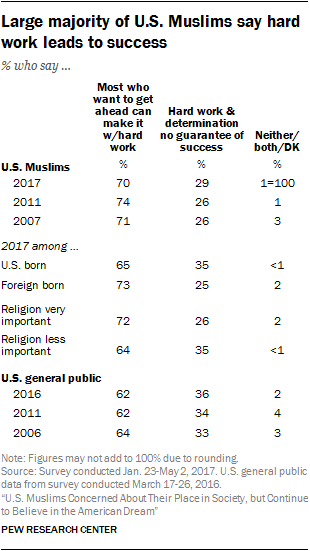 U.S. Muslims today are as optimistic about a central component of the “American dream” —the idea that people can get ahead through hard work – as they were a decade ago. Seven-in-ten Muslims endorse the idea that most people can get ahead if they are willing to work hard (70%), while three-in-ten (29%) say hard work is no guarantee of success. U.S. Muslims are somewhat more likely than the public as a whole to say that most people who work hard can thrive. 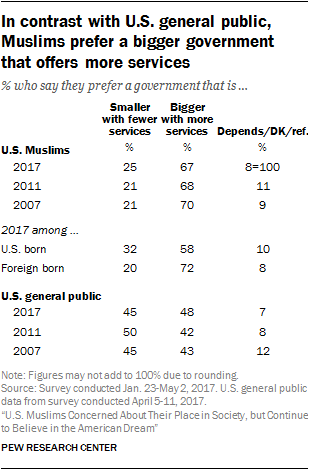 Preference for a larger government is especially strong among Muslim immigrants (72%). By comparison, among Muslims who were born in the U.S., 58% say they would prefer a bigger government, while 32% would rather have a smaller government.

Among the general public, views are more evenly divided. Nearly half of U.S. adults (48%) prefer a bigger government, while a similar share (45%) favor a smaller government.

Next: 5. Terrorism and concerns about extremism
← Prev Page
Page1Page2Page3Page4You are reading page5Page6Page7Page8Page9Page10Page11
Next Page →

U.S. Muslims Concerned About Their Place in Society, but Continue to Believe in the American Dream 1. Demographic portrait of Muslim Americans 2. Identity, assimilation and community 3. The Muslim American experience in the Trump era
4. Political and social views
Partisanship and ideology: U.S. Muslims are a strongly Democratic constituencyAbout four-in-ten Muslims say they voted in 2016Most Muslims disapprove of Trump’s job performanceMost Muslims say Islam and democracy are compatibleMuslim Americans increasingly accepting of homosexualityMuslim Americans view immigrants as a boon to the U.S.Most U.S. Muslims express faith in the American dreamMajority of Muslims prefer a bigger government offering more services
5. Terrorism and concerns about extremism 6. Religious beliefs and practices 7. How the U.S. general public views Muslims and Islam Acknowledgements Appendix A: Glossary Appendix B: Survey methodology