Since 2011, U.S. Muslims have become more concerned about extremism in the name of Islam around the world. At the same time, most believe there is little support for extremism within their own community, even as the general public disagrees. 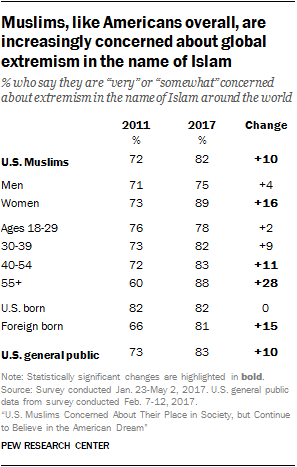 This chapter also compares the views of Muslims with those of the general public about whether killing civilians for political, social or religious causes can be justified. Large majorities of both groups reject the targeting and killing of civilians for these reasons.

Concerns grow over extremism in the name of Islam

The increased concern about global extremism is especially pronounced among Muslim women, older Muslims and Muslim immigrants. Currently, almost nine-in-ten Muslim women (89%) say they are at least somewhat concerned about extremism in the name of Islam around the world, up 16 percentage points since 2011. Among Muslims ages 55 and older, 88% express concern about global extremism in the name of Islam (including 82% who are very concerned), up 28 points since 2011. And among foreign-born Muslims, the share expressing concern about this issue has jumped 15 points over the last six years (from 66% to 81%). 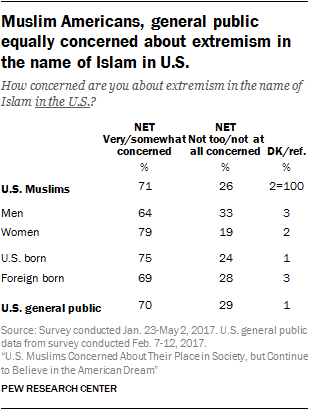 Again, women are somewhat more concerned than men about extremism in the U.S., but U.S.-born and foreign-born Muslims express similar levels of concern. 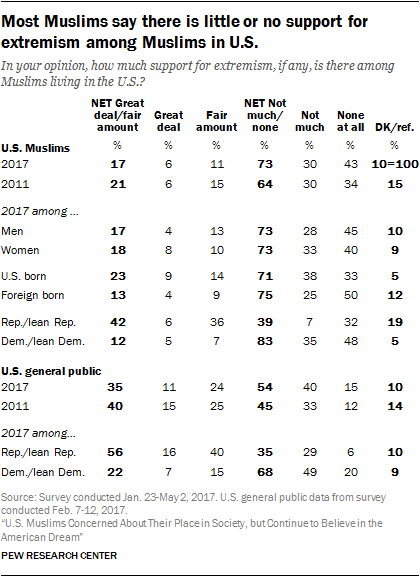 In the general public, Republicans and those who lean toward the GOP are much more likely than Democrats and Democratic leaners to say there is significant support for extremism among Muslims in the U.S., and the same pattern is seen within the U.S. Muslim community. Among the 13% of Muslims who identify with or lean toward the GOP, four-in-ten (42%) say there is a great deal or a fair amount of extremism among American Muslims, compared with just 12% of Muslim Democrats and 22% of Democrats overall who say this.

Concerns about entrapment of Muslims as part of anti-terror efforts 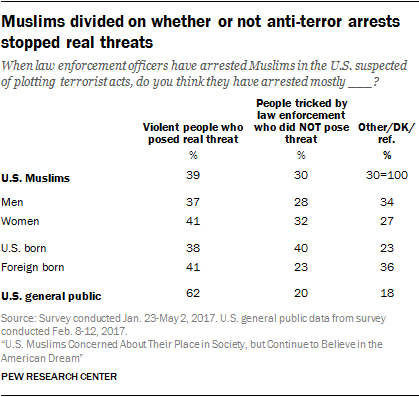 In an attempt to gauge views about violence against civilians – not only among Muslims, but also among Americans overall – Pew Research Center asked a new question in this survey. The survey asked whether “targeting and killing civilians can be justified in order to further a political, social or religious cause.”

Although both Muslim Americans and the U.S. public as a whole overwhelmingly reject violence against civilians, Muslims are more likely to say such actions can never be justified. Three-quarters of U.S. Muslims (76%) say this, compared with 59% of the general public. Similar shares of Muslims (12%) and all U.S. adults (14%) say targeting and killing civilians can “often” or “sometimes” be justified. 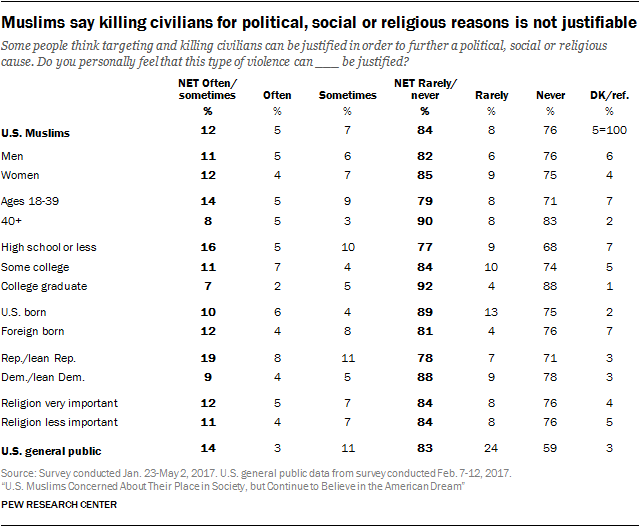 In their own words: What Muslims said about extremism and violence

Pew Research Center staff called back some of the Muslim American respondents in this survey to get additional thoughts on some of the topics covered. Here is a sampling of what they said about extremism and violence against civilians:

“I think it would never be OK. I know many Muslim countries are experiencing conflicts and Muslims are getting caught in the crossfire and it is unfortunate, but I think the only time [violence against civilians] is justified is if someone tries to harm you first. Sometimes someone attacks first, and it is terrible. It is never justified unless someone might hurt you first.” – Muslim woman under 30

“There is no political case for using violence against people. … Religion [has] allowed it in the past. … In this time in America, no.” — Muslim man under 30

“Islam is peace. We do not wish to hurt [anybody]. All this bombing? No. There’s only one God, and we can agree on that. He [does not] need us to bomb and kill people, OK? He can say it, and it’ll be done.” – Muslim woman in her 30s

“Never. I see the world from my own moral and religious standpoint: If you have a beef with someone, the only way you can justify taking to arms is if you’re attacked first. And then, according to Muslim law, I’m only talking about governments … to defend their population or their borders. My faith is a completely a nonviolent faith. I don’t support the use of IEDs or of warfare by shadow fighters who are not part of a government. As an American, I have a huge problem with anyone choosing to take up arms against our country. At the same time, I’m critical of our government. The way we use drones casts an ugly glow over our foreign policy. It doesn’t make things better or foster togetherness.” – Muslim woman in her 40s

This new, more general question about violence against civilians was designed to be asked of all U.S. adults, to help put findings about Muslims into context. In previous surveys of Muslim Americans, Pew Research Center asked Muslims whether targeting and killing civilians could be justified in defense of Islam, which made comparisons with non-Muslims impossible.

The new question finds that among the general public, Americans with a high school degree or less education are somewhat more likely than those with more education to say there are circumstances in which violence against civilians can be justified. In addition, Republicans and those who lean toward the GOP are more likely than Democrats to say such tactics are sometimes or often justifiable.

To better understand what respondents in the general public were thinking about when they answered this question, Pew Research Center writers and editors called back some of the survey respondents who said targeting and killing civilians for political, social or religious reasons can at least sometimes be justified. Some of them said civilian casualties that are a byproduct of war can be justified. One man in his 50s, for example, said: “It’s just like [World War II] – sometimes killing civilians is part of the cost of war. We hope it will never be necessary, but if we have to do it, we’ll do it.”

Although the survey question was intended to probe the morality of targeting innocent people to advance a cause – as suicide bombers and other terrorists often do – some respondents may have interpreted it more broadly. For instance, one man in his 80s said that violence against civilians is acceptable “just in self-defense.” And another man in his 50s said: “If I’m walking along and I’m peaceful, and somebody wants to hurt me or my family because of their political, religious, social views, by all means I think … our law enforcement has every right to put them down.” 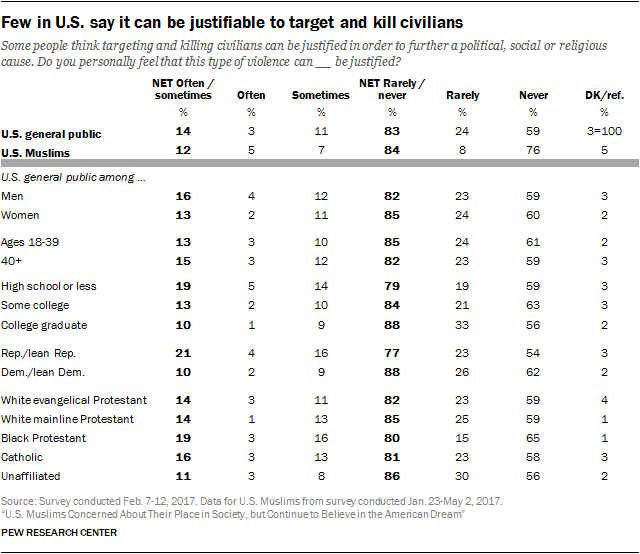 Next: 6. Religious beliefs and practices
← Prev Page
Page1Page2Page3Page4Page5You are reading page6Page7Page8Page9Page10Page11
Next Page →

Documentary: Being Muslim in the U.S.

U.S. Muslims Concerned About Their Place in Society, but Continue to Believe in the American Dream 1. Demographic portrait of Muslim Americans 2. Identity, assimilation and community 3. The Muslim American experience in the Trump era 4. Political and social views
5. Terrorism and concerns about extremism
Concerns grow over extremism in the name of IslamMuslims see little support for extremism in the Muslim American communityConcerns about entrapment of Muslims as part of anti-terror effortsMuslim Americans even more likely than general public to say targeting and killing civilians is never justified
6. Religious beliefs and practices 7. How the U.S. general public views Muslims and Islam Acknowledgements Appendix A: Glossary Appendix B: Survey methodology