The survey is based on samples of noninstitutionalized adults ages 18 and older. In some instances, samples exclude minor segments of the population due to accessibility problems, security concerns, very low population figures in rural areas or costs. An oversample was conducted in several countries to boost the sample size for some smaller subgroups. Oversamples were conducted in Estonia and Latvia among Orthodox Christians, in Russia among Muslims, in Ukraine in four oblasts (administrative divisions) and in Moldova in the Gagauzia region.

In all countries, the surveys were administered face to face at the respondent’s residence. All samples are based on multistage cluster designs, which typically entailed proportional stratification by region and locality size or urbanity, selection of primary sampling units (PSUs) proportional to population size, and random selection of secondary and tertiary sampling points within PSUs. Interview teams were assigned to designated random routes at the block or street level and followed predetermined skip patterns when contacting households. Within households, interviewers randomly selected a respondent by using a Kish grid (a random selection from a detailed list of all household members) or by selecting the adult with the next or most recent birthday.

Because of the sensitive political environment in some countries, certain areas were excluded at the sampling design stage. Those regions are: Abkhazia and South Ossetia in Georgia, as well as Crimea, Donetsk and Luhansk in Ukraine.

The questionnaire administered by survey interviewers was designed by Pew Research Center staff in consultation with subject matter experts and advisers to the project. The questionnaire was translated into 16 different languages, with some countries using two languages for larger subpopulations. The list of translations used for fieldwork in each country can be found in the table. Once the translations were received, they were independently verified by professional linguists and pretested prior to fieldwork.

Following fieldwork, survey performance for each country was assessed by comparing the results for key demographic variables with reliable, national-level population statistics. For each country, the data were weighted to account for different probabilities of selection among respondents. Where appropriate, data also were weighted through an iterative procedure to more closely align the samples with official population figures for gender, age, education, urbanity and region. Weighting in Poland took into account the size of locality; weighting in Russia took into account religion. The reported sampling errors and the statistical tests of significance used in the analysis take into account the effects of weighting and specific sample designs.

The table below shows the total, unweighted sample size and associated margin of sampling error for each country. For results based on the total sample in the countries surveyed, one can say with 95% confidence that the error attributable to collecting data from some, rather than all, adults living in a country is plus or minus the margin of error. This means that in 95 out of 100 samples of the same size and type, the results obtained would vary by no more than plus or minus the margin of error for the country in question.

It should be noted that practical difficulties in conducting multinational surveys can introduce potential error or bias into the findings. Question wording, in addition to sampling error, can also have an impact on the findings of opinion polls. 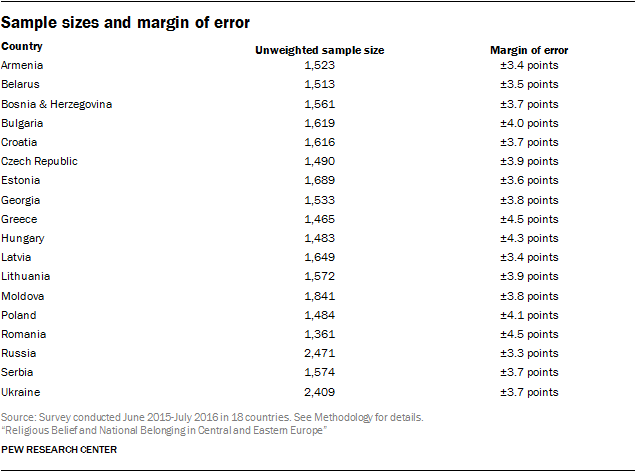 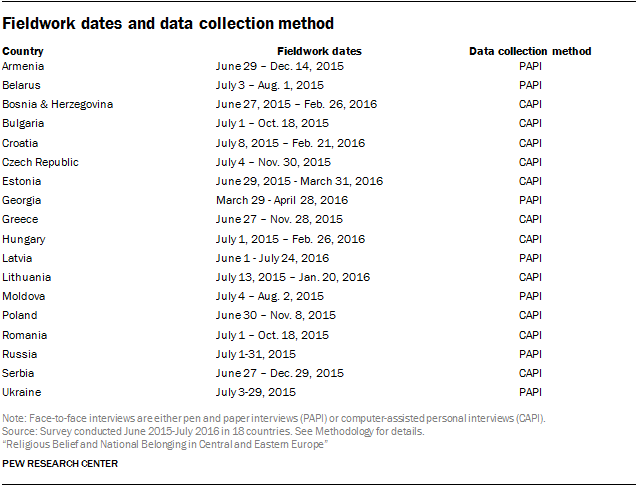 Religious Belief and National Belonging in Central and Eastern Europe 1. Religious affiliation 2. Religious commitment and practices 3. Religious beliefs 4. Views on religion and politics 5. Social views and morality 6. Science and religion 7. Views on role of Russia in the region, and the Soviet Union 8. Democracy, nationalism and pluralism 9. Views on economic issues Acknowledgments
Appendix A: Methodology