Amid widespread economic dissatisfaction, people across Central and Eastern Europe generally expect their governments to provide a safety net for the needs of the poor.

Most adults throughout the region say their country’s current economic situation is “very” or “somewhat” bad, and similar shares say they are generally unhappy with the state of affairs in their country. Many cite unemployment and the gap between the rich and the poor as pressing national concerns.

Overwhelming majorities across every country surveyed say the government should provide for the poor. At the same time, however, majorities in most of the 18 countries surveyed – all of which had communist or socialist governments at some point during the 20th century – say most people are better off in a free-market economy.

Despite widely perceived economic woes in the region, the prevailing opinion in all of the countries surveyed is that people should protect the environment for future generations, even at the expense of economic growth. 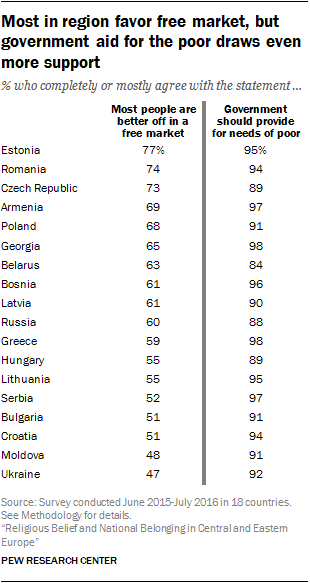 Near universal support for government aid for the poor

While nearly all of the countries surveyed were either part of the communist Soviet Union or in the USSR’s sphere of influence just a few decades ago, majorities across most of the region say most people are better off in a free-market economic system, even though some people are rich and others are poor. This is the view of six-in-ten adults in Russia and roughly three-quarters in Estonia (77%) and Romania (74%).

In a few countries, such as Moldova and Ukraine, only about half of respondents or fewer say most people are better off in a free market.

While free markets are clearly the preferred economic system across the region, overwhelming majorities also say governments should take care of very poor people who can’t take care of themselves. More than eight-in-ten in every country surveyed, including near unanimous shares in Georgia, Greece, Serbia and Armenia say this.

In nearly all countries surveyed, majorities describe their country’s economic situation as either “very” bad or “somewhat” bad. Ukrainians and Greeks nearly universally give their economies a bad rating (96% and 95%, respectively).43

In just one country surveyed – the Czech Republic – do somewhat more people describe their country’s economy as good (53%) than bad (46%). 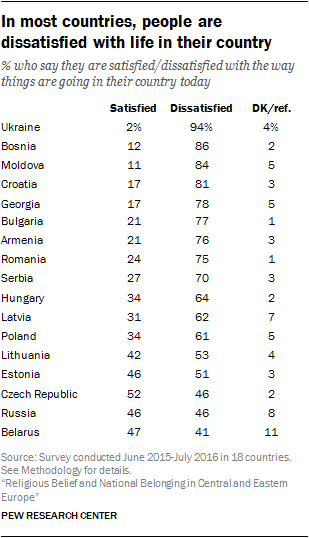 This economic gloom is accompanied by widespread dissatisfaction with the general state of affairs in the countries surveyed. Across most of the region, majorities say they are dissatisfied with the way things are going in their country today – including 94% who say this in Ukraine.

Russians, on the other hand, are divided on this question: 46% say they are satisfied with the way things are going in Russia, while an identical share are dissatisfied.

Most oppose harming environment to use natural resources for economic growth 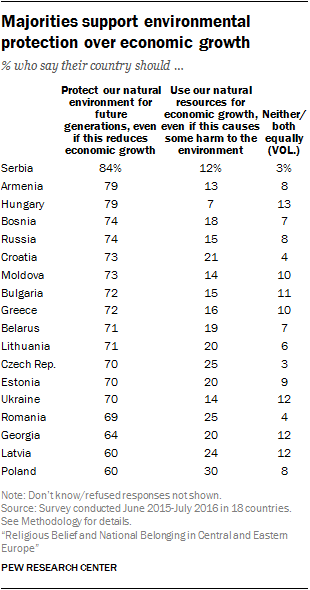 Nonetheless, majorities of adults in all 18 countries surveyed say the natural environment should be protected for future generations, even if doing so comes at the expense of economic growth. Support for environmental protections ranges from 60% in Latvia and Poland to 84% in Serbia.

Across the region, majorities express concern about economic issues

Consistent with their views on the economy, majorities in most countries rate economic issues as the most pressing concerns facing their nation. The survey asked respondents whether six potential issues pose “a very big problem,” “a moderately big problem,” “a small problem” or “not a problem at all;” the two issues most likely to be called “a very big problem” are economic issues – unemployment and the gap in wealth between the rich and the poor.

Overall, substantial majorities across most countries surveyed view unemployment as a very big problem, including roughly nine-in-ten or more respondents in Armenia (93%), Georgia (93%), Bosnia (92%), Greece (92%), Serbia (91%) and Croatia (90%). These countries also have some of the region’s highest unemployment rates.

In most countries surveyed, at least half say the gap between the rich and poor is a very big problem in their country. This concern is especially acute in the former Yugoslav nations of Bosnia (77%) and Croatia (66%). By contrast, fewer than half in Russia (46%) and only about a quarter in Estonia (27%) and Belarus (24%) say the gap in wealth is a very big problem.

While majorities across the region side with protecting the environment over using natural resources for economic growth, fewer people see pollution of the natural environment as a major problem in their country.

Majorities in a few countries say a decline of moral values in society is a very big problem in their nations, with Bosnians (67%) and Serbs (67%) expressing the most concern over this. People ages 35 and older generally are more likely than younger adults to say this. In Greece, for example, 50% of those ages 35 and older say declining moral values is a very big problem in their country, compared with 36% of those ages 18 to 34.

No more than a third of Belarusians see any of these issues as very big problems in their country. Belarus is also among the only countries in the region where more people say they are satisfied with the way things are going (47%) than say they are dissatisfied (41%). 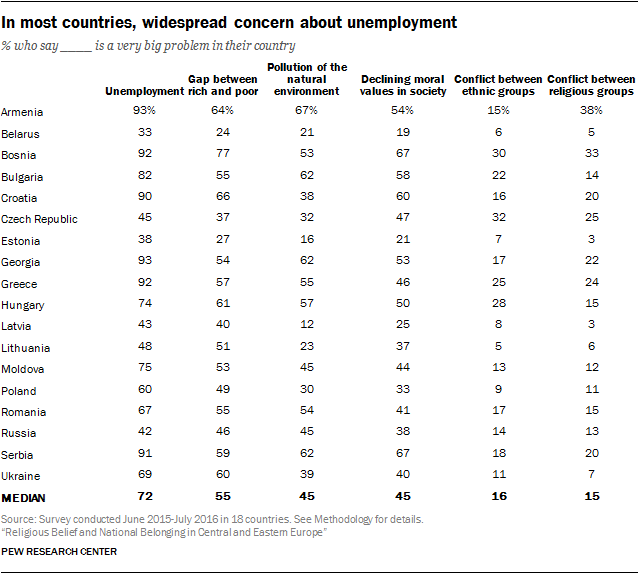 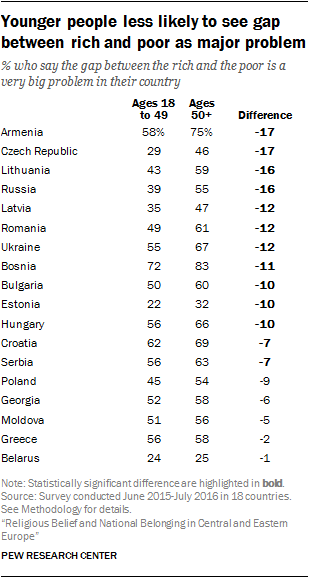 This pattern is linked with another one: Across several nations (Armenia, Belarus, Georgia, Latvia, Russia and Ukraine), younger adults hold more favorable views of free-market economies than do their elders.

Next: Acknowledgments
← Prev Page
Page2Page3Page4Page5Page6Page7Page8Page9You are reading page10Page11Page12
Next Page →

Religious Belief and National Belonging in Central and Eastern Europe 1. Religious affiliation 2. Religious commitment and practices 3. Religious beliefs 4. Views on religion and politics 5. Social views and morality 6. Science and religion 7. Views on role of Russia in the region, and the Soviet Union 8. Democracy, nationalism and pluralism
9. Views on economic issues
Near universal support for government aid for the poorWidespread gloom about economy and country’s directionMost oppose harming environment to use natural resources for economic growth
Acknowledgments Appendix A: Methodology