Of the 198 countries included in the study, 24% had high or very high levels of government restrictions in 2014 (the most recent year for which data are available), down from 28% in 2013.2 There was a similar decline in the share of countries with high or very high social hostilities involving religion, which dropped from 27% to 23%. This is the second year in a row the number of countries with this level of religious restrictions has declined, after three years of steady increases.3

Although only about a quarter of the countries included in the study fall into the most religiously restrictive categories, some of the most restrictive countries (such as Indonesia and Pakistan) are very populous. As a result, roughly three-quarters of the world’s 7.2 billion people (74%) were living in countries with high or very high restrictions or hostilities in 2014, down slightly from 77% in 2013.

Several factors contributed to the overall decline in government restrictions on religion. For instance, there was a decrease in the number of countries where some level of the government – national, provincial or local – interfered with worship practices. There also was a sizable drop in the number of countries where governments used force against religious groups that resulted in individuals being killed, physically abused, imprisoned, detained or displaced from their homes.

Looking at the overall level of restrictions in 2014 – whether resulting from government policies and actions or from hostile acts by private individuals, organizations or social groups – the new study finds that restrictions were high or very high in 34% of countries, down from 39% in 2013 and 43% in 2012.

This is the seventh in a series of reports by the Center analyzing the extent to which governments and societies around the world impinge on religious beliefs and practices. The studies are part of the Pew-Templeton Global Religious Futures project, which analyzes religious change and its impact on societies around the world. The project is jointly funded by The Pew Charitable Trusts and the John Templeton Foundation.

To track these indicators of government restrictions and social hostilities, researchers comb through more than a dozen publicly available, widely cited sources of information, including the U.S. State Department’s annual reports on international religious freedom and annual reports from the U.S. Commission on International Religious Freedom, as well as reports from a variety of European and U.N. bodies and several independent, nongovernmental organizations. (See Methodology for more details on the sources used in the study.) 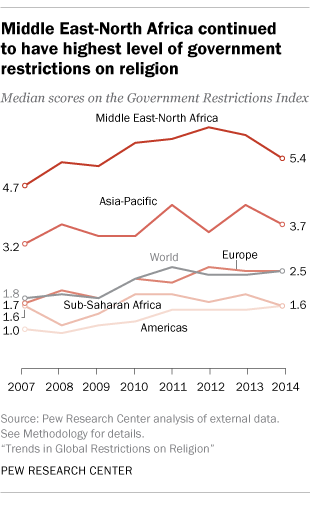 The new study looks at the prevalence of restrictions and hostilities by region and by country. The Middle East and North Africa region continued to have the highest median level of government restrictions on religion, although the region’s score on the GRI dropped slightly from 2013 to 2014. Median scores on the Government Restrictions Index also decreased modestly in Asia and the Pacific and in sub-Saharan Africa; scores stayed about the same in the Americas and Europe. 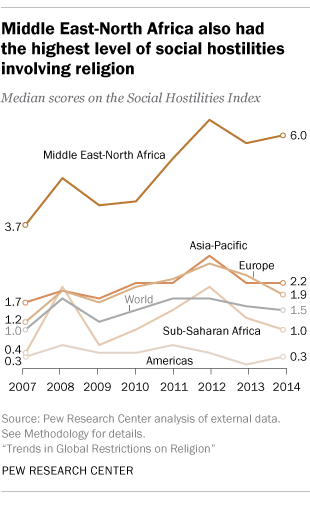 Among the world’s 25 most populous countries, the highest overall restrictions on religion were in Egypt, Indonesia, Pakistan, Russia and Turkey, where both the government and society at large imposed numerous limits on religious beliefs and practices. China had the highest level of government restrictions in 2014, while Pakistan had the highest level of social hostilities involving religion. (See Chapter 4 for more details.)

As in previous years, Christians and Muslims – who together make up more than half of the global population – faced harassment in the largest number of countries. The study also finds that harassment of Jews continued to increase in 2014. (See Chapter 2 for more details on harassment of specific religious groups.)

For the purposes of this study, religion-related terrorism includes acts carried out by subnational groups that use religion as a justification or motivation for their actions, such as the Nigeria-based Islamist group Boko Haram; al-Qaida in the Islamic Maghreb (AQIM); and the Islamic State, the militant group also known as ISIS or ISIL. Religion-related terrorism also includes terrorist acts carried out by individuals or groups with a nonreligious identity that deliberately target religious groups or individuals, such as clergy. (See Methodology for more details.) 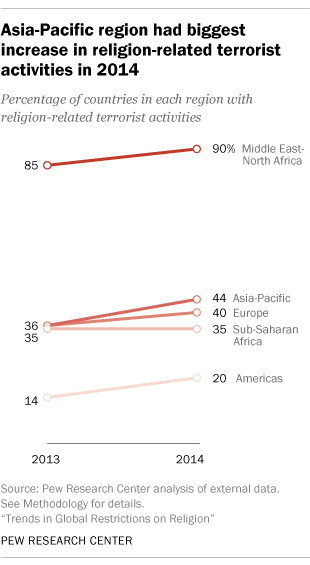 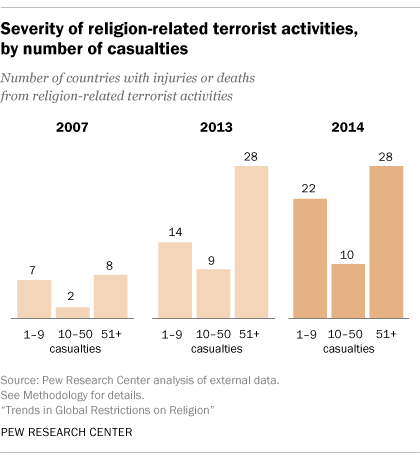 While the number of countries with more than 50 casualties remained the same from 2013 to 2014, it has risen dramatically in recent years. In 2007, the first year for which Pew Research Center has data, only eight countries had this level of casualties. In 2014, 28 did. Readers should note that some of the increase in casualties from religion-related terrorism, especially from 2007 to 2009, could reflect the use of new sources that provide greater detail on terrorist activities than the sources used in the early years of the study. (See Methodology for more details.) Nevertheless, the number of countries experiencing more than 50 casualties as a result of religion-related terrorism was significantly higher in 2014 than it was in earlier years.

For the first time, several of the incidents of religion-related terrorism captured by the study involved actions reportedly inspired by the Islamic State in regions outside the Middle East and North Africa (or in the nearby country of Turkey).6 In October 2014, for example, a man stormed the Canadian Parliament after shooting and killing a soldier who was guarding Canada’s National War Memorial. According to Ottawa police, the man was planning to travel to Syria after undergoing a “radicalization process.”7 The gunman was shot and killed inside the Parliament building. A few days earlier, a different man – described by Canadian authorities as “an ISIL-inspired terrorist” – struck and killed a Canadian soldier with his car in Quebec.8

On Dec. 15, 2014, an Iranian-born Muslim living in Australia took 18 people hostage in a cafe in Sydney; two of the hostages were killed and several others were wounded when police stormed the cafe nearly 17 hours later. The man had had numerous run-ins with the police and immigration officials, but he was not known to have any direct ties to the Islamic State. 9 However, he pledged allegiance to the “caliph of the Muslims” on his website days before the attack; he displayed a flag similar to the one used by the Islamic State from the cafe window during the siege; and he was posthumously embraced by the Islamic State in its English-language propaganda magazine, Dabiq. 10

Religion-related terrorism by the Nigerian-based Islamist group Boko Haram also intensified in 2014. This included the April 2014 kidnapping of more than 200 schoolgirls from the Government Girls Secondary School in the largely Christian town of Chibok, located in Nigeria’s northern state of Borno.11 The kidnapping captured media attention around the world and sparked a global social media campaign under the hashtag #BringBackOurGirls; the campaign was supported by U.S. first lady Michelle Obama and many other celebrities.12

Next: 1. Number of countries with very high restrictions and hostilities went down in 2014
← Prev Page
You are reading page1Page2Page3Page4Page5Page6Page7Page8
Next Page →

Trends in Global Restrictions on Religion
Rise in religion-related terrorist activity
1. Number of countries with very high restrictions and hostilities went down in 2014 2. Harassment of specific religious groups: Christians and Muslims were harassed in the most countries in 2014 3. Middle East-North Africa was region with highest restrictions and hostilities in 2014 4. Among the world’s 25 most populous countries, the highest overall restrictions on religion in 2014 were in Egypt, Indonesia, Pakistan, Russia and Turkey About this report Acknowledgments Methodology