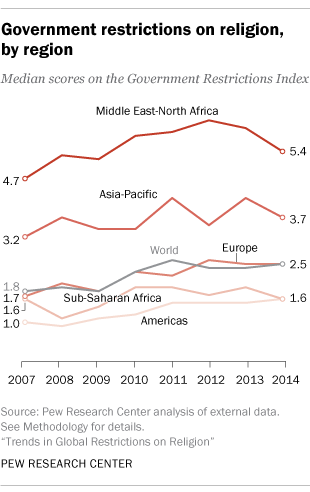 The median level of government restrictions on religion decreased in three of the five regions (Asia and the Pacific, the Middle East and North Africa, and sub-Saharan Africa) and stayed roughly the same in two regions (the Americas and Europe).

In the latest year studied, the Middle East and North Africa continued to have the highest median level of government restrictions. The median score on the Government Restrictions Index for the 20 countries in the region decreased modestly, from 6.0 in 2013 to 5.4 in 2014, but it remained much higher than the global median (2.5). Many government restrictions that were present in the region in 2013 continued to occur in 2014. For example, government limits on public preaching were reported in 16 of the region’s 20 countries, about the same as in 2013 (17 countries). Similarly, government interference with worship practices occurred in 18 of the 20 countries, compared with 19 in 2013.

In the Asia-Pacific region, the median score on the GRI decreased from 4.2 in 2013 to 3.7 in 2014. Government harassment of religious groups was reported in 33 of the region’s 50 countries, down from 36 in 2013. In the Philippines, for instance, the government signed a peace accord with a militant separatist group known as the Moro Islamic Liberation Front. Violent conflicts between the Christian-dominated government and Muslim separatist groups in the southern part of the island nation have claimed more than 100,000 lives in recent decades. The peace agreement created an autonomous Muslim-dominated area in the southern island of Mindanao.29

Sub-Saharan Africa’s median GRI score declined from 1.9 in 2013 to 1.6 in 2014, below the global median. Among the factors contributing to the decline were a decrease in government interference with religious worship practices and declines in deaths, physical abuse, detentions, displacements and property damage resulting from government actions. 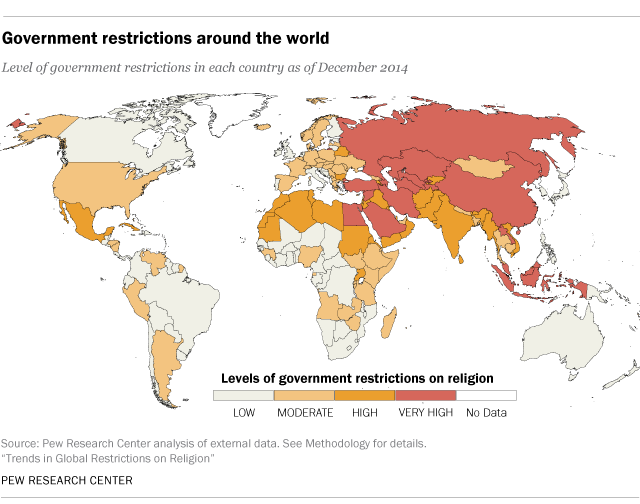 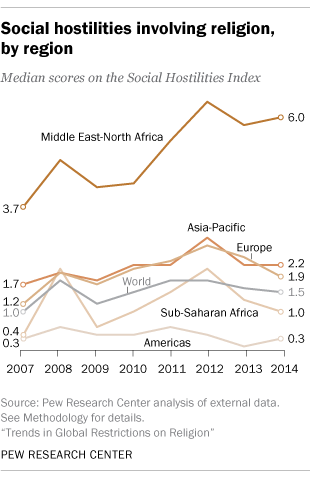 The median level of social hostilities involving religion decreased somewhat in two of the five regions in 2014 (Europe and sub-Saharan Africa) and stayed roughly the same in three (the Americas, Asia and the Pacific, and the Middle East and North Africa).

As in previous years, social hostilities involving religion remained the highest in the Middle East and North Africa. The median score for the region’s 20 countries stayed roughly the same (6.0 in 2014 vs. 5.8 in 2013), but it was well above the global median (1.5). Religious hostilities decreased in seven countries in the region and increased in 10.

Iraq was one of the 10 countries in the region where social hostilities increased. Violent acts by both Sunni- and Shia-dominated groups and militias – including the Islamic State in Iraq and the Levant (ISIL) – led to killings, suicide bombings, kidnappings, robberies, harassment, intimidation and the displacement of people from their homes.30

Sub-Saharan Africa’s median SHI score fell from 1.3 in 2013 to 1.0 in 2014, continuing a trend from 2012-2013. For instance, the number of countries in the region where individuals or social groups used violence or the threat of violence to enforce religious norms dropped from 15 in 2013 to nine in 2014. And the number of countries where individuals were assaulted or displaced from their homes for religious activities considered offensive to the majority faith dropped from 18 to nine.

In the Asia-Pacific region, the median SHI score stayed at 2.2. While the region’s overall score remained unchanged, there was a sizable decrease in the number of countries where women were harassed for violating religious dress norms (from 16 in 2013 to 11 in 2014). At the same time, the number of countries in the region with active terrorist groups increased from 18 to 22. In Australia, for instance, an Iranian-born Muslim, Man Haron Monis, took 18 people hostage in a Lindt Chocolate Cafe in Sydney in December 2014. The siege ended when police stormed the building, resulting in the deaths of two hostages.32 (See the Overview of this report for more details.)

The median level of social hostilities involving religion in the Americas remained low (0.3 in 2014 compared with 0.1 in 2013). 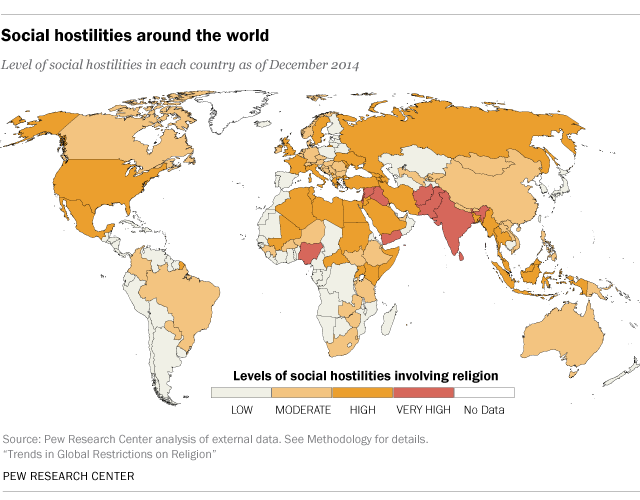 Next: 4. Among the world’s 25 most populous countries, the highest overall restrictions on religion in 2014 were in Egypt, Indonesia, Pakistan, Russia and Turkey
← Prev Page
Page1Page2Page3You are reading page4Page5Page6Page7Page8
Next Page →