President Obama’s statement on May 9 that “same-sex couples should be able to get married” garnered significant public and media attention. Reports about Obama’sendorsement of gay marriage accounted for 14% of major news organizations’ coverage over the course of that week, equal to the amount of coverage given to the election contest and nearly double the amount of coverage of the nation’s economy, according to an analysis by the Project for Excellence in Journalism. 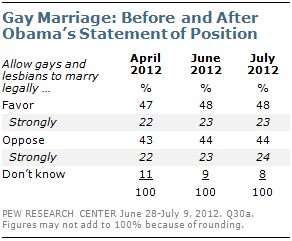 A Pew Research Center survey conducted May 10-May 13 found that a quarter of Americans (26%) said they followed the news about Obama’s statement more closely than any other news event that week.

Yet two consecutive Pew Research Center surveys conducted in the wake of Obama’s announcement show that it had no significant effect on the balance of public opinion on the issue. Both surveys, conducted in June and July, found 48% in favor of allowing gays and lesbians to marry legally, and 44% opposed. That is largely unchanged from a 47% to 43% balance of opinion in April of this year. 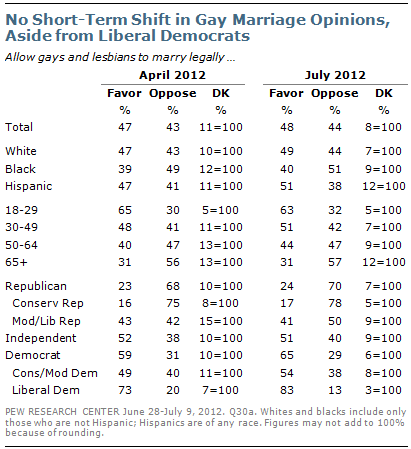 This stability over the course of the year exists across most key demographic groups: There is virtually no change in attitudes toward gay marriage across age, race and ethnic groups. Among political groups, support for gay marriage among liberal Democrats has increased by ten points since April. But opinions among conservative and moderate Democrats have changed less – 54% favor gay marriage in June/July polling; 49% did so in April. Conservative Republicans’ views also are largely unchanged: 75% opposed gay marriage before Obama’s announcement, 78% oppose it currently.

There is also little evidence that views of Obama have changed as a result of his support for gay marriage. A Pew Research Center survey conducted immediately after Obama’s announcement (May 10-13) found roughly half (52%) saying his support for gay marriage did not affect their opinion of him. A quarter (25%) said they felt less favorably toward Obama while 19% said they felt more favorably. Obama’s overall approval ratings have remained relatively stable over this period.

Gay marriage remains a relatively low-priority issue for most voters. In the current survey, only one-in-twenty Americans (4%) say that gay marriage is the issue that matters most to them in deciding their vote for president this year.