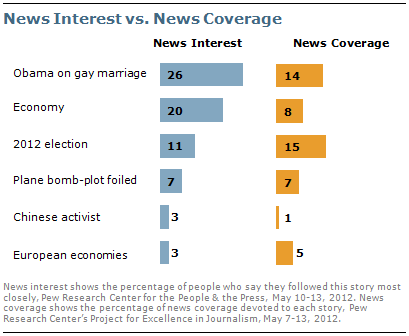 About a quarter of Americans (26%) say they followed news about Obama’s statements on the divisive topic more closely than any other news, according to the latest weekly News Interest Index survey, conducted May 10-13 among 1,003 adults by the Pew Research Center for the People & the Press. Still, in the same survey, about half (52%) say Obama’s expression of support for same-sex marriage did not affect their opinion of the president. A quarter (25%) say Obama’s comments made them think less favorably of him, while 19% say the comments made them think more favorably of the president. (See: “Half Say View of Obama Not Affected by Gay Marriage Decision”.)

Obama’s comments – and their possible impact on the presidential race – also were among the week’s most covered stories, according to a separate analysis by the Pew Research Center’s Project for Excellence in Journalism (PEJ). News specifically about Obama and his expression of support for gay marriage accounted for 14% of coverage. More general news about the 2012 election accounted for 15%, separating out news that focused primarily on Obama’s gay marriage comments. Altogether, campaign news accounted for 24% of coverage, according to PEJ.

Differences in Interest in Obama’s Comments on Gay Marriage 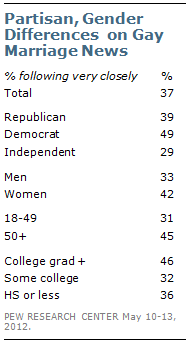 More than a third of the public (37%) says they followed news about Obama’s expression of support for gay marriage very closely. About half of Democrats say this (49%), compared with 39% of Republicans and 29% of independents.

As is typically the case, older people are more likely to say they followed this news very closely; 45% of those 50 and older say this, compared with 31% of those 18-49.

Relatively few are closely following news about the economic problems unfolding in several European countries. Just 17% say they followed this news very closely; 3% say this was their top story. News about European economic woes accounted for 5% of coverage, according to PEJ.

About a third (34%) say they very closely followed news about the candidates for president in 2012, while 11% say this was the news they followed most closely. With the contest now a head-to-head race between Obama and Mitt Romney, Republicans and Democrats are about equally likely to say they are following this news very closely (39% of Republicans, 40% of Democrats). Fewer independents say this (27%).

About a quarter of the public (24%) say they followed news about the undercover agent in Yemen who foiled a plot to blow up a U.S.-bound airplane; 7% say this was the news they followed most closely. News about the failed plot accounted for 7% of coverage. 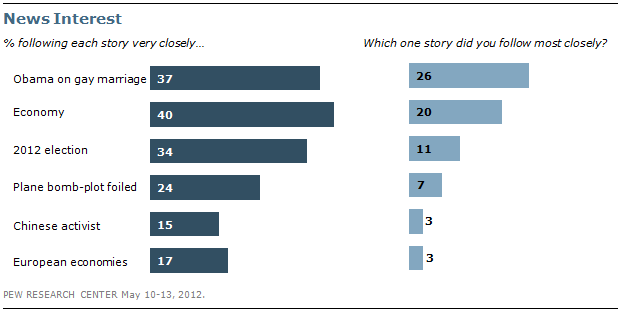 And news about negotiations between U.S. and Chinese officials over the fate of a Chinese human rights activist continued to attract modest attention; 15% say they followed this news very closely, the same level of interest as one week earlier. Meanwhile, 3% say this was the news they followed most closely. Last week, news about Chen Guangcheng’s situation accounted for 1% of coverage. The week before that, the story had ranked near the top of PEJ’s list, accounting for 12% of coverage.

These findings are based on the most recent installment of the weekly News Interest Index, an ongoing project of the Pew Research Center for the People & the Press. The index, building on the Center’s longstanding research into public attentiveness to major news stories, examines news interest as it relates to the news media’s coverage. The weekly survey is conducted in conjunction with The Project for Excellence in Journalism’s News Coverage Index, which monitors the news reported by major newspaper, television, radio and online news outlets on an ongoing basis. In the most recent week, data relating to news coverage were collected May 7-13, 2012, and survey data measuring public interest in the top news stories of the week were collected May 10-13, 2012, from a nationally representative sample of 1,003 adults.