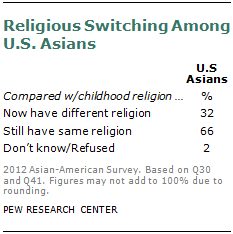 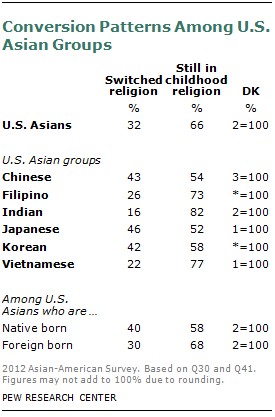 Overall, Buddhism had the greatest net loss due to changes in religious affiliation within the Asian-American community. One-in-ten Asian Americans (10%) were raised Buddhist and have left the faith, while 2% of Asian Americans have become Buddhist after being raised in a different faith (or no faith), resulting in a net loss of eight percentage points due to religious switching. 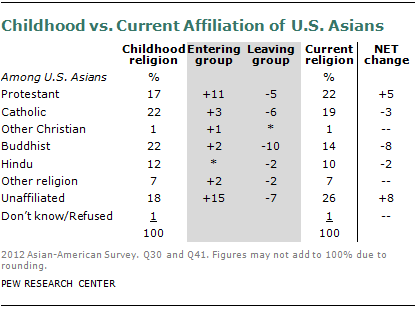 Mirroring a pattern seen in the general public, there are substantial gains due to religious switching among Asian Americans who say they are not affiliated with any particular religion. Less than a fifth of Asian Americans (18%) say they were raised without a particular faith, but today about a quarter (26%) say they are religiously unaffiliated, a net gain of eight percentage points.

There has also been a net gain among Protestants. Less than a fifth of Asian Americans (17%) say they were raised Protestant, but 22% now describe themselves as Protestant, a net gain of five percentage points.

By contrast, Buddhists— a group that has seen net losses because of religious switching—are composed largely of people who were raised in the faith. Fully 85% of Asian-American Buddhists were raised as Buddhists. A similar pattern is seen among the groups that have been largely stable, Catholics and Hindus. 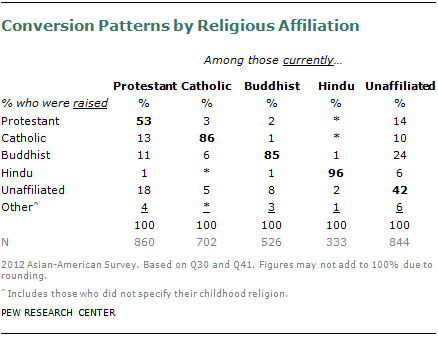 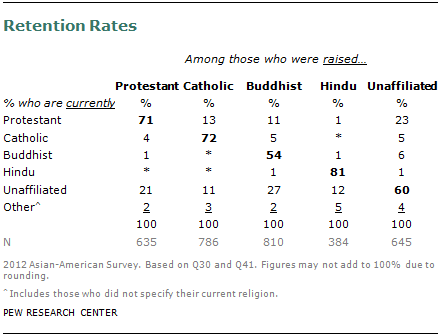 Roughly seven-in-ten Asian Americans who were raised Catholic (72%) or Protestant (71%) still practice their childhood religion. Those who have left Catholicism are divided roughly evenly between those who say they are now Protestant (13%) and those who say they are now religiously unaffiliated (11%). Among those who were raised Protestant, 21% now describe themselves as religiously unaffiliated, while smaller numbers say they belong to other faiths.

Among Asian Americans who were religiously unaffiliated as children, 60% are unaffiliated today, while 40% are now affiliated with a religion or did not specify a current religion. Nearly a quarter are Protestant (23%), while 6% are Buddhist, 5% are Catholic, and 1% are Hindu. 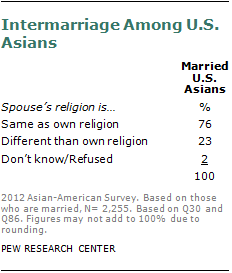 Married Asian Americans who are Hindu are most likely to be married to someone from their own faith; fully 94% of married Hindus are married to other Hindus. Roughly eight-in-ten married Protestants and Catholics in the Asian-American community have a spouse with the same religion (81% for both groups). 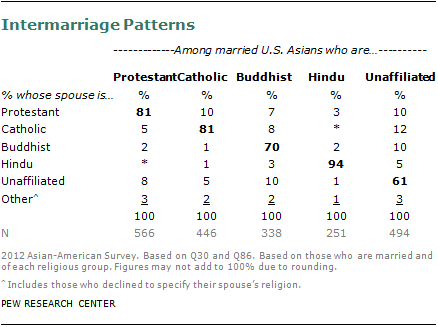 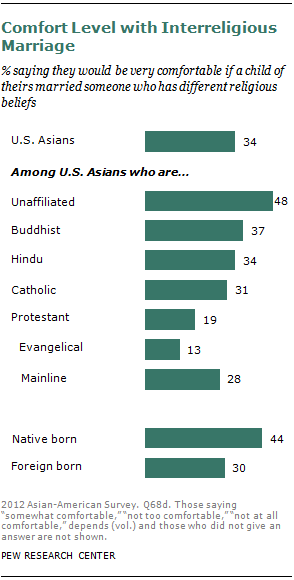 In addition, native-born Asian Americans are more likely than those who are foreign born to be very comfortable with marriage across religious lines.

Asian Americans are less accepting of religious intermarriage than they are of interracial or interethnic marriage. About half of Asian Americans say they would be “very comfortable” if their child married someone from another country of origin, including those with no Asian background. Asian-American Protestants, Catholics and the unaffiliated are especially likely to express more comfort with interracial marriage than they do with interfaith marriage.

A direct comparison with the general public is not available on these questions. 32 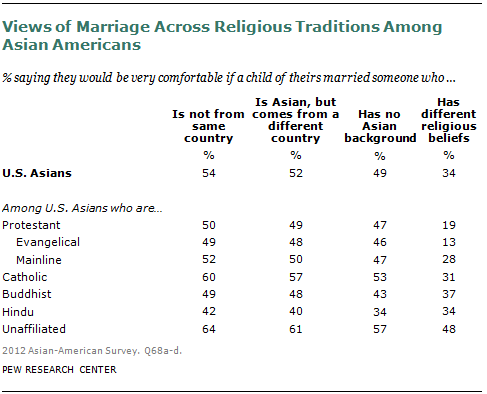 30 The figures for switching are not directly comparable between the two surveys because they used slightly different approaches to categorizing religious affiliation. (return to text)

31 The figures for interfaith marriage are not directly comparable between the two surveys because they used slightly different approaches to categorizing religious affiliation. (return to text)

32 For more information on intermarriage, including a discussion of similar, but not directly comparable, questions on interracial and interethnic marriage among the general public, see Pew Research Center’s Social and Demographic Trends project. 2011. “The Rise of Asian Americans.” Washington, D.C.: June. (return to text)

Next: Chapter 3: Importance of Religion
← Prev Page
Page3You are reading page4Page5Page6Page7Page8Page9Page10Page11Page12Page13
Next Page →