During the three-year period from mid-2006 to mid-2009, national, provincial or local governments harassed or attempted to intimidate religious groups in 142 of the 198 countries or territories included in this study (72%). Harassment of religious groups by individuals or groups in society was even more widespread, occurring in 153 countries (77%). 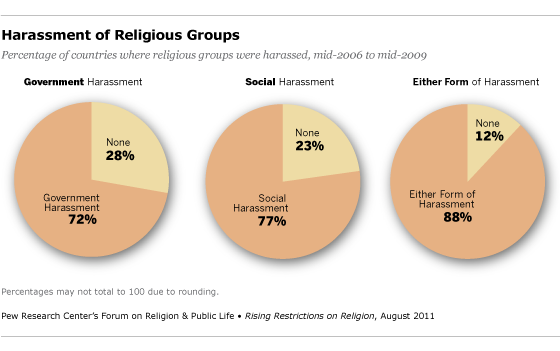 Harassment and intimidation take many forms, including physical assaults, arrests and detentions, the desecration of holy sites and discrimination against religious groups in employment, education or housing. Harassment and intimidation also include such things as verbal assaults on members of one religious group by other groups or individuals in society.24

This section of the report looks at the harassment and attempted intimidation of particular religious groups. It is based on specific, publicly reported acts motivated by religious hatred or bias. It is important to note, however, that these data do not measure the severity of the harassment or intimidation, so it is not possible to say whether one religious group is harassed to a greater or lesser extent than other religious or ethnic minorities.

In proportion to their numbers, some smaller religious groups faced especially widespread hostility. Although Jews comprise less than 1% of the world’s population, government or social harassment of Jews was reported in 75 countries (38%). Members of other world religions – including Sikhs, ancient faiths such as Zoroastrianism, newer faith groups such as Rastafarians and groups that practice tribal or folk religions – were harassed in 84 countries (42%).

Regional Patterns in the Harassment of Religious Groups 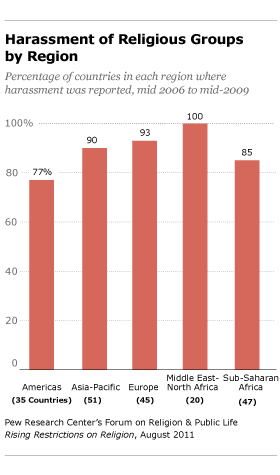 Harassment of Christians, Muslims and Jews was highest in the Middle East-North Africa. Although this is a predominantly Muslim region, followers of Islam were harassed in an even higher percentage of countries in the region than were Jews or Christians. Buddhists and Hindus faced the most harassment in the Asia-Pacific region, the part of the world with the largest concentrations of these two religious groups.

In each region of the world, members of other world religions and groups that practice tribal or folk religions faced harassment in a substantial number of countries. Indeed, these groups were harassed in at least four-in-ten countries in the Asia-Pacific region (49%), the Americas (46%), sub-Saharan Africa (40%) and the Middle East-North Africa (40%). In Europe, such harassment was reported in a third of the countries (36%). In the Americas, followers of Native American faiths and adherents of other world religions were harassed in a larger share of countries (46%) than Christians (37%), Muslims (14%), Jews (31%), Hindus (6%) or Buddhists (3%). 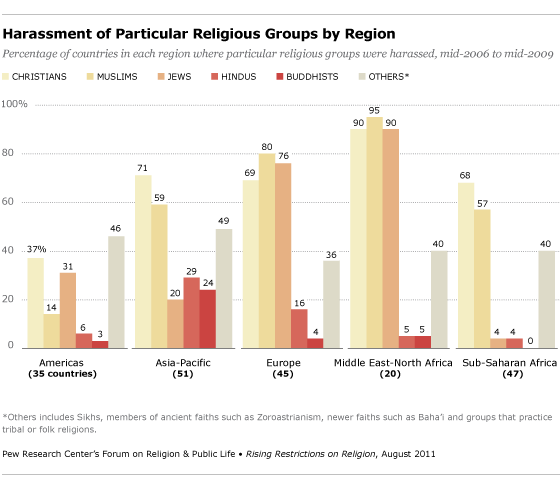 24 This section is drawn from Question 11 on the Government Restrictions Index (“Was there harassment or intimidation of religious groups by any level of government?”) and Question 1 on the Social Hostilities Index (“Were there crimes, malicious acts or violence motivated by religious hatred or bias?”). The latter was a summary question that included several sub-components, including a question specifically asking about harassment and intimidation. (return to text)

25 As of 2010, Muslims made up nearly a quarter (23.4%) of the world’s population, according to the Pew Forum’s January 2011 report The Future of the Global Muslim Population. The Pew Forum is currently compiling population data on other world religions and intends to publish a series of reports on the demography of religion in 2011-2012. In the meantime, the population figures used here are from the World Religion Database at Boston University, which estimates that Christians comprise about a third (32.9%) of the world’s population. (return to text)

Next: Laws Against Blasphemy, Apostasy and Defamation of Religion
← Prev Page
Page3Page4Page5Page6You are reading page7Page8Page9Page10Page11Page12Page13
Next Page →