The Lausanne leaders consider evangelicalism to be at odds with secularism and some other aspects of modern life. Majorities living in both the Global North and the Global South see a natural conflict between being an evangelical and living in modern society. Furthermore, there is widespread agreement among the evangelical leaders that secularism, materialism, and sex and violence in popular culture constitute major threats to evangelicalism today.

A. Conflict between Evangelicalism and Modern Society?

More than six-in-ten of the evangelical leaders surveyed (64%) say there is a natural conflict between being an evangelical Christian and living in a modern society, about twice the portion who say there is no such conflict (33%). This balance of opinion is found consistently across various sub-sets of leaders, including those from the Global South and the Global North, and those from Christian-majority as well as non-Christian-majority countries.

B. Potential Threats to Evangelicalism 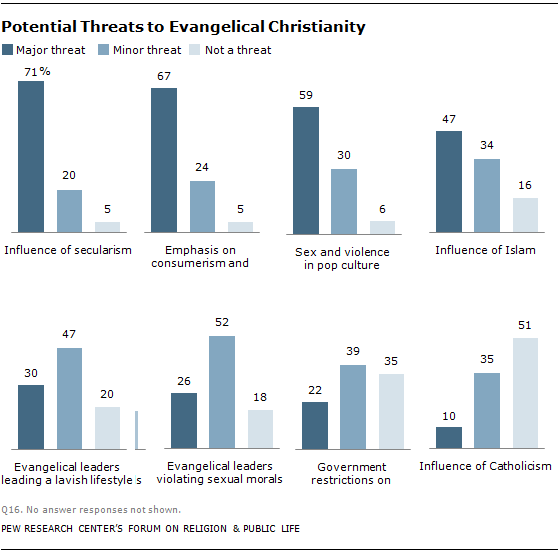 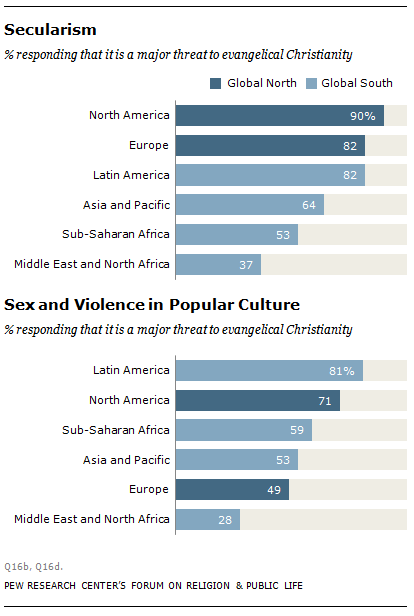 A somewhat different pattern emerges when it comes to the perceived threat from sex and violence in popular culture. Those most likely to consider this a major threat are from Central and South America (81%), followed by North America (71%), sub-Saharan Africa (59%), the Asia-Pacific region (53%) and Europe (49%). In the Middle East and North Africa, only 28% see sex and violence in popular culture as a major threat to evangelical Christianity.

Women leaders are somewhat more likely than men to say consumerism is a major threat to evangelical Christianity in their country (72% vs. 66%) and that sex and violence in popular culture is a major threat (65% vs. 57%). Both groups are about equally likely, however, to consider secularism a major threat (73% among women, 70% among men).

A majority of the evangelical leaders (51%) say the influence of Catholicism is not a threat to evangelical Christianity in their country. Just one-in-ten (10%) call Catholicism a major threat, and 35% say it is a minor threat.