Relations between evangelicals and other religious groups do not appear to be a major concern to most evangelical leaders surveyed. A majority report that conflict between religious groups is either a small problem or not a problem in their country. The Lausanne leaders also report positive relations with a range of Christian groups, including Catholics, Orthodox Christians and Pentecostal Christians. But there are some signs of tension with non-Christian groups, especially Muslims. Jews are the only non-Christian group toward which the leaders express generally favorable views.

A. Seriousness of Inter-religious Conflict 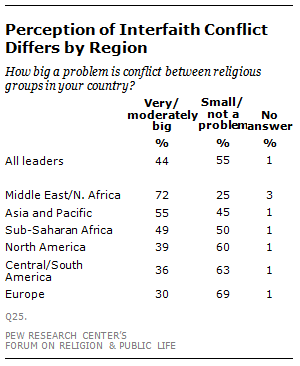 Overall, most of the leaders report that conflict between religious groups is either not a problem (14%) or is a small problem (41%) in their country. However, a substantial minority (44%) view interfaith conflict as a moderately big problem (27%) or a very big problem (17%).

Leaders from the Middle East and North Africa are most likely to say religious conflict is a moderately big or very big problem (72%), followed by those from the Asia-Pacific region (55%) and sub-Saharan Africa (49%). In other regions, a majority considers interfaith conflict a small problem or not a problem at all.

About three-quarters (76%) of leaders from countries that previous Pew Forum research classifies as having high social hostilities involving religion say that conflict between groups is either a very big or moderately big problem.15 By contrast, only about one-in-three leaders (31%) living in countries classified as lower in social hostilities say the same.

One-in-five evangelical leaders surveyed (20%) say that the church or house of worship they most often attend works together with houses of worship from non-Christian faiths, such as Islam, Hinduism or Buddhism, to find solutions to community problems. Churches appear to be especially likely to engage in interfaith outreach in places where religious conflict is more pronounced and where Christians are in the minority.

In countries where social hostilities involving religion are high, 28% say their house of worship engages in interfaith activities to solve community problems, compared with 19% in countries with low social hostilities.16 Three-in-ten leaders from non-Christian-majority countries report that their church engages in interfaith activities to address community problems, while 16% of leaders living in Christian-majority countries report this kind of activity.

In addition, 44% of the leaders report that they personally participate in interfaith religious groups, classes or meetings several times a year or more. About half (52%) say they seldom or never do so. Evangelical leaders from the Middle East and North Africa are among the most likely to say they personally take part in interfaith activities; 62% report doing so several times a year or more.

C. Friendliness of Other Groups toward Evangelicals

Most of the leaders surveyed see other Christians (Pentecostals, Catholics and Orthodox Christians in particular) as either friendly or neutral toward evangelicals. On the other hand, most of the leaders view people of non-Christian faiths (including people who are not religious) as either unfriendly or neutral toward evangelicals.17 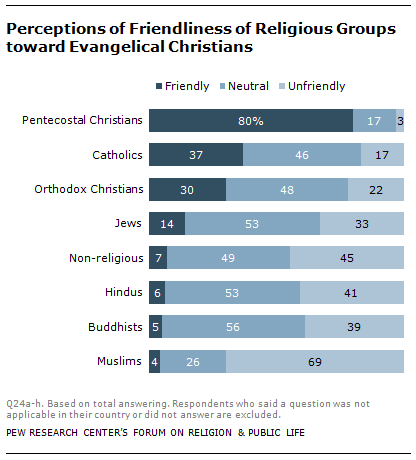 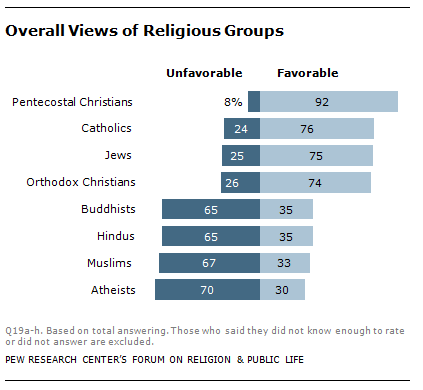 In addition, three-quarters of the leaders (75%) have a mostly or very favorable opinion of Jews. But a majority of Lausanne leaders express generally negative views about all other non-Christian groups listed in this question, including Muslims (67% unfavorable), Hindus (65% unfavorable) and Buddhists (65% unfavorable). Leaders from majority-Muslim countries are more likely than other leaders to hold favorable views of Muslims, although a majority of both groups hold unfavorable views of Muslims. The same pattern holds with respect to opinions of Hindus, with those living in Hindu-majority countries more likely than other leaders to have a favorable opinion of Hindus.

Atheists are also seen in negative terms by a majority of the leaders who express an opinion. Seven-in-ten leaders (70%) report mostly or very unfavorable views of atheists; three-in-ten (30%) express a favorable view of atheists.

Many Lausanne leaders attach special theological significance to Israel and especially to the Jewish people. Nearly three-quarters of the leaders surveyed (73%) endorse the statement that God’s covenant with the Jewish people continues today, while less than a quarter (22%) say it no longer applies. 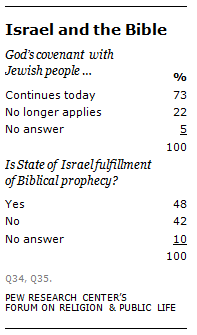 But there are significant regional differences on this question. Leaders from sub-Saharan Africa are especially likely to say that God’s covenant with the Jewish people continues today (81%). Upwards of two-thirds of leaders from Europe, North America, Central and South America, and Asia and the Pacific say the same, including 67% of leaders from the U.S. Leaders from the Middle East and North Africa, on the other hand, are about evenly split, with 48% saying that God’s covenant with the Jewish people no longer applies and 46% saying it continues today. 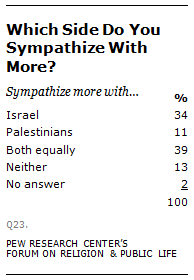 In the Israeli-Palestinian dispute, a plurality of the evangelical leaders (39%) sympathizes equally with both parties. At the same time, of those who express greater sympathy for one side than for the other, more than twice as many lean toward Israel (34%) than lean toward the Palestinians (13%).

While most U.S. evangelical leaders hold a favorable view of Jews overall (82%), they tend to take an even-handed view of the Israeli-Palestinian conflict. About half of the U.S. leaders surveyed (49%) express equal sympathy for both parties. Three-in-ten U.S. evangelical leaders (30%) say they sympathize more with Israel, while 13% sympathize more with the Palestinians.20 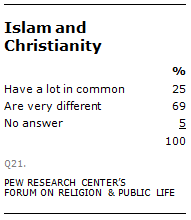 Most of the evangelical leaders view Islam and Christianity as “very different” (69%), while one-in-four (25%) say the two faiths “have a lot in common.” This balance of opinion holds across all regions. 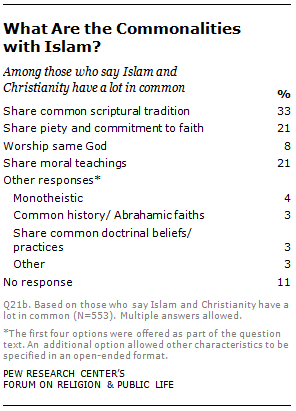 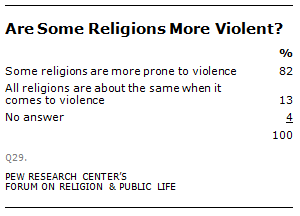 Among the minority who see the two religions as having a lot in common, the most frequently cited reason is that the two faiths share a common scriptural tradition (33%). About a fifth (21%) say that Muslims and Christians share a piety and commitment to their respective faith, and the same proportion says the two faiths share many moral teachings. Less common responses include a belief that Muslims and Christians ultimately worship the same God (8%), that both faiths are mono-theistic (4%), and that the two religions share common historical roots as Abrahamic faiths or common beliefs and practices (3% each).

In an open-ended follow-up question, leaders who said that some religions are more prone to violence were asked to identify which religion or religions they think are particularly prone to violence. Islam is the most common answer (84% of those asked). By comparison, 6% mention Hinduism and 4% mention Christianity; Judaism and Buddhism were each mentioned by 1%.21

This view is reflected across all regions. However, evangelical leaders who live in Hindu-majority countries are especially likely to say that Hinduism is more prone to violence (39% cite Hinduism and 73% mention Islam).

17 Depending on the country where they live, evangelicals can have quite a lot or very little contact with various religious groups. Orthodox Christians, for example, are common in Eastern Europe but relatively rare in Latin America, where Catholics make up a majority of the population. To account for these differences, all of the percentages reported here are based only on those who answered the question, omitting those who declined to answer or indicated the question was not applicable in their country. (return to text)

19 See Pew Research Center, Many Americans Uneasy with Mix of Religion and Politics, 2006. (return to text)

20 Rank-and-file evangelical Protestants in the United States are more likely to say their sympathies lie with Israel (62%), while 10% say they sympathize more with the Palestinians and just 3% volunteered that they sympathize with both equally. However, the question asked of global evangelical leaders offered four response options (including both and neither as explicit options) while the question asked of the general population in the U.S. contained only two explicit response options (sympathize more with Israel or more with the Palestinians), though respondents could volunteer a response of both or neither. Thus, the two questions are not directly comparable. See Pew Research Center for the People & the Press, Pessimistic Public Doubts Effectiveness of Stimulus, TARP, 2010. (return to text)

21 Respondents could name more than one religion. Up to four responses were coded. (return to text)

Next: Priorities and Strategies for Evangelization
← Prev Page
Page1Page2Page3Page4Page5You are reading page6Page7Page8Page9Page10Page11
Next Page →