A statement from the Third Lausanne Congress outlines six key reasons for meeting in Cape Town, and the survey asked leaders to choose which one they personally consider the most urgent.23 The most frequently cited reason is “the brokenness of our world” (35%). As explained by LCWE Executive Chair Doug Birdsall, this phrase refers to the need for Christians to serve as “agents of reconciliation” identifying “with the pain and suffering in the lives of individuals, families, communities and nations.”

About a fifth of leaders say that shifts in global Christianity (21%) and globalization (20%) are the most urgent reasons for holding the Congress. 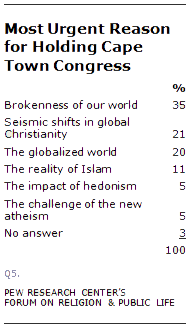 Next: Morality, Society and Politics
← Prev Page
Page1Page2Page3Page4Page5Page6Page7You are reading page8Page9Page10Page11
Next Page →