There is strong consensus among the global evangelical leaders on methods and strategies for evangelization. Eight-in-ten (80%) think the focus of evangelization efforts should be on changing individual hearts, not social institutions. There is also widespread agreement that evangelizing people who are not religious should be a top priority.

A. Frequency of Sharing Faith 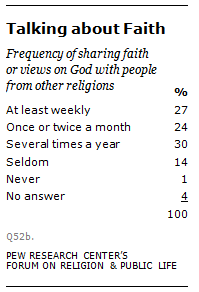 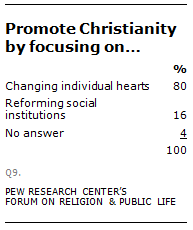 B. Methods of Evangelization 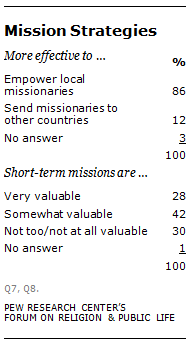 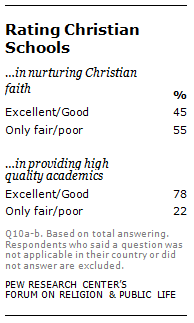 Leaders from the Global North are more positive in their assessment of how well religious schools teach Christianity. A majority of leaders from the Global North (54%) say the schools are excellent or good at nurturing children in the Christian faith; this compares with 39% among Global South leaders. Among U.S. evangelical leaders, 58% say Christian schools are doing an excellent or good job at nurturing children in the faith. 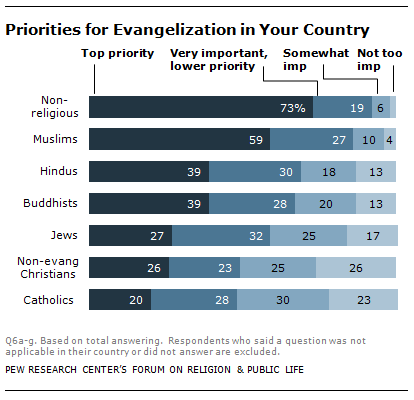 D. Which Is Attracting More Converts – Christianity or Islam? 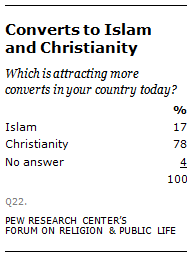 In the eyes of most of the evangelical leaders surveyed, Christianity is making greater strides at attracting converts than Islam. More than three-quarters (78%) say that Christianity is converting more people in their country, compared with 17% who say Islam is making more converts.

22 These items were asked in a fixed order, with “Catholics” listed earlier in the list than “non-evangelical Christians.” (return to text)

Next: Why Cape Town 2010?
← Prev Page
Page1Page2Page3Page4Page5Page6You are reading page7Page8Page9Page10Page11
Next Page →