Who are evangelical Christians? What do they believe? And what do they see as the boundaries of their faith? The survey contains several questions that probe how participants in the Third Lausanne Congress of World Evangelization identify themselves religiously, in what faith they were raised and what spiritual experiences they have had. It finds broad agreement among these Christian leaders on some beliefs and practices that are essential to being “a good evangelical.” Virtually all the leaders surveyed, for example, say evangelicals must follow the teachings of Christ in their personal and family life. But the survey also finds areas of substantial disagreement, including over biblical literalism and the consumption of alcohol. 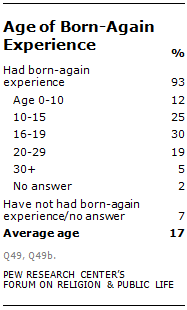 The “born-again” experience is a defining characteristic of the evangelical movement, and one that is reported by nearly all of the leaders surveyed. More than nine-in-ten (93%) say they have been born-again, in most cases at a relatively young age. The average is 17, with nearly all of the leaders (86%) saying they were born-again before the age of 30. Two-thirds (67%) say the experience occurred before they turned 20. Even among those who were not raised as evangelical Christians, the average reported age of a born-again experience is 20. Among those who were raised as evangelicals, it is 14.

Not surprisingly, an overwhelming majority of the leaders (90%) identify themselves as evangelical Christians. But a substantial minority also describe themselves as Pente-costal (25%) or charismatic (31%) Christians. Younger evangelical leaders are more likely to identify as Pentecostal Christians. Among those under age 40, for example, 31% say they are Pentecostals, as do 29% of those in their 40s, compared with 22% of those in their fifties and 16% of those age 60 or older. Younger leaders are also more likely to identify as charismatic Christians (35% of those under 40, compared with 23% of those 60 and older). 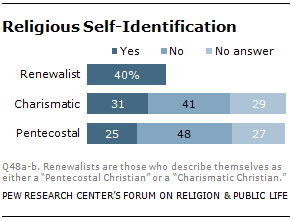 For the purposes of this report, those who identify themselves as either charismatic or Pentecostal Christians on these questions are grouped together and referred to as renewalist Christians, or simply renewalists. Four-in-ten leaders at the Congress are included in this umbrella category. By contrast, only 11% of the leaders say they think of themselves as fundamentalist Christians. 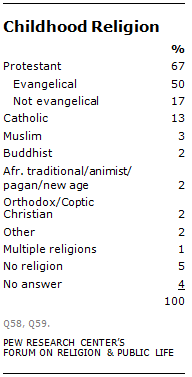 B. What Does it Mean to be an Evangelical? 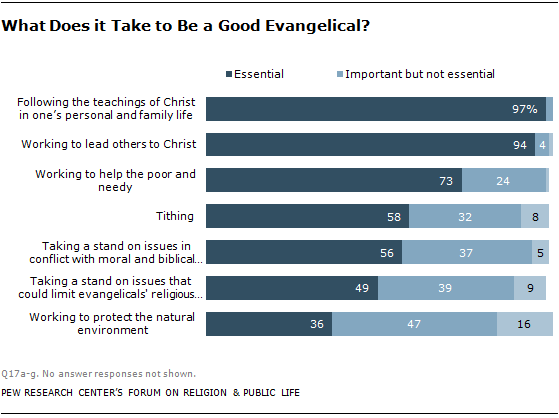 Tithing – or giving at least a tenth of one’s income to the church – is deemed essential for being a good evangelical Christian by 58% of the leaders; 32% say tithing is important but not essential, and 8% consider tithing either not too important or not at all important. Leaders from Europe are less likely than those in other regions to say tithing is essential for being a good evangelical. About a third of European leaders (36%) say tithing is essential, compared with 59% of North American leaders and 66% of leaders in the Global South.

There is strong consensus among the leaders on the compatibility of some religious beliefs and practices with evangelicalism. More than nine-in-ten see no problem, for example, with believing that miracles can take place today (94%) or believing in divine healing (93%). 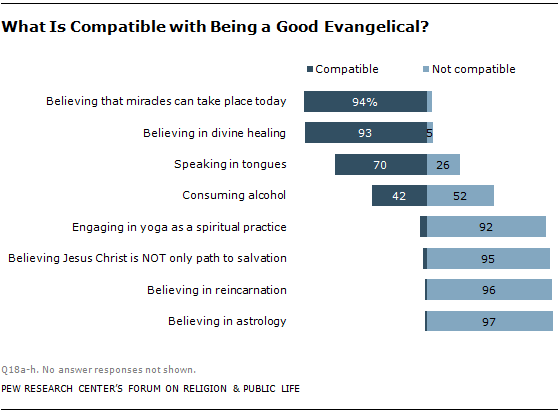 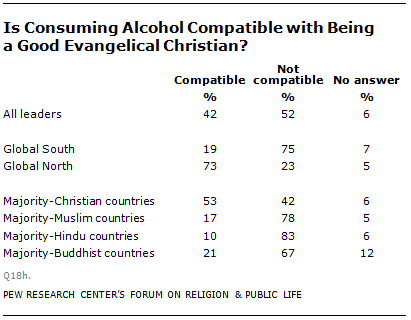 Nearly all of the Lausanne leaders (96%) believe that Christianity is the one, true faith leading to eternal life. Only 1% say that many religions can lead to eternal life. 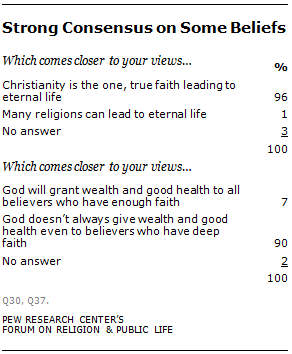 Nearly all of the Lausanne Congress participants (98%) believe that the Bible is the Word of God. However, there is an almost even split between those who believe that everything in the Bible should be taken literally (50%) and those who do not (48%). Global South leaders are more likely than those from the Global North to say that the Bible should be taken literally, word for word (58% vs. 40%).

U.S. leaders participating in the Congress are evenly split between those who take everything in the Bible literally and those who do not (48% to 49%, respectively). As a point of comparison, evangelical Protestants in the U.S. are more likely to say they read the Bible literally; two-thirds (68%) take this view, while about one-quarter (27%) say that the Bible is the Word of God but that not everything in it should be taken literally, word for word.12 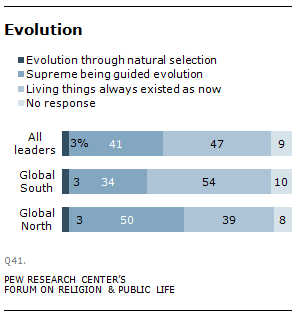 A slight majority of leaders (52%) believe that Christ will either probably (44%) or definitely (8%) return in their lifetimes. Six-in-ten leaders (61%) also say they believe in the Rapture of the Church — the teaching that believers will be instantly caught up with Christ before the Great Tribulation, leaving non-believers behind to suffer on Earth.

When it comes to these beliefs about eschatology or the End Times, regional differences once again are notable. Two-thirds of Global South leaders (67%) say Christ definitely or probably will return in their lifetimes, compared with a third of Global North leaders (34%). Renewalist leaders are also more likely than non-renewalists to believe that Christ is likely to return in their lifetimes (60% vs. 47%). Among leaders from the Global South, 73% say they believe in the Rapture, compared with 44% of Global North leaders. But majorities of those surveyed from all regions except Europe believe in the rapture of the Church; evangelical leaders from sub-Saharan Africa are especially likely to believe in the Rapture (82%).

The global evangelical leaders tend to be frequent church-goers. The vast majority (89%) say they participate in religious services at least once a week, with two-thirds (68%) saying they attend more than once a week. 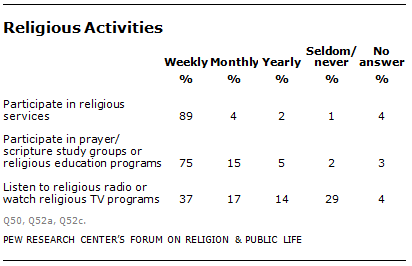 The evangelical leaders are also quite likely to say they participate in prayer or scripture study groups on a weekly basis (75%). By comparison, they listen to religious radio or watch religious TV programs less often; about a third (37%) do so weekly, and 29% do so seldom or never. 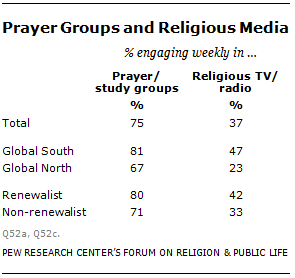 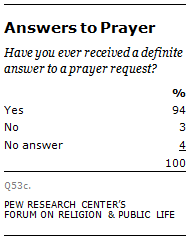 Nearly all the evangelical leaders surveyed (94%) say they have received a direct answer to a specific prayer request at some point in the past.

High numbers of the leaders surveyed also report having experienced or witnessed practices that are often associated with renewalist groups. For example, roughly half or more of the evangelical leaders report having spoken or prayed in tongues (47%), experienced or witnessed the devil or evil spirits being driven out of a person (57%), received a direct revelation from God (61%) or personally witnessed or experienced a faith healing (76%). A smaller but still significant number (40%) have given or interpreted prophecy. 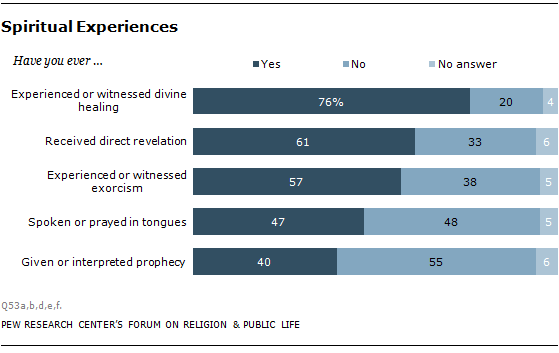 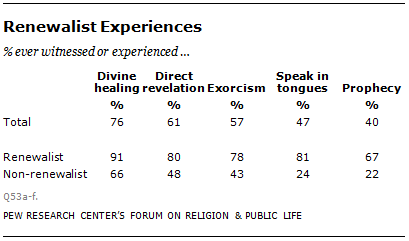 Not surprisingly, renewalist leaders (that is, those who identify as either Pentecostal or charismatic) are more likely than other leaders to report having these experiences. More than three-quarters of renewalists say they have witnessed or experienced a divine healing (91%), a direct revelation (80%), an exorcism (78%) and speaking in tongues (81%). And two-thirds of the self-identified renewalists surveyed (67%) have given or interpreted prophecy. While non-renewalist leaders are less likely to say they have experienced each of these things, large numbers still claim some of them. 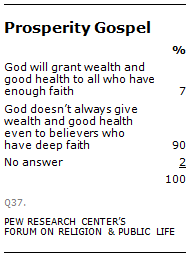 When it comes to the prosperity gospel – an issue that generates considerable controversy among Christians globally – the Lausanne leaders express a clear consensus. An overwhelming majority rejects the idea that God will grant wealth and good health to all believers who have deep faith. Only 7% of the leaders surveyed endorse the prosperity gospel, while 90% say that God does not always give wealth and good health to believers with deep faith. There is strong consensus on this point among renewalists and non-renewalists alike.

9 See, for example, the Pew Forum’s 2006 report, Spirit and Power: A 10-Country Survey of Pentecostals. (return to text)

10 See the Pew Research Center, Many Americans Say Other Faiths Can Lead to Eternal Life, 2008. (return to text)

11 For more details see the Pew Forum’s 2010 report, Tolerance and Tension: Islam and Christianity in Sub-Saharan Africa, 2010. (return to text)

Next: Tensions with Secularism and Modernity
← Prev Page
Page1Page2Page3You are reading page4Page5Page6Page7Page8Page9Page10Page11
Next Page →

Global Survey of Evangelical Protestant Leaders Preface Global South and Global North
Evangelical Beliefs and Practices
A. Religious IdentitiesB. What Does it Mean to be an Evangelical?C. BeliefsD. PracticesE. Renewalist Experiences
Tensions with Secularism and Modernity Intergroup Relations Priorities and Strategies for Evangelization Why Cape Town 2010? Morality, Society and Politics Appendix A: Survey Methodology Appendix B: Survey Topline