For this report on the public’s policy agenda for the current year, we surveyed 1,504 U.S. adults by telephone in January 2020. The surveys were conducted in both English and Spanish over the phone under the direction of Abt Associates. Respondents to this survey were randomly selected via a combination of landline and cell phone random-digit-dial samples. To ensure that the results of this survey reflects a balanced cross section of the nation, the data are weighted to match the U.S. adult population by gender, age, education, race and ethnicity and other categories. 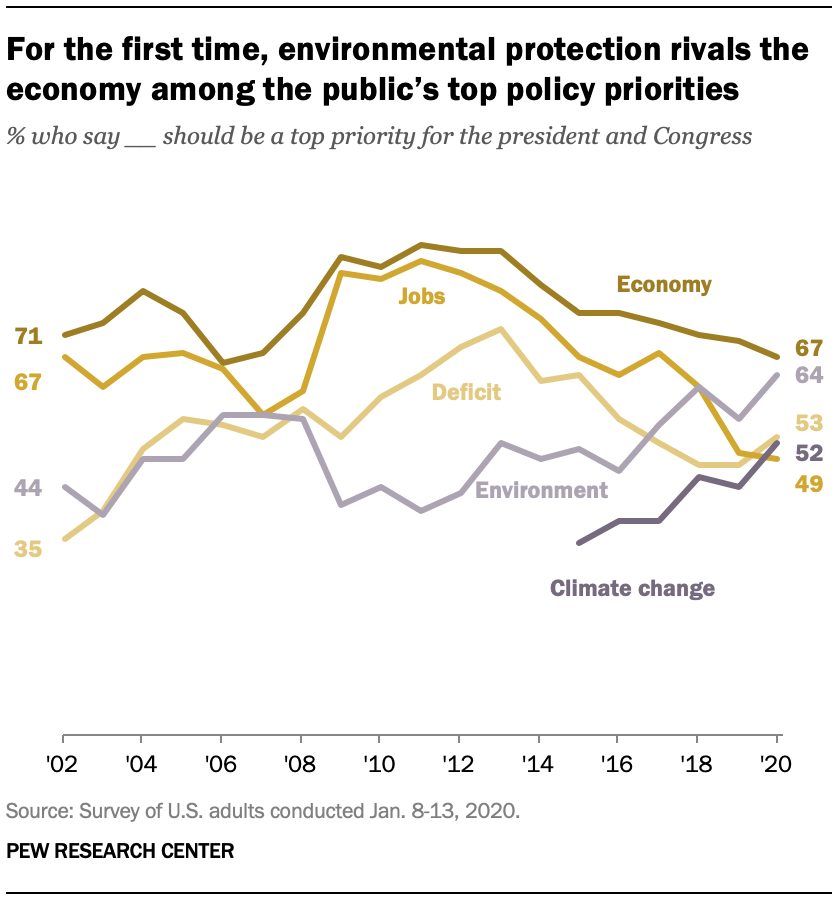 Reflecting a strong U.S. economy, Americans’ policy priorities have changed in recent years. The public now places less priority on economic and job concerns than it did just a few years ago. At the same time, environmental protection and global climate change are rising on the public’s agenda for the president and Congress.

For the first time in Pew Research Center surveys dating back nearly two decades, nearly as many Americans say protecting the environment should be a top policy priority (64%) as say this about strengthening the economy (67%).

The public’s concerns about jobs and the economy have decreased as perceptions of the national economy have improved. (For more on economic attitudes, see “Views of Nation’s Economy Remain Positive, Sharply Divided by Partisanship.”)

While environmental concerns have increased overall, partisanship continues to be a major factor in attitudes about the environment and climate change. Since 2017, virtually all the increase in the share of Americans saying global climate change should be a top priority has come among Democrats. Still, members of both parties are more likely to rate protecting the environment a top policy priority than did so a year ago, though this continues to be a much higher priority for Democrats than Republicans.

The national survey by Pew Research Center, conducted Jan. 8-13 on cellphones and landlines among 1,504 adults, finds that defending the country against terrorism remains a top priority among the public overall, as has been the case since 2002. Currently, 74% say defending the country from future terrorist attacks should be a top priority for the president and Congress this year – the highest of the 18 items included in the survey.

Defending against terrorism is followed by strengthening the economy, reducing health care costs and improving education, each of which is named as a top policy priority by 67% of the public. Nearly as many say that protecting the environment (64%) and taking steps to make Social Security financially sound (63%) should be top policy priorities. 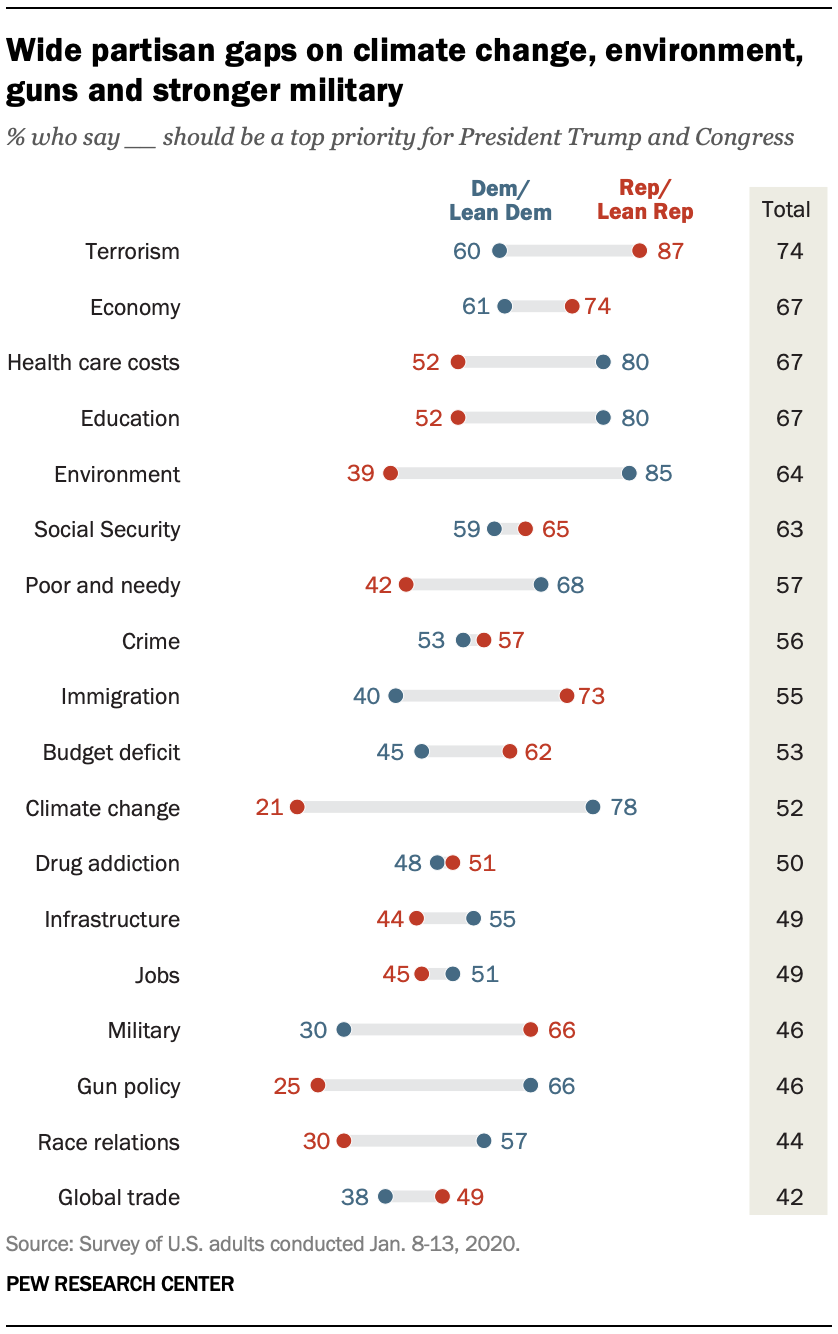 Large majorities of Democrats also place top priority on protecting the environment (85%), reducing health care costs (80%) and improving the educational system (80%). For Republicans, no more than about half rate these issues top priorities. And there is a sizable divide on the importance of addressing gun policy: Democrats are roughly 40 percentage points more likely than Republicans to view this as a top priority for the president and Congress (66% vs. 25%).

Among Republicans, defending the country from terrorist attacks (87%) ranks as the leading policy priority for the president and Congress, followed by strengthening the economy (74%) and dealing with the issue of immigration (73%). By contrast, about six-in-ten Democrats rate strengthening the economy (61%) and defending against terrorism (60%) as top priorities; fewer than half say this about dealing with immigration (40%). Republicans also are much more likely than Democrats to say strengthening the U.S. military should be a top priority for the president and Congress (66% vs. 30%).

Changing views of the environment and climate change

Over the past year, both Republicans and Democrats have become more likely to say protecting the environment should be a top priority. However, when it comes to dealing with global climate change, Democrats place greater importance on the issue than they did a year ago, while views among Republicans have not changed.

Overall, 85% of Democrats say protecting the environment should be a top priority for the president and Congress, up 11 percentage points from the share who said this in 2019. Fewer than half as many Republicans (39%) rate environmental protection as a major priority; still, this is up 8 points since last year and is the largest share of Republicans saying this in Pew Research Center surveys over the past decade.

Democrats and Republicans have long been far apart in their views of the importance of climate change. But the differences are now wider than ever: 78% of Democrats say addressing this issue is a top priority, up from 67% who said this last year. By contrast, the relatively small share of Republicans who say addressing climate change is a top priority (21%) is unchanged from a year ago.

Over the past several years, climate change has increased markedly as a policy priority among Democrats. In 2015, 46% of Democrats said it was a top priority, ranking it among the lower half of Democrats’ priorities for the president and Congress. Since then, the share of Democrats rating it as a major priority has increased more than 30 points; today it is in the top tier of Democrats’ policy concerns, along with environmental protection, health care costs and education.

Long-term declines in the shares rating economic concerns as priorities 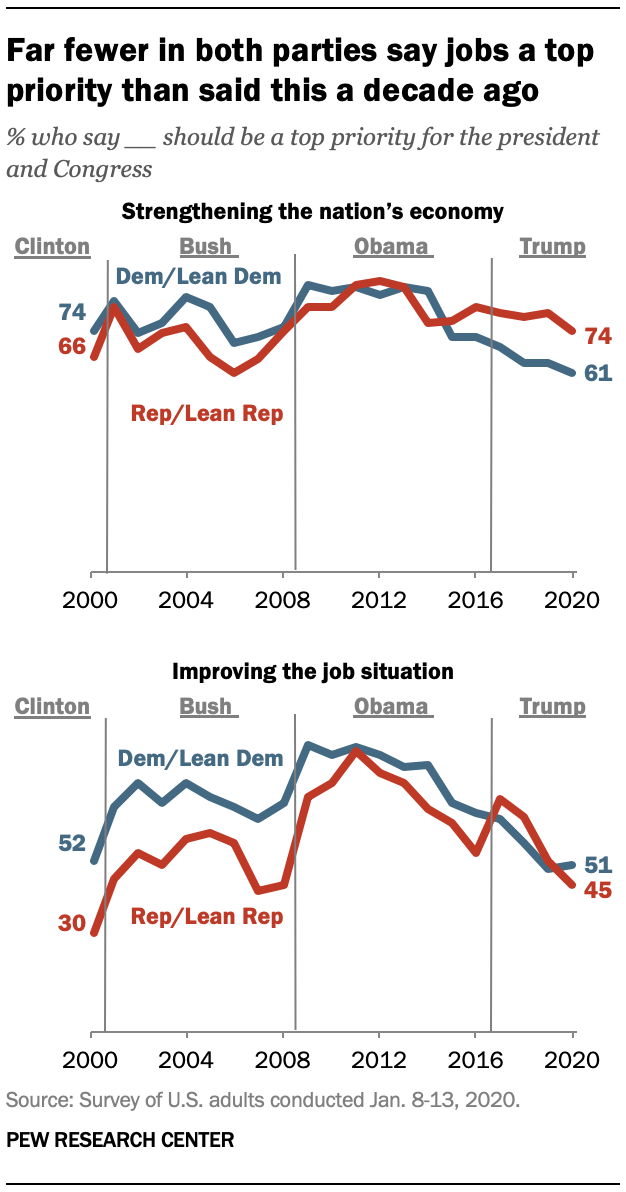 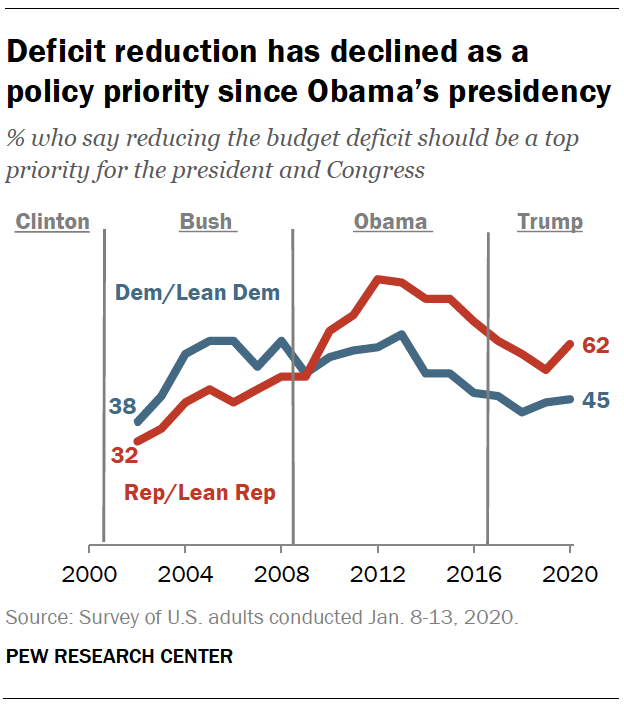 Currently, deficit reduction (53% top priority) ranks close to climate change as a mid-tier public priority. Among the public overall, concern over the deficit is down sharply from the start of Barack Obama’s second term (73% called it a top priority in 2013). 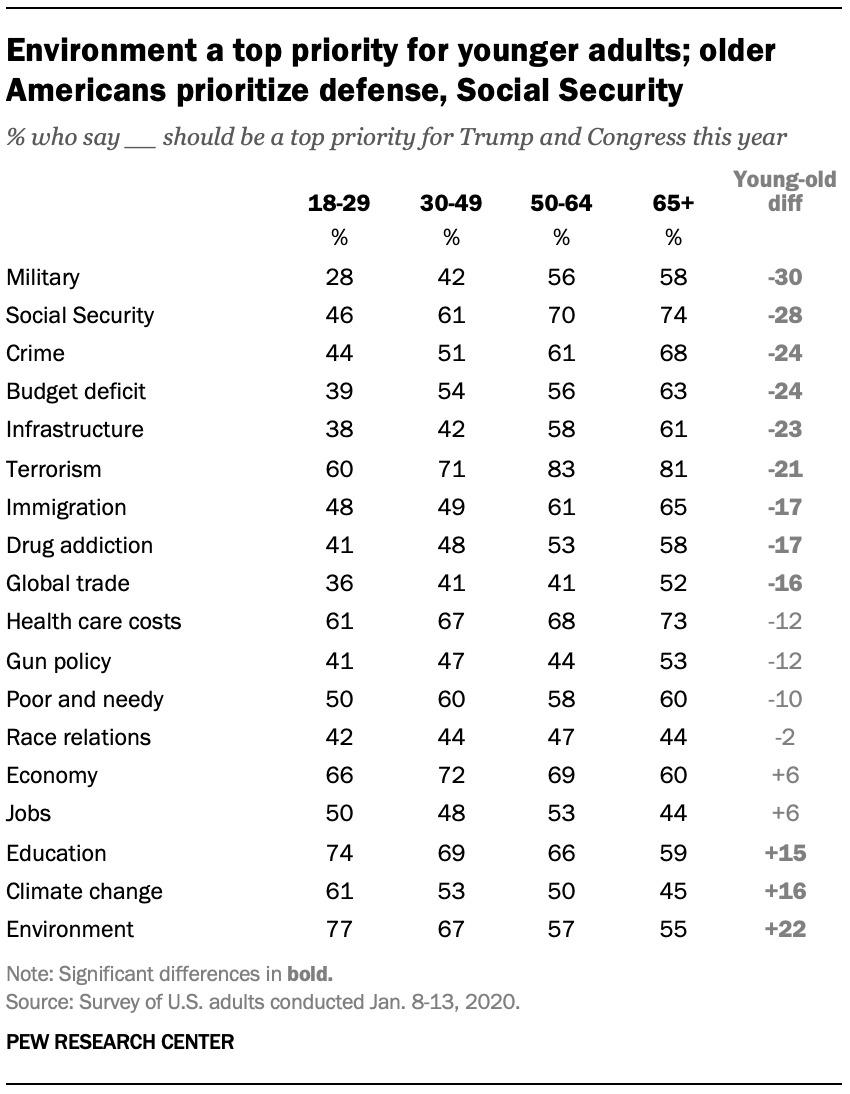 A majority of adults ages 50 and older (57%) say strengthening the military should be a top priority for the president and Congress. Fewer of those ages 30 to 49 (42%) rate this as a top priority, as do just 28% of those under 30.

The age differences are nearly as stark in views of keeping Social Security financially sound. Majorities of those older than 30 say this should be a top priority, compared with 46% of those younger than 30.

Several other policy priorities – including reducing crime, cutting the budget deficit and defending the nation against terrorism – also are viewed as top priorities by larger shares of older adults than by young people.

By contrast, Americans under the age of 30 are more likely to prioritize protecting the environment (77% vs. 55%), improving the educational system (74% vs. 59%) and dealing with climate change (61% vs. 45%) than are older Americans.

Women are more likely than men to prioritize a range of policy goals, particularly dealing with gun policy and addressing global climate change. 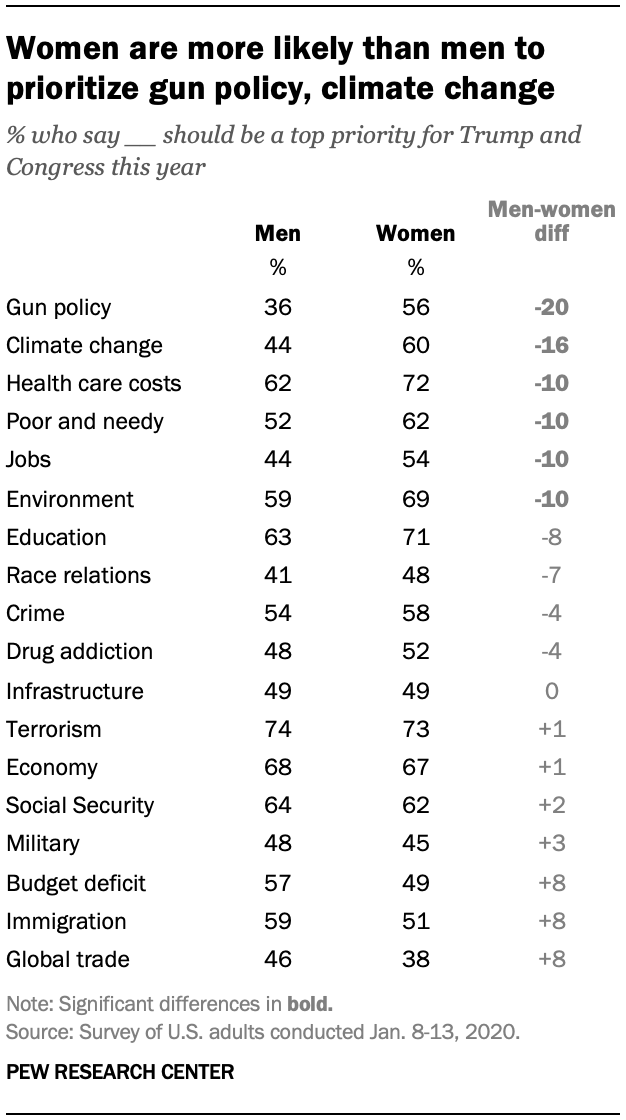 While a 56% majority of women say dealing with gun policy is a top priority, only about a third of men (36%) say the same. And women are 16 percentage points more likely than men to say that dealing with global climate change should be a top policy priority (60% vs. 44%).

Larger shares of women than men also prioritize reducing health care costs, dealing with the problems of the poor and needy, improving the job situation and protecting the environment. 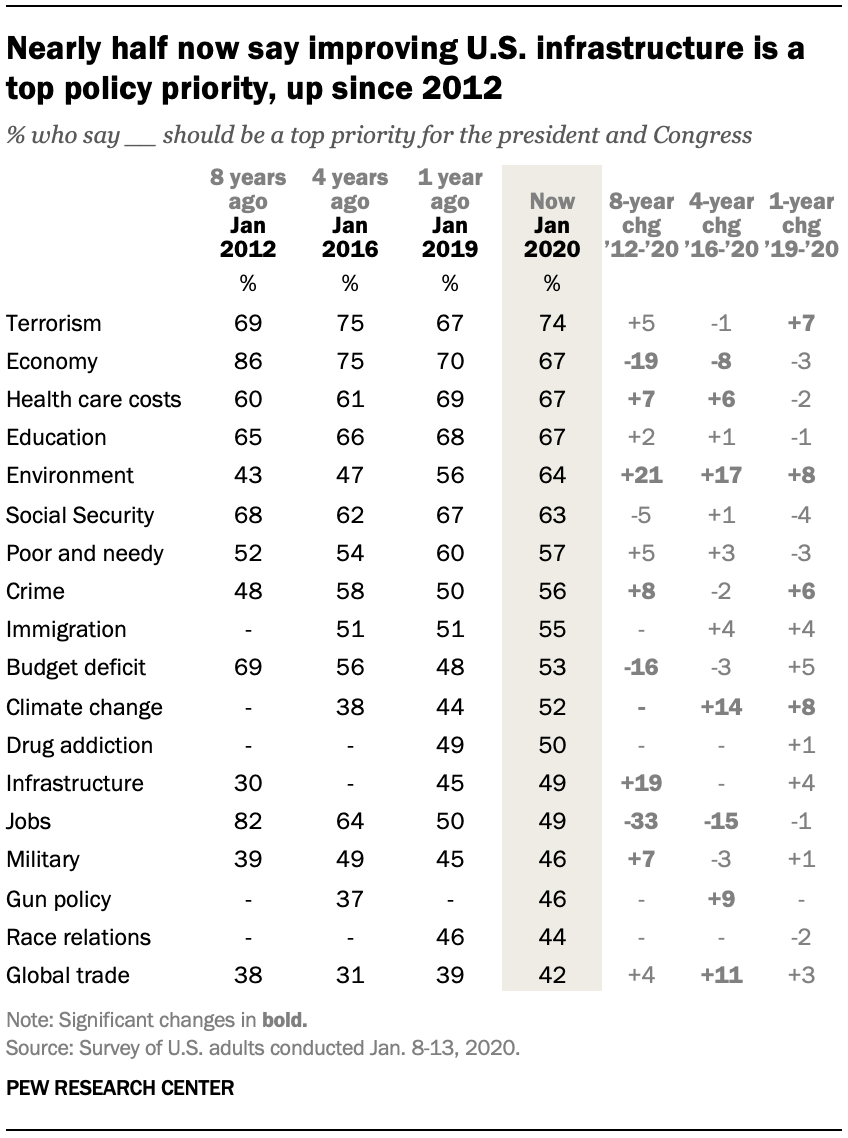 There have been sizable changes in the public’s policy priorities since 2016 and 2012, the previous presidential election years.

Economic concerns have declined since 2012, when the unemployment rate was more than double its current level of 3.6%.

The share of Americans who say improving the job situation is a top priority has declined by 33 percentage points since 2012 and 15 points since 2016. Similarly, while an overwhelming share of the public (86%) cited strengthening the economy as a major priority in 2012, and 75% did so four years later, that has now fallen to 67%.

Over the same period, protecting the environment has risen on the public’s agenda. In 2012, 43% of Americans rated this as a top priority. Today, more than six-in-ten (64%) do so. And 49% of Americans now say improving the country’s roads, bridges and public transportation systems should be a top priority, up from 30% in 2012.

Yet the public’s views of several priorities have shown little change during the past eight years. Currently, nearly three-quarters of Americans (74%) say defending against terrorism should be a top priority; this is comparable to shares saying this in 2016 (75%) and 2012 (69%). And there have been only modest changes in the shares rating strengthening Social Security as a top priority over this period.