Most Americans have not changed their views on whether the House should conduct impeachment proceedings against President Donald Trump since early September, before House Speaker Nancy Pelosi announced that the House would conduct an impeachment inquiry of the president. 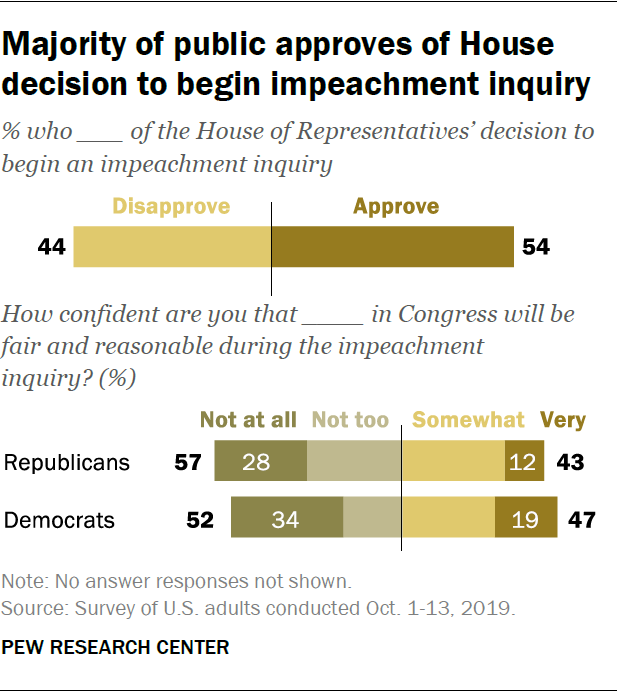 But about one-in-ten adults (9%) who had opposed the House opening impeachment proceedings last month now approve of the decision to conduct an impeachment inquiry, based on an analysis that tracks change in opinion among the same survey respondents over time.

Most of those who had opposed opening impeachment proceedings and now approve of the decision are Democrats and Democratic-leaning independents (61%); about a third (32%) are Republicans and Republican leaners.

The new survey by Pew Research Center, conducted Oct. 1-13 among 3,487 adults, finds that 54% currently approve of the House’s decision to conduct an impeachment inquiry, while 44% disapprove.

Neither party engenders a great deal of confidence that they will be “fair and reasonable” during the impeachment inquiry, the survey finds. About four-in-ten (43%) expect that the Republicans in Congress will be fair in handling the inquiry, while slightly more (47%) say the same about the Democrats in Congress.

The survey, conducted on Pew Research Center’s American Trends Panel, enables us to examine opinions about impeachment among the same group of respondents over the past month. In an earlier wave of the online survey conducted in early September (Sept. 3-15) – before details about Trump’s call with Ukrainian President Volodymyr Zelensky were made public and Pelosi announced that the House would be moving forward with the inquiry – respondents were asked a somewhat different question about whether they favored or opposed the House conducting impeachment proceedings against Donald Trump.

In that survey, 50% said they favored the House launching impeachment proceedings, while an identical share was opposed. The vast majority of those who now either approve or disapprove of the House conducting an impeachment inquiry (85%) held similar views in early September. 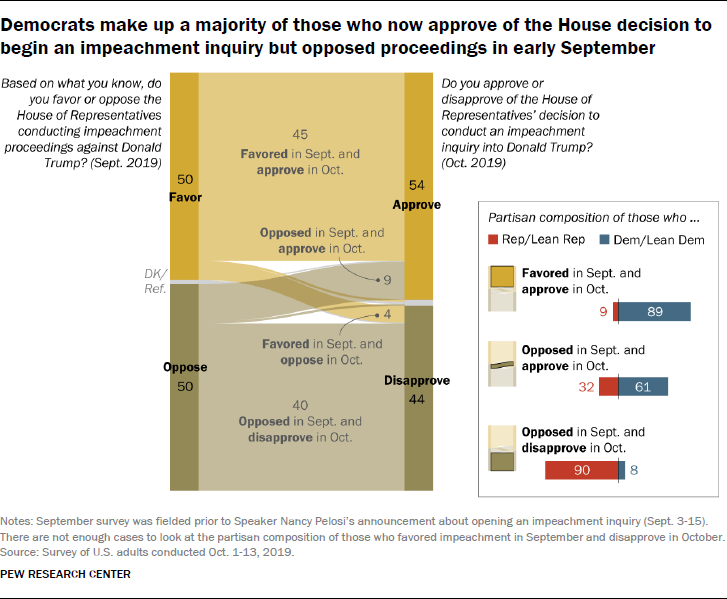 However, 9% approve of the House’s decision to conduct an impeachment inquiry against Trump and opposed starting proceedings last month. As noted, Democrats make up most of this group: 35% identify as Democrats, 26% lean Democratic, 21% lean to the Republican Party and just 10% identify as Republicans.

A much smaller share of the public (4%) currently disapproves of the House decision to begin an impeachment inquiry, but favored the House opening impeachment proceedings last month.

Little confidence in either party to be ‘fair’ on impeachment

About four-in-ten (43%) expect that the Republicans in Congress will be fair and reasonable in handling the inquiry; 57% say they are not too confident or not at all confident. Nearly half (47%) are at least somewhat confident that congressional Democrats will be fair, while 52% have little or no confidence in the Democrats. 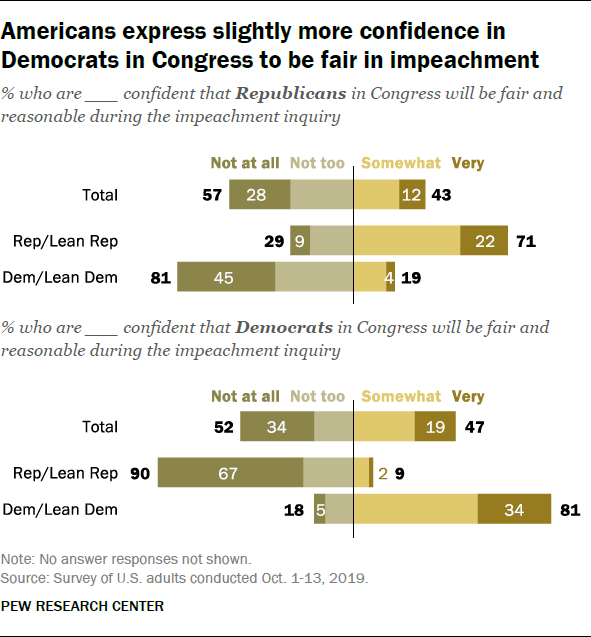 These views are deeply divided by party. About seven-in-ten Republicans and Republican leaners (71%) say they are at least somewhat confident in congressional Republicans to be fair, but only 22% say they are very confident. By contrast, 90% of Republicans express little or no confidence in Democrats in Congress – with 67% saying they are not at all confident. 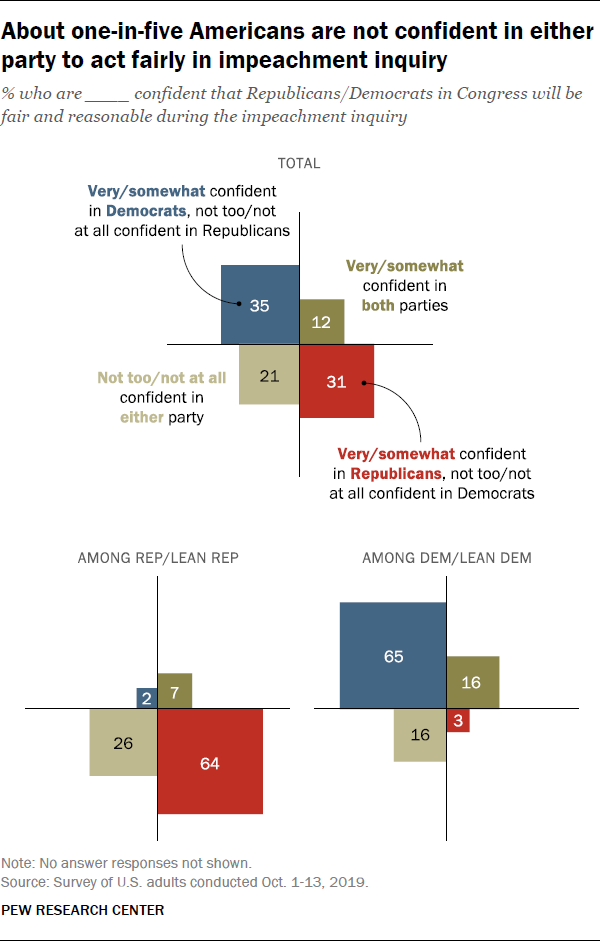 About two-thirds of partisans express confidence in their own party but not the other (64% of Republicans and Republican leaners and 65% of Democrats and Democratic leaners).

Partisanship is by far the most important factor in public attitudes about the impeachment inquiry. 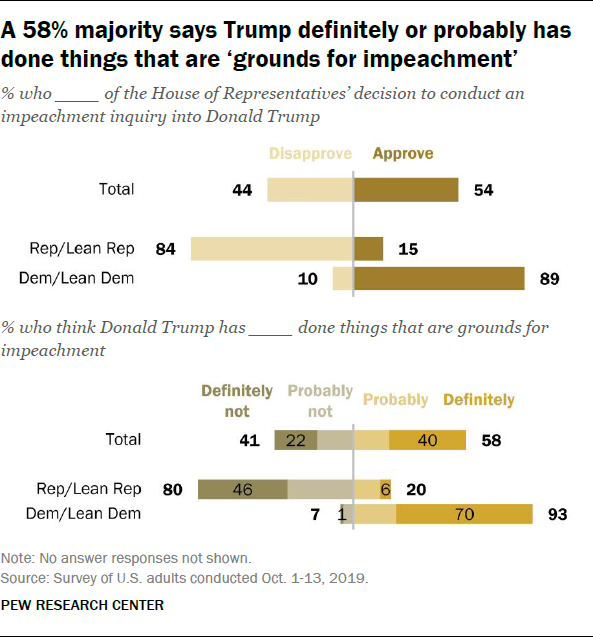 Partisan opinions are less symmetrical on whether Trump has definitely or probably “done things that are grounds for impeachment.”

There are age and educational differences in opinions about the House’s decision to launch and impeachment inquiry. A majority of adults under 30 (63%) approve of the House’s decision; older age groups are less supportive. And those who have completed college are more likely to approve of the impeachment inquiry than adults who do not have a four-year degree (61% vs. 51%). 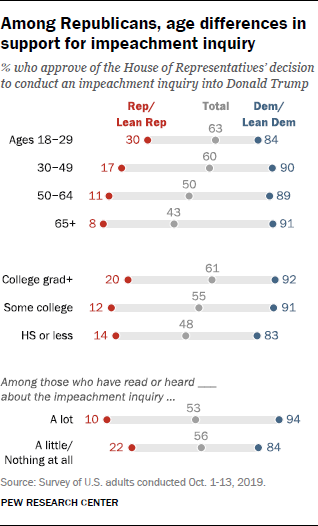 While majorities of Republicans and Republican leaners across all age categories disapprove of the impeachment inquiry, there is more support for the inquiry among young Republicans (30% of those younger than 30) than those 65 and older.

Democrats’ views of impeachment do not vary as much by age, but the support for impeachment is slightly lower among those with no college experience compared with those who have attended at least some college.

A large majority of political independents – those who decline to identify with one of the two major parties when asked – say they lean toward one of the parties. These independent leaners look much like partisans in their attitudes across a range of different issues. Attitudes about impeachment are no exception to this general pattern. Overall, 57% of those who do not identify with one of the two major parties approve of the impeachment inquiry. But independents who lean toward either the Republican or Democratic Party are very distinct in their views of impeachment. 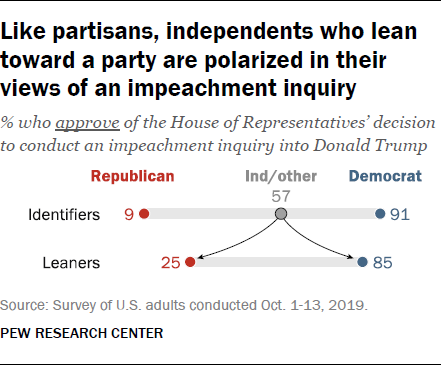