Independents often are portrayed as political free agents with the potential to alleviate the nation’s rigid partisan divisions. Yet the reality is that most independents are not all that “independent” politically. And the small share of Americans who are truly independent – less than 10% of the public has no partisan leaning – stand out for their low level of interest in politics.

Among the public overall, 38% describe themselves as independents, while 31% are Democrats and 26% call themselves Republicans, according to Pew Research Center surveys conducted in 2018. These shares have changed only modestly in recent years, but the proportion of independents is higher than it was from 2000-2008, when no more than about a third of the public identified as independents. (For more on partisan identification over time, see the 2018 report “Wide Gender Gap, Growing Educational Divide in Voters’ Party Identification.”) 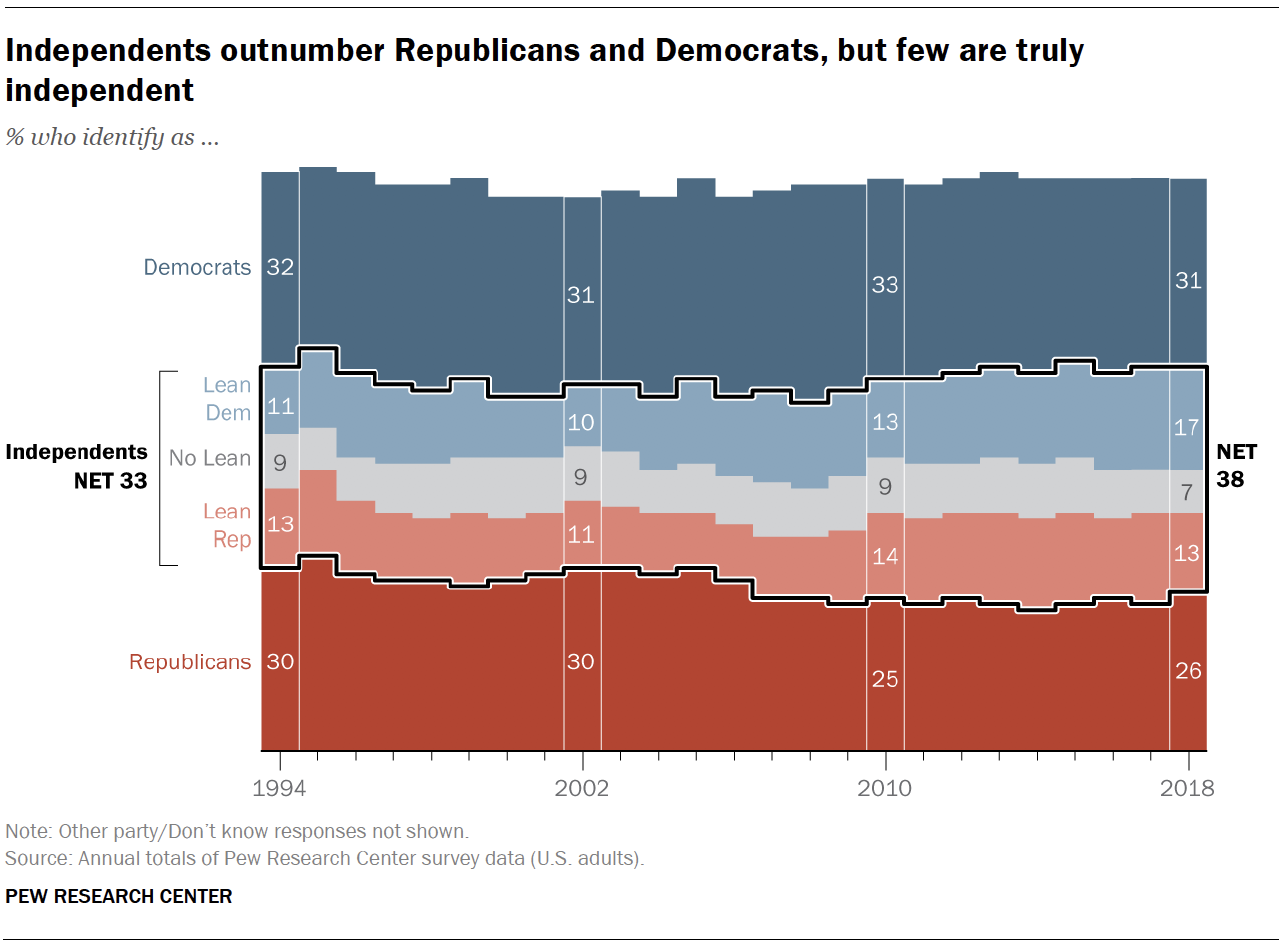 An overwhelming majority of independents (81%) continue to “lean” toward either the Republican Party or the Democratic Party. Among the public overall, 17% are Democratic-leaning independents, while 13% lean toward the Republican Party. Just 7% of Americans decline to lean toward a party, a share that has changed little in recent years. This is a long-standing dynamic that has been the subject of past analyses, both by Pew Research Center and others.

In their political attitudes and views of most issues, independents who lean toward a party are in general agreement with those who affiliate with the same party. For example, Republican-leaning independents are less supportive of Donald Trump than are Republican identifiers. Still, about 70% of GOP leaners approved of his job performance during his first two years in office. Democratic leaners, like Democrats, overwhelmingly disapprove of the president. 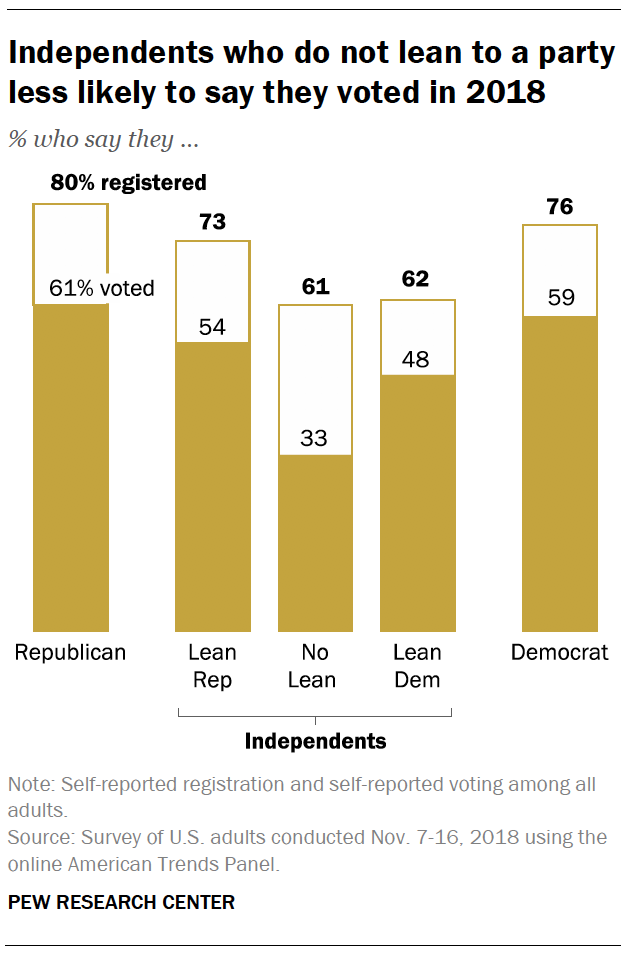 There are some issues on which partisan leaners – especially those who lean toward the GOP – differ substantially from partisans. While a narrow majority of Republicans (54%) opposed same-sex-marriage in 2017, nearly six-in-ten Republican-leaning independents (58%) favored allowing gays and lesbians to marry legally.

Independents stand out from partisans in several important ways. They are less politically engaged than Republicans or Democrats – and this is especially the case among independents who do not lean to a party.

In a survey conducted last fall, shortly after the midterm elections, partisan leaners were less likely than partisans to say they registered to vote and voted in the congressional elections. About half of Democratic-leaning independents (48%) said they voted, compared with 59% of Democrats. The differences were comparable between GOP leaners (54% said they voted) and Republicans (61%).

Among independents, men make up a sizable share (64%) of Republican leaners and a smaller majority (55%) of independents who do not lean. Democratic leaners include roughly equal shares of men (51%) and women (49%).

As Pew Research Center reported last year, Donald Trump’s job approval rating during the early stage of his presidency is more polarized along partisan lines than any president in the past six decades. In addition, Trump’s rating has been more stable than prior presidents. 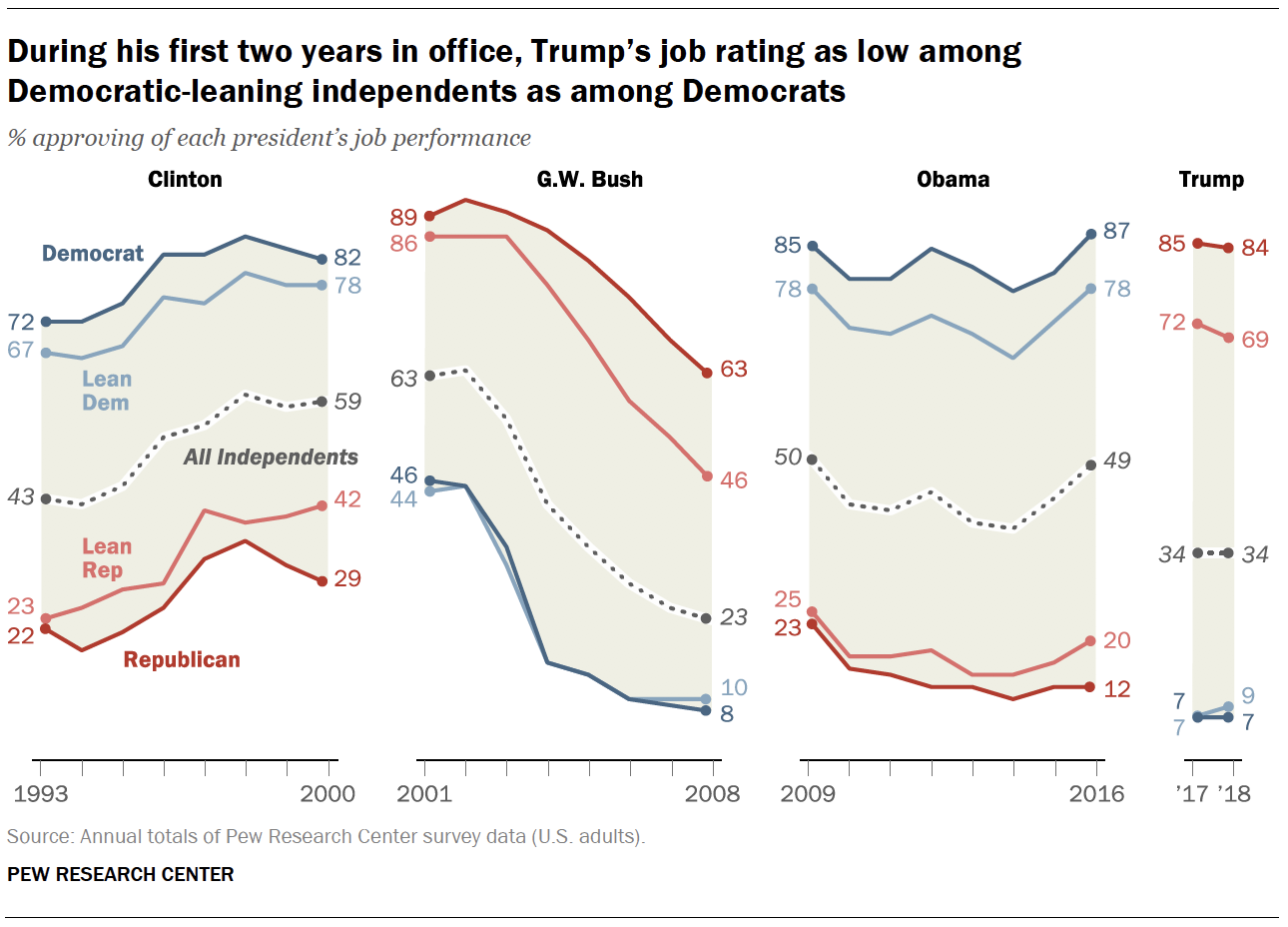 Trump’s rating also was low among independents who have no partisan leanings. Only about a quarter of non-leaners approved of Trump’s job performance during his first two years, while about six-in-ten (58%) disapproved.

On most issues, independents’ attitudes mirror the views of the overall public. Independents who lean toward a party are usually on the same side as those who identify with the same party, but the level of agreement between leaners and partisans varies depending on the issue.

By a wide margin (62% to 36%), independents oppose Trump’s signature policy proposal, an expansion of the U.S.-Mexico border wall. Democratic-leaning independents overwhelmingly oppose the border wall (95% disapprove), as do Democratic identifiers (92%).

Republican-leaning independents favor expanding the border wall, though by a smaller margin than Republicans identifiers. GOP leaners favor substantially expanding the wall along the U.S.-Mexico border by roughly three-to-one (75% to 23%). Among those who affiliate with the Republican Party, the margin is nearly eight-to-one (87% to 11%). 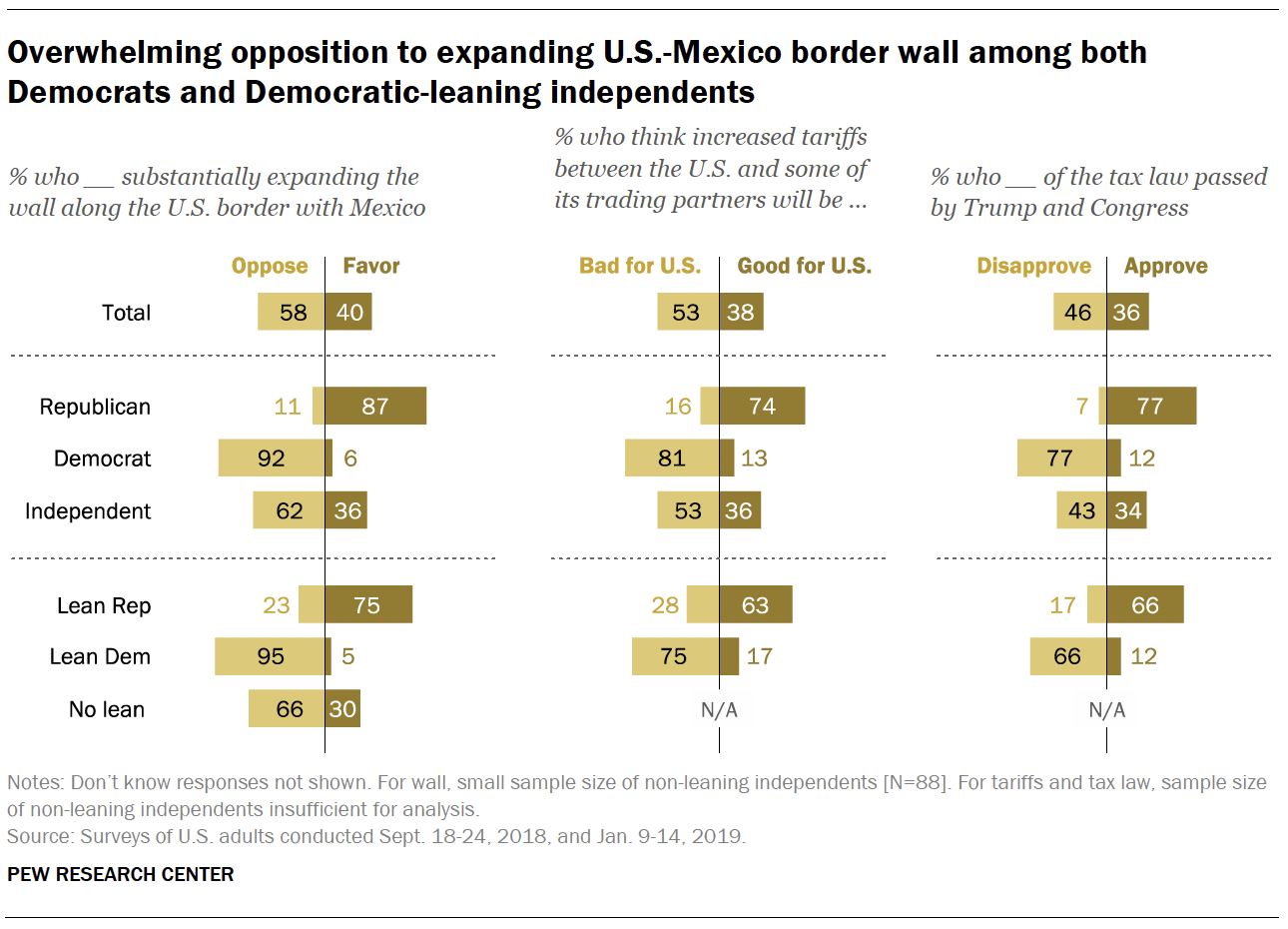 Independents also have a negative view of increased tariffs between the U.S. and its trading partners (53% say they will be bad for the U.S., 36% good for the U.S.). Independents’ views on the 2017 tax bill are more divided: 34% approve of the tax law and 43% disapprove. 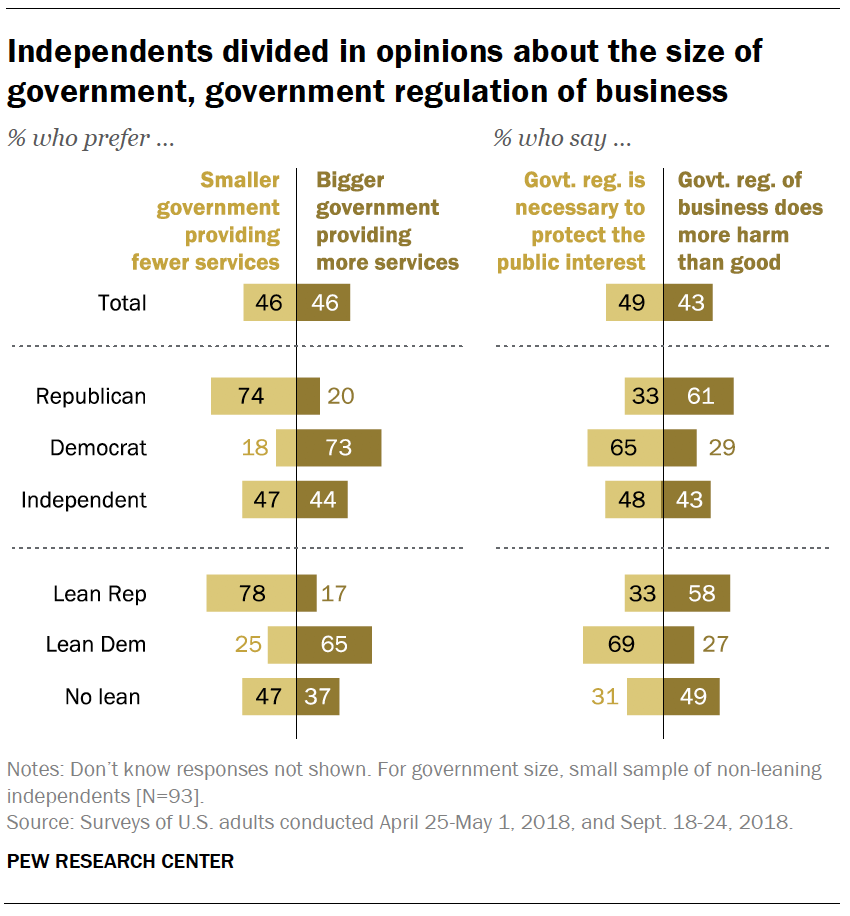 Overall, independents are divided in preferences about the size of government and views about government regulation of business.

The views of GOP leaners are nearly identical to the opinions of those who affiliate with the GOP (74% prefer smaller government). Like Democrats, most Democratic-leaning independents prefer bigger government.

Democrats and Democratic leaners are in sync in opinions about whether the nation’s economic system is generally fair. But there are sharper differences in the views of Republicans and GOP leaners.

Large majorities of both Democrats (85%) and Democratic leaners (81%) say the U.S. economic system unfairly favors powerful interests. Most independents who do not lean toward a party share this view (70%).

Majorities of independents say the U.S. needs to continue to make changes to give blacks equal rights with whites (57%) and that significant obstacles still make it harder for women to get ahead (54%). In addition, far more independents say immigrants do more to strengthen (66%) than burden (23%) the country.

In views of racial equality and women’s progress, the views of partisan leaners are comparable to those of partisans. Large majorities of Democrats and Democratic leaners say the U.S. needs to make more changes to give blacks equal rights and that significant obstacles stand in the way of women. Most Republicans and Republican leaners say the country has made needed changes to give blacks equal rights with whites, and that the obstacles blocking women’s progress are largely gone. 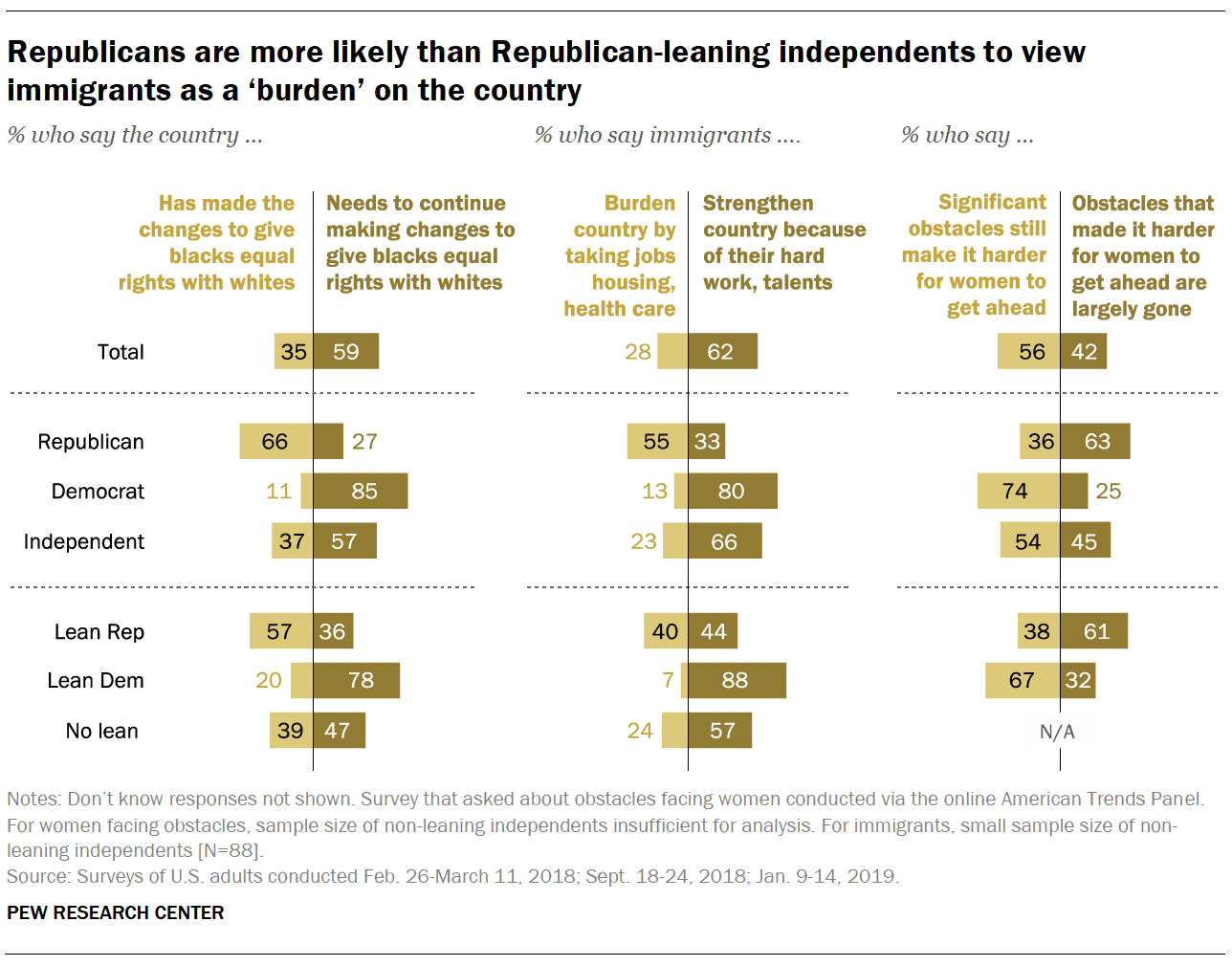 Views of immigrants’ impact on the country are largely positive among Democratic-leaning independents (88% say they strengthen the U.S.) and those who identify as Democrats (80%).

Public support for same-sex marriage has grown rapidly over the past decade. In June 2017, a majority of adults (62%) favored allowing gays and lesbians to marry legally, while just 32% were opposed.

Independents’ views of same-sex-marriage were similar to Democrats’: 73% of Democrats favored gay marriage, as did 70% of independents. Among those who identified as Republicans, just 40% favored same-sex marriage, while 54% were opposed. 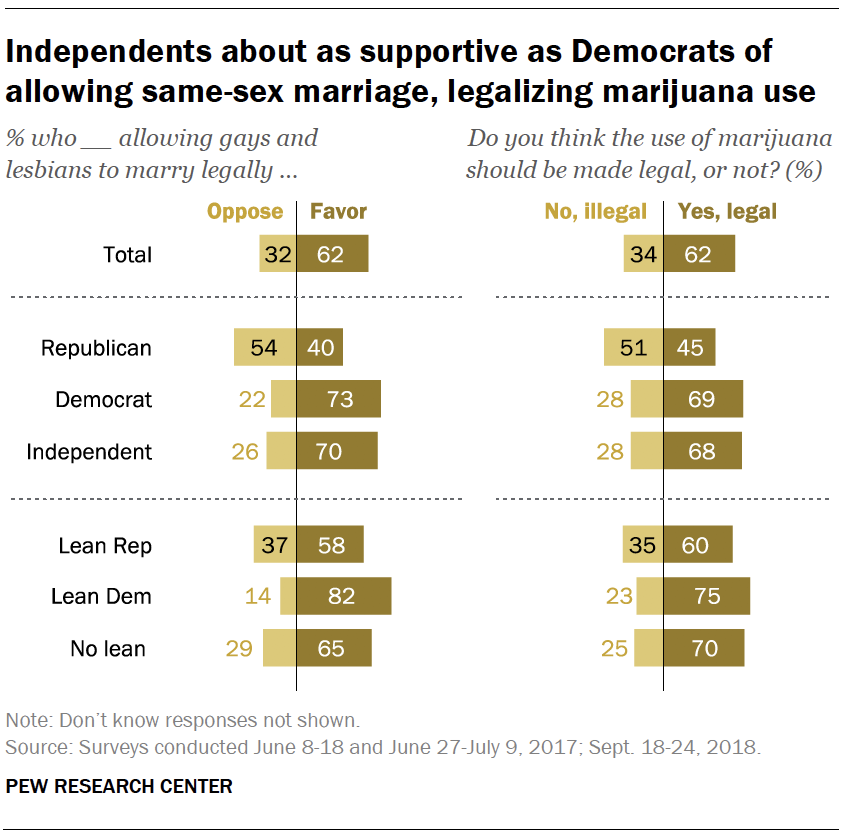 Public support for legalizing marijuana use has followed a similar upward trajectory in recent years. Currently, 62% of the public says the use of marijuana should be made legal, while 34% say it should be illegal.

Independents who do not lean to a party widely favored same-sex marriage (65% favor this), while 70% say the use of marijuana should be legal.

As in the past, more independents describe their political views as moderate (43%) than conservative (29%) or liberal (24%). These shares have changed little in recent years. 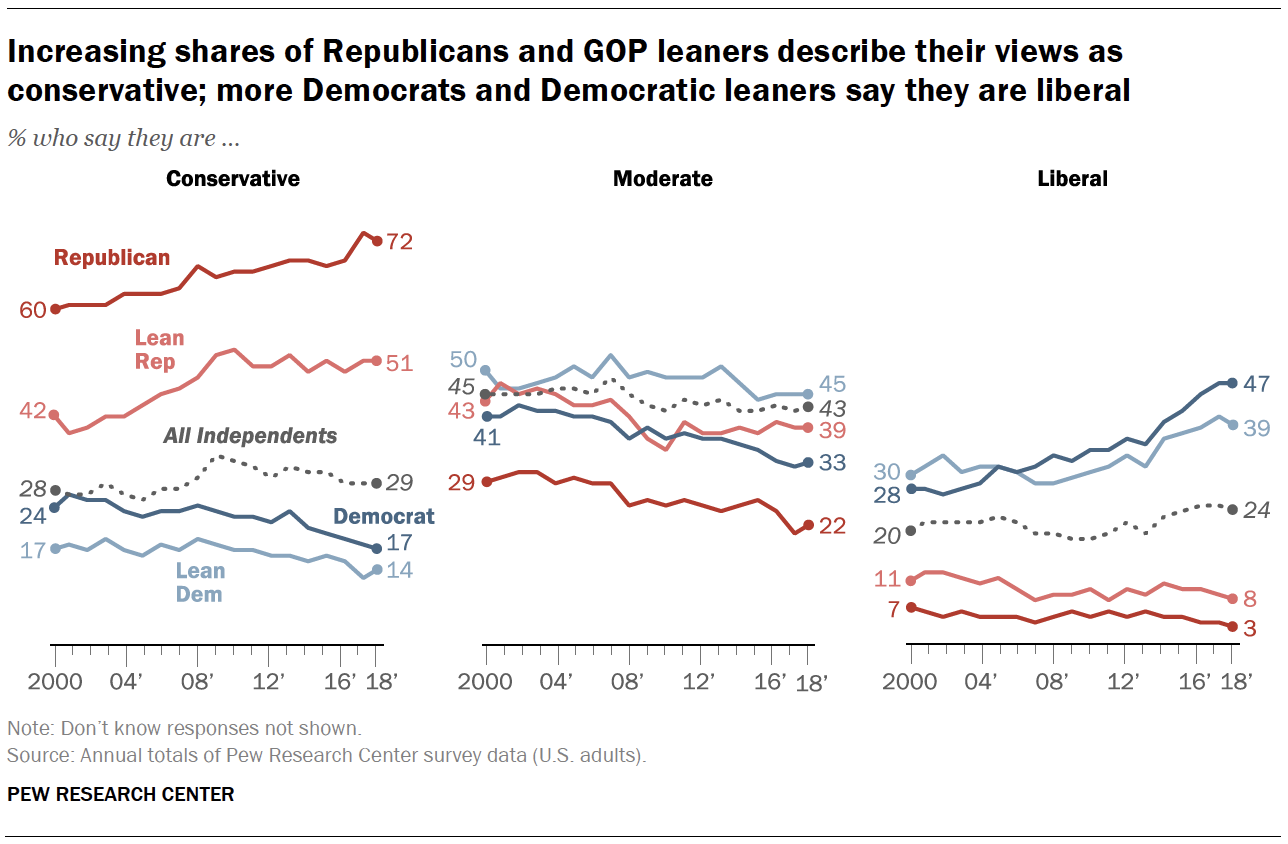 Over the same period, there has been growth in the shares of Democrats and Democratic leaners identifying as liberal. Among Democratic-leaning independents, slightly more identify as moderates (45%) than as liberals (39%), while 14% are conservatives. But the gap has narrowed since 2000, when moderates outnumbered liberals, 50% to 30%.

How independents view the political parties 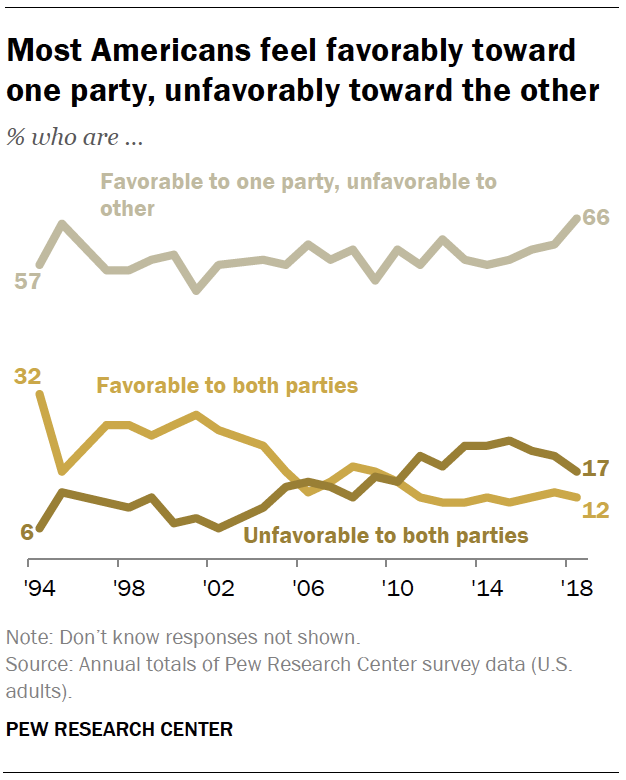 The share of Americans who have a positive view of one party and a negative view of the other has increased since 2015 (from 58%). Over the same period, there has been a decline in the share expressing a negative view of both parties, from 23% in 2015 to 17% currently.

Independents who lean toward a party are less likely than partisans to view their party favorably. In addition, far more independents (28%) than Republicans (10%) or Democrats (9%) have an unfavorable opinion of both parties.

Most of the change since then has come among Republican-leaning independents, who feel much more positively about the GOP than they did then. In July 2015, just 44% of GOP leaners had a favorable opinion of the Republican Party; 47% had an unfavorable view of both parties. Today, a majority of GOP leaners view the Republican Party favorably (55%), while just 24% view both parties unfavorably. 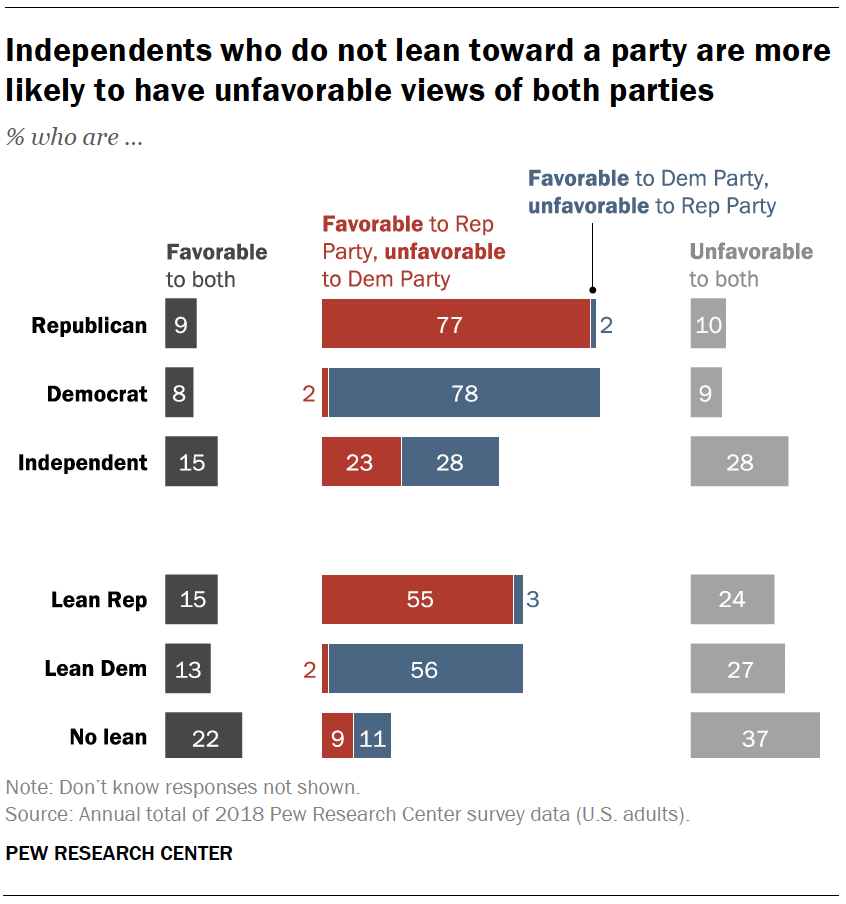 Over the past two decades, Republicans and Democrats have come to view the opposing party more negatively. The same trend is evident among independents who lean toward a party.

Perhaps more important, intense dislike of the opposing party, which has surged over the past two decades among partisans, has followed a similar trajectory among independents who lean toward the Republican and Democratic parties. 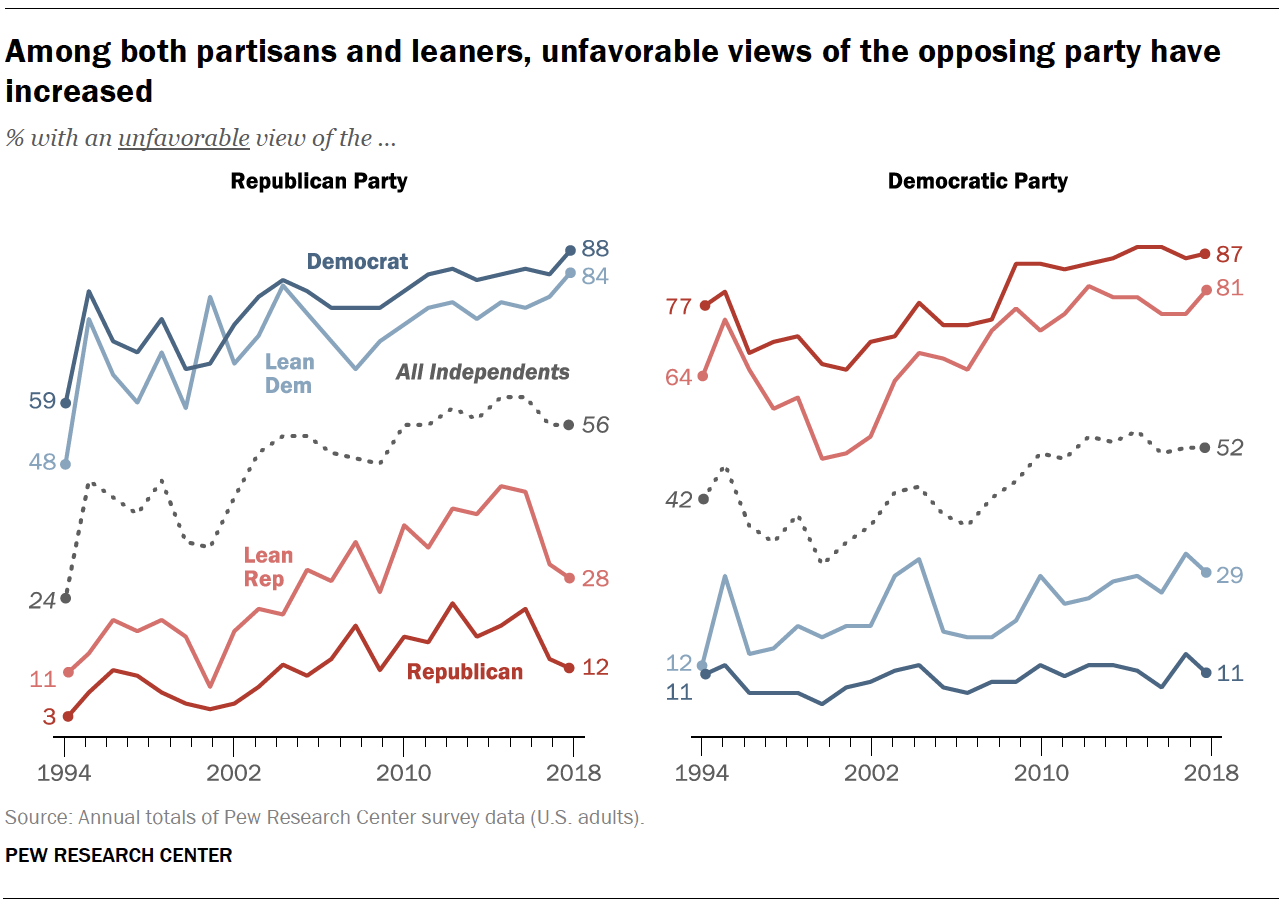 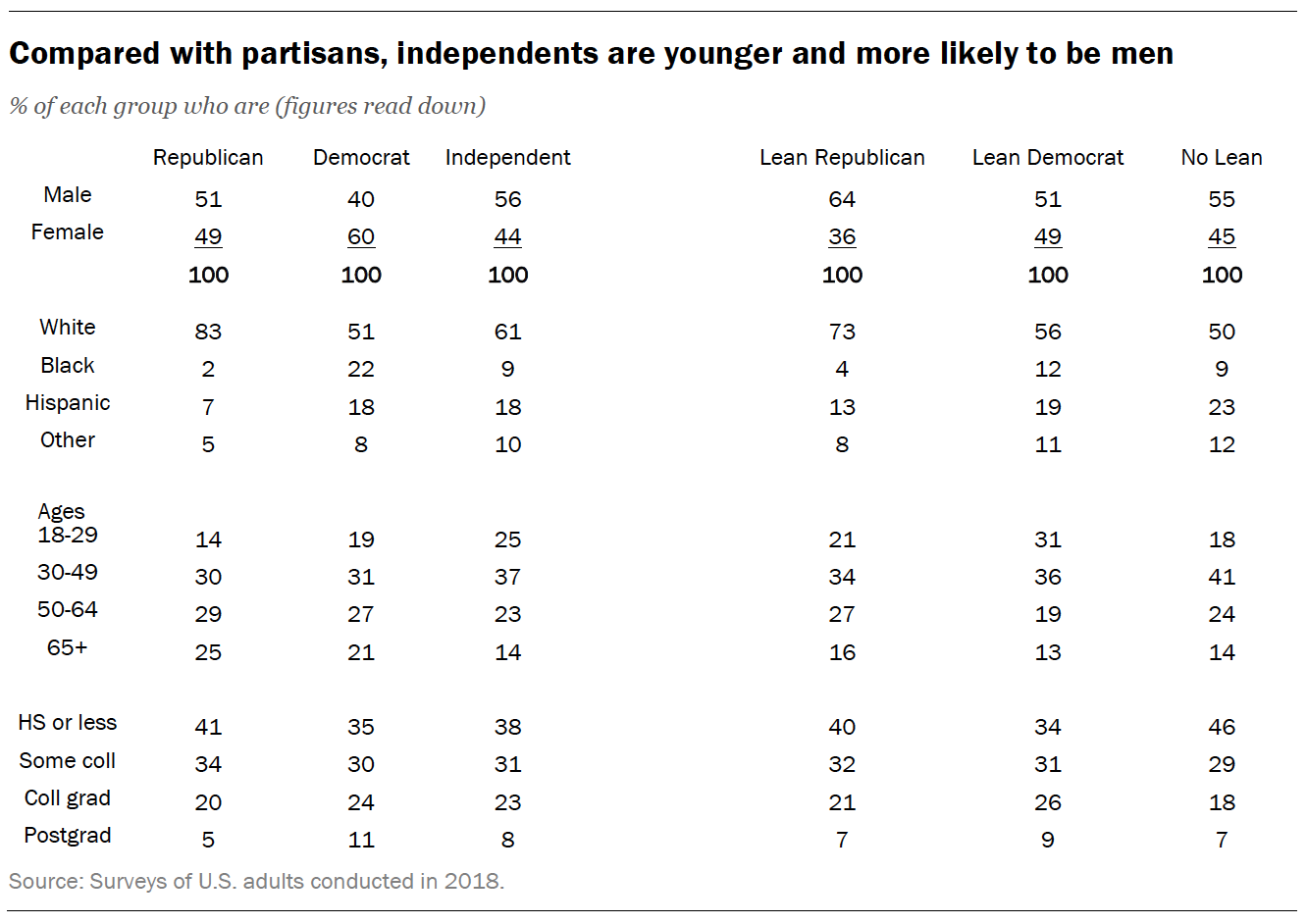 The Public, the Political System and American Democracy

The Partisan Divide on Political Values Grows Even Wider