Americans are much more cautious about talking politics with others than discussing a range of other subjects, including the weather and sports. 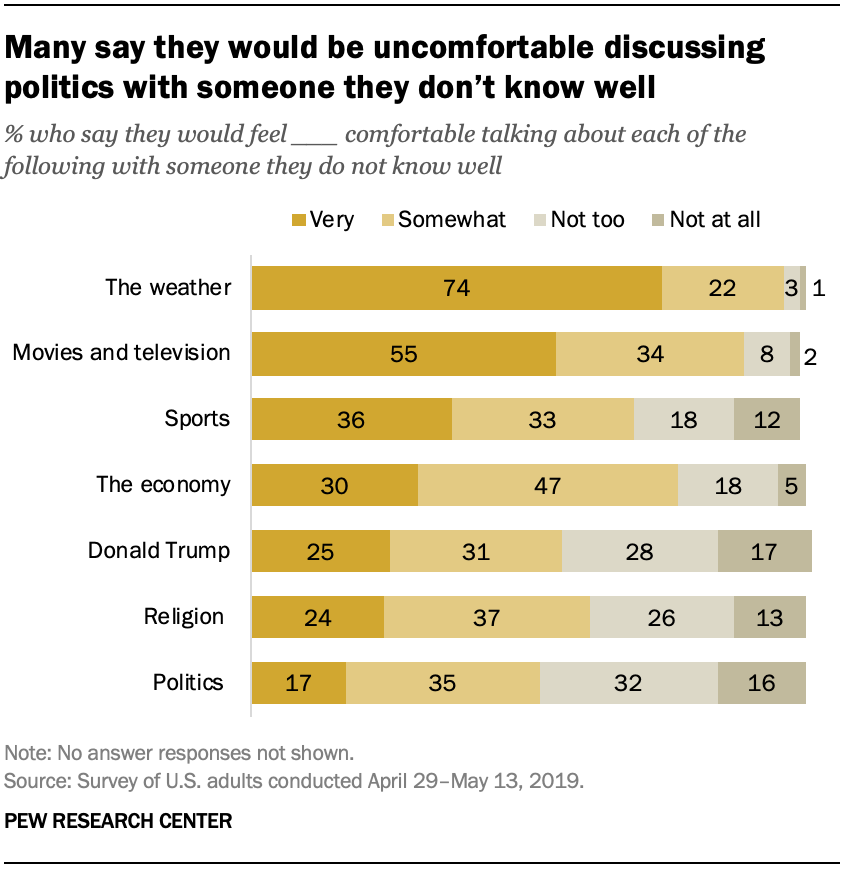 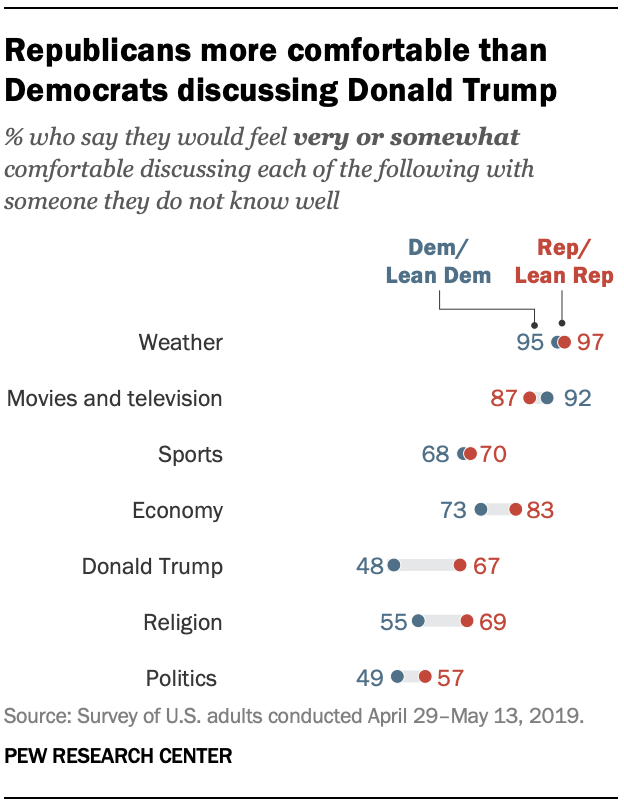 Partisans express similar levels of comfort discussing topics like the weather, sports and entertainment, but Republicans are more likely than Democrats to say they are comfortable talking about Donald Trump, the economy and religion.

Two-thirds of Republicans and Republican leaners (67%) say they would be very or somewhat comfortable talking about Trump with someone they don’t know well, while only about half of Democrats and Democratic leaners (48%) say this.

When it comes to political conversations with those they disagree with, the public is split in their reactions: Half say talking politics with people they disagree with is generally stressful and frustrating, while about as many (48%) say it is interesting and informative.

Democrats and Democratic leaners (53%) are slightly more likely than Republicans and Republican leaners (47%) to say political conversations with people they disagree with are stressful and frustrating. The share of Democrats who find these conversations stressful is higher than it was in the spring of 2016 – prior to Donald Trump’s election – when 45% said this. Views among Republicans have changed little over the past several years.

Liberal Democrats are especially likely to say they find political conversations with people they disagree with frustrating: 63% say this, compared with 44% of conservative and moderate Democrats.

There also is an ideological divide in these views among Republicans: Conservatives (52%) are more likely than moderates and liberals (39%) to find talking politics with people they disagree with to be stressful and frustrating.

Offering your views on politics – and Trump – over dinner

When asked to think about being at a small dinner with strangers who disagree with them about Donald Trump, Americans who approve of his job performance are more likely to say they would share their own views about him than are those who disapprove. 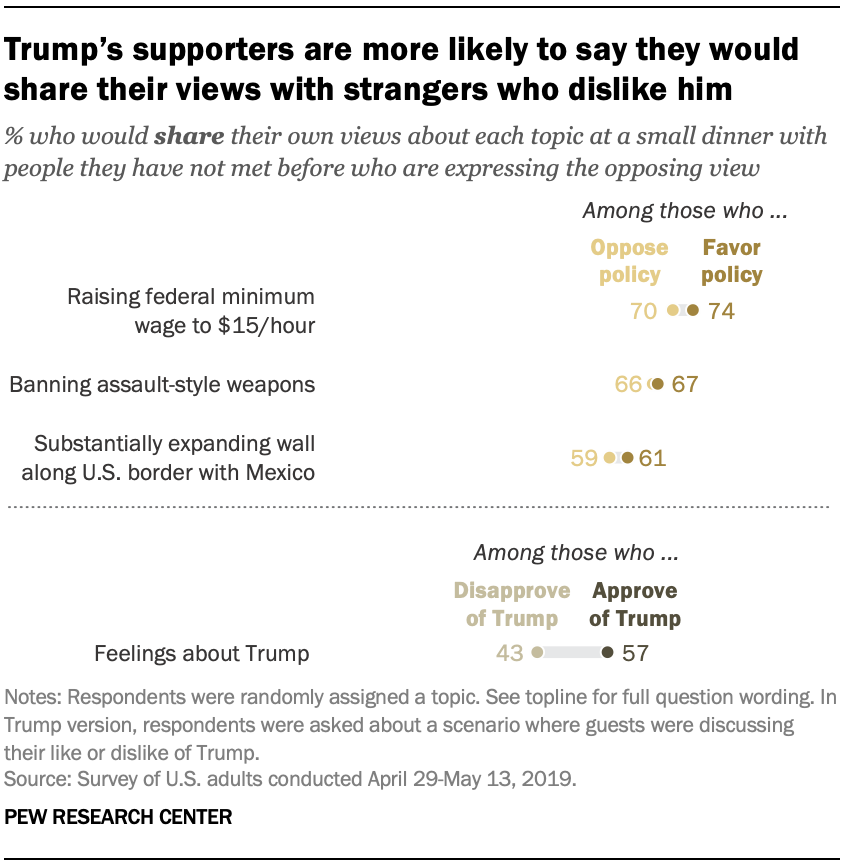 Nearly six-in-ten adults who approve of Donald Trump’s job performance (57%) say they would share their views about the president at a small dinner where the other guests are talking about how they really dislike Trump. Only about four-in-ten of those who disapprove of Trump (43%) say they would be likely to share their views in a scenario where people at the table were talking about how they really like Trump.

Similar dinner party scenarios were asked about for three other political topics (note: each respondent was only asked about one scenario). However, for these other topics – minimum wage, gun policy and a border wall with Mexico – there is no gap by issue position in the shares who would volunteer their views. For instance, 74% of those who favor raising the minimum wage to $15 an hour and 70% who oppose this say they would voice their opinions to a group of dining companions who are expressing views opposite to their own.

In addition, for all three issue areas, clear majorities – regardless of their stance on the topic – say they would express their views at the dinner. 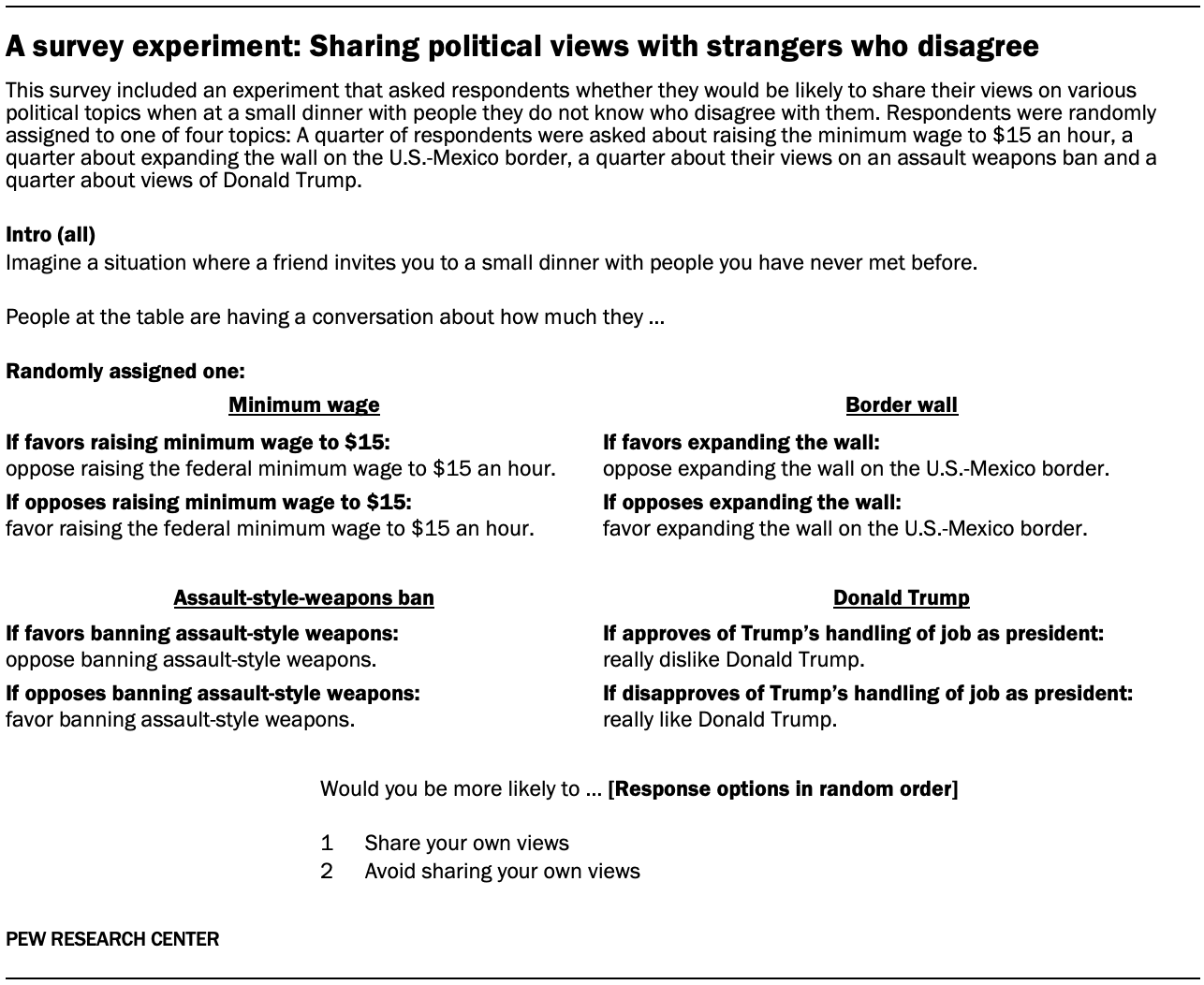 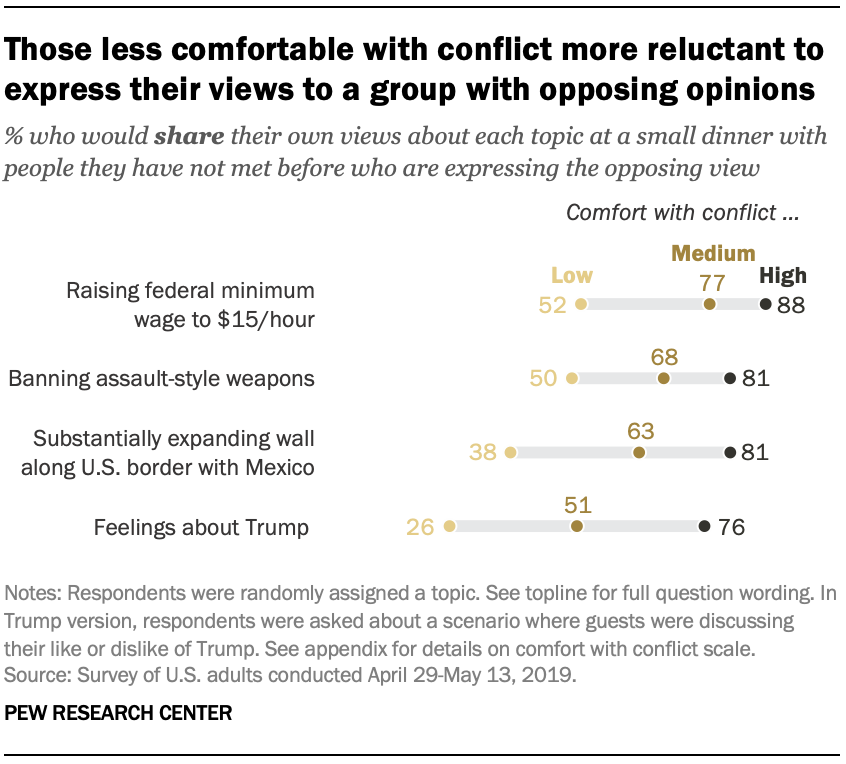 The association between comfort with conflict and willingness to share your own views in a small dinner setting holds across the three other issue areas, though it is especially pronounced in the scenario about views of Trump.

People’s willingness to share their views about Trump varies depending on the partisan makeup of the places where they live. 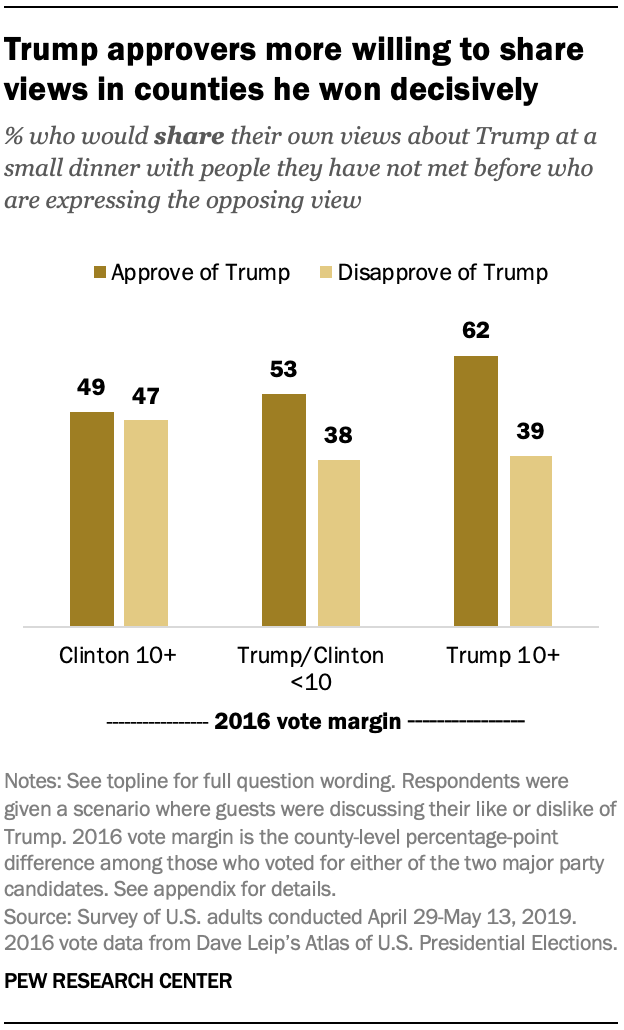 Trump approvers who live in counties that Trump won by wide margins over Hillary Clinton in 2016 are more likely than Trump approvers who live in more politically mixed places or in counties that Clinton won by wide margins to say they would share their views over dinner with a group of people who don’t like the president. There is a similar – but inverse – pattern in the willingness of those who disapprove of Trump to speak up among a group of people who like Trump.

About six-in-ten Trump approvers living in counties that Trump won by 10 percentage points or more in 2016 (62%) say they would share their views about the president at a small dinner where people at the table are having a conversation about how they really dislike Trump. By comparison, about half of Trump approvers who live in places where the election was decided by less than 10 points (53%) or in places that Clinton won by more than 10 points (49%) say they would share their views in this situation.

As a result, in counties that Trump won by 10 percentage points or more, there is a 23 percentage point gap between the share of Trump approvers (62%) and disapprovers (39%) who would express their views of the president at a dinner with those who disagree with them. By comparison, in counties that Clinton won by at least 10 points, Trump approvers (49%) and Trump disapprovers (47%) are about equally likely to say they would share their views if they were in this situation.

Why would you participate in – or avoid – contentious discussions about Trump? 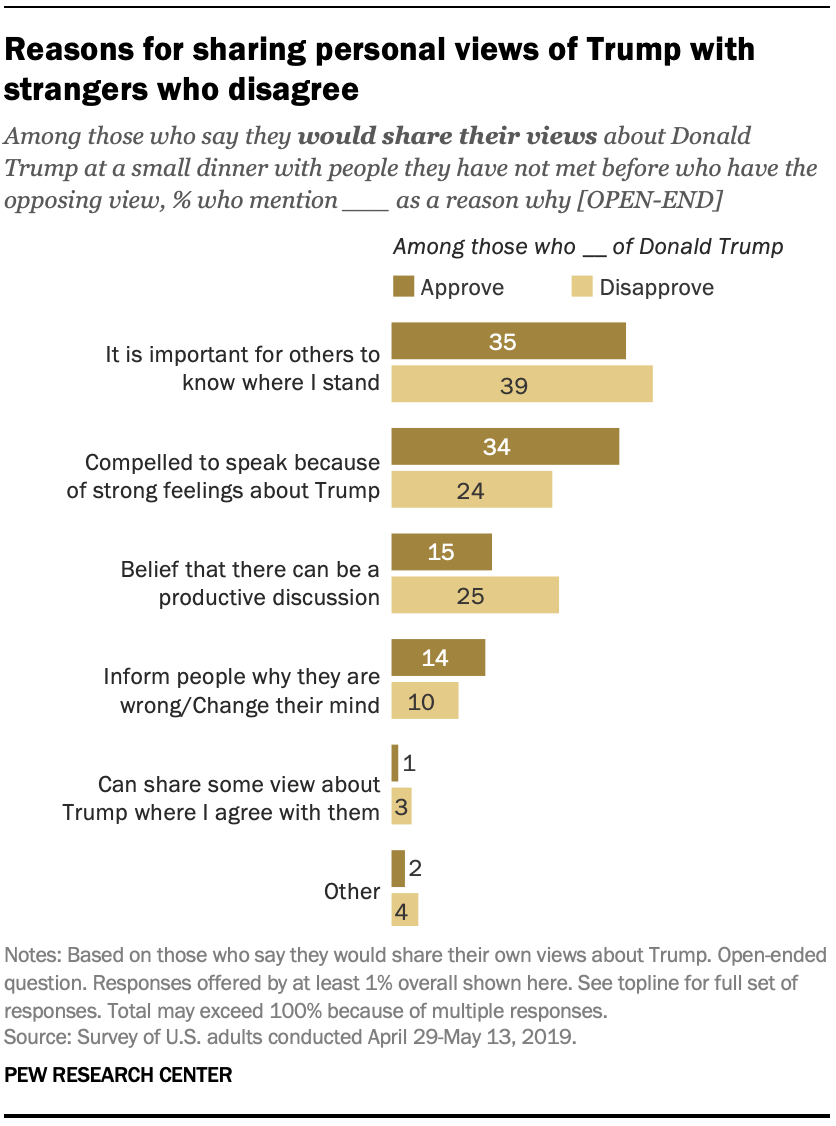 Strongly held views about the president are also mentioned by sizable shares in both groups as a reason they would speak up, though Trump approvers are more likely than disapprovers to say this: 34% of Trump approvers who would share their views in these circumstances cite positive views or praise of Trump as the reason why they would participate in the conversation, while about a quarter of Trump disapprovers who would do so (24%) mention deeply negative or strong criticism of Trump as a reason.

Among those who would share their views, 25% of Trump disapprovers and 15% of Trump approvers explain that they would do so because the conversation might be productive.

Relatively few people who would engage in a conversation about Trump with people who have a different view of him than they do would do so in the expectation that they could change others’ minds about him (10% of disapprovers and 14% of approvers who say they would share their views cite this as a reason). 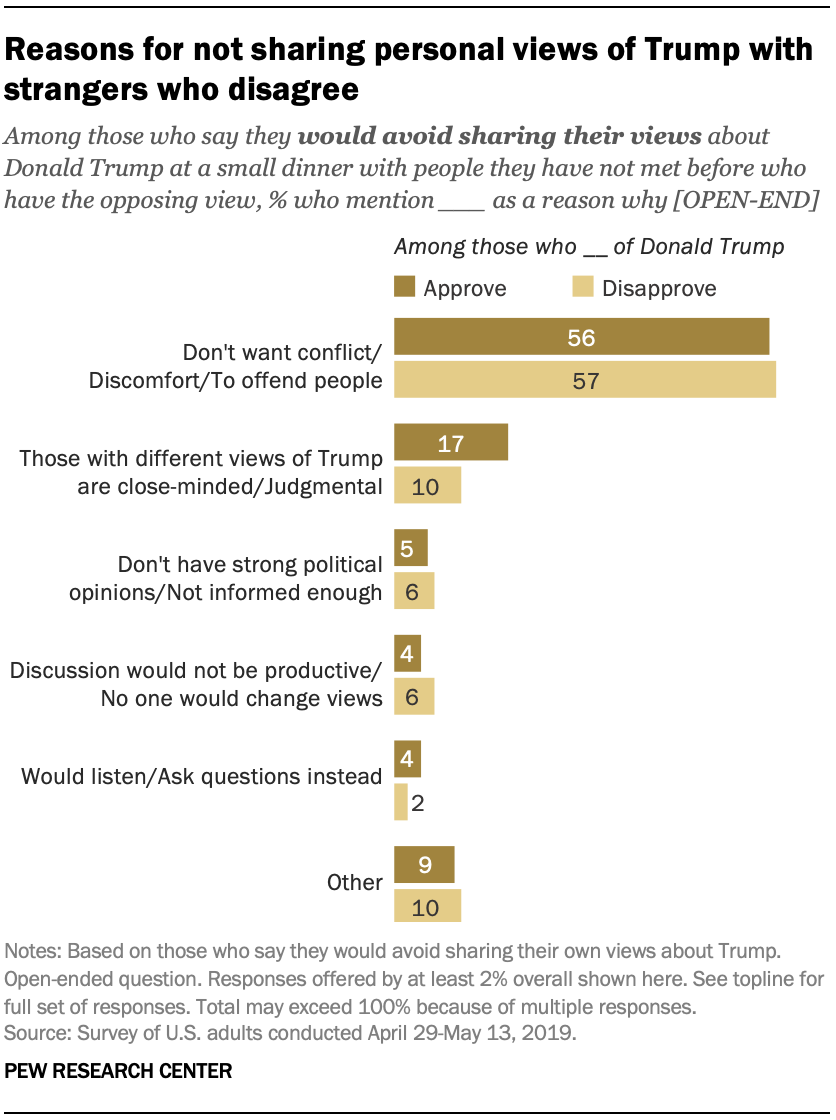 The most common reasons given for not sharing personal views of Trump at a dinner with strangers who feel differently is a desire to avoid confrontation or discomfort: More than half of those who say they would avoid sharing their views about Trump mention something along these lines as a reason why, with similar shares of Trump approvers (56%) and disapprovers (57%) saying this.

Though less common a response, 10% of Trump disapprovers who would not share their views and 17% of approvers who would not share their views cite a criticism of those who have different opinions of the president than their own – particularly a sense that these groups are closed-minded or judgmental – as their reason for keeping their opinions to themselves.

Those most comfortable with conflict more likely to be politically engaged

Those with higher levels of comfort with conflict are among the most active in politics. They are more likely than groups who are less comfortable with conflict to say they follow what’s going on in government most of the time, to say they always vote and to talk about politics frequently. 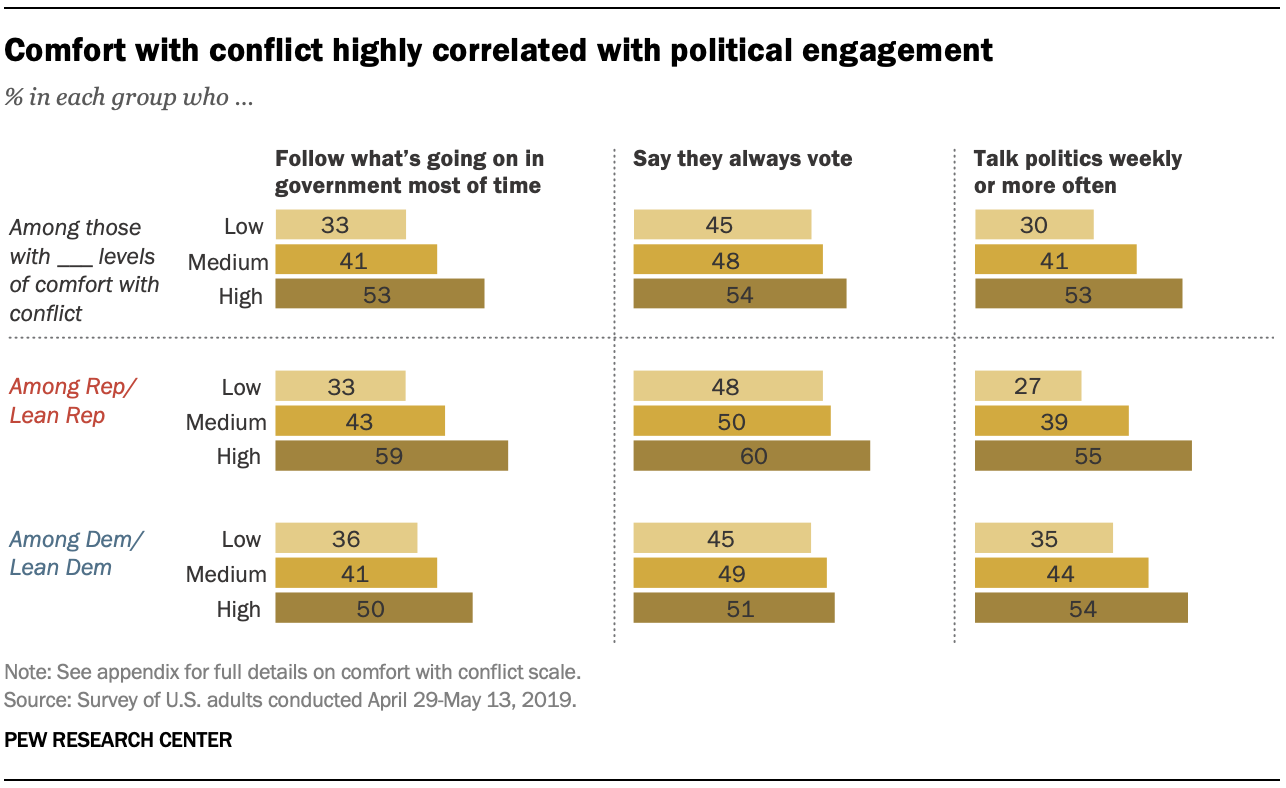 Comfort with conflict is also predictive of some other views about political discourse. For example, Republicans and Democrats with high levels of comfort with conflict are also more comfortable talking about politics with someone they do not know well. And they are more likely to say that political conversations with those who hold opposing views are interesting and informative rather than stressful and frustrating.

About two-thirds of Americans (66%) say that they do not enjoy seeing elected officials they dislike getting caught up in scandals or facing personal setbacks, while 32% say they enjoy this. 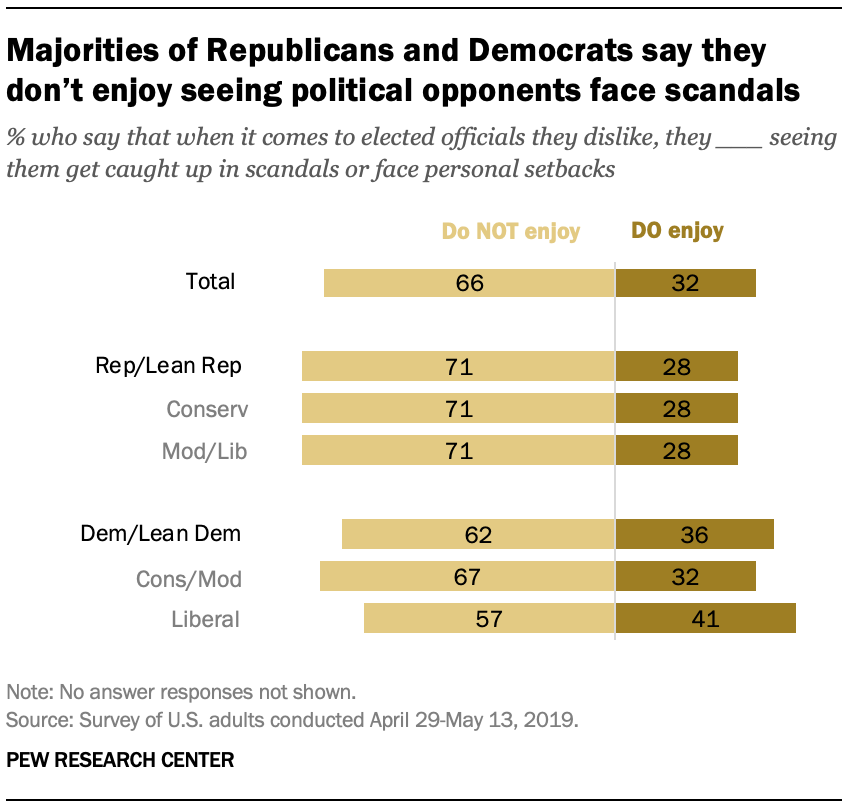 Though enjoyment at watching politicians they dislike face scandals is a minority position in both parties, Democrats (36%) are somewhat more likely than Republicans (28%) to say they enjoy this.

And among Democrats, liberals (41%) are more likely than conservative and moderate (32%) Democrats say they enjoy seeing political opponents face personal setbacks. There are no ideological differences among Republicans in these views. 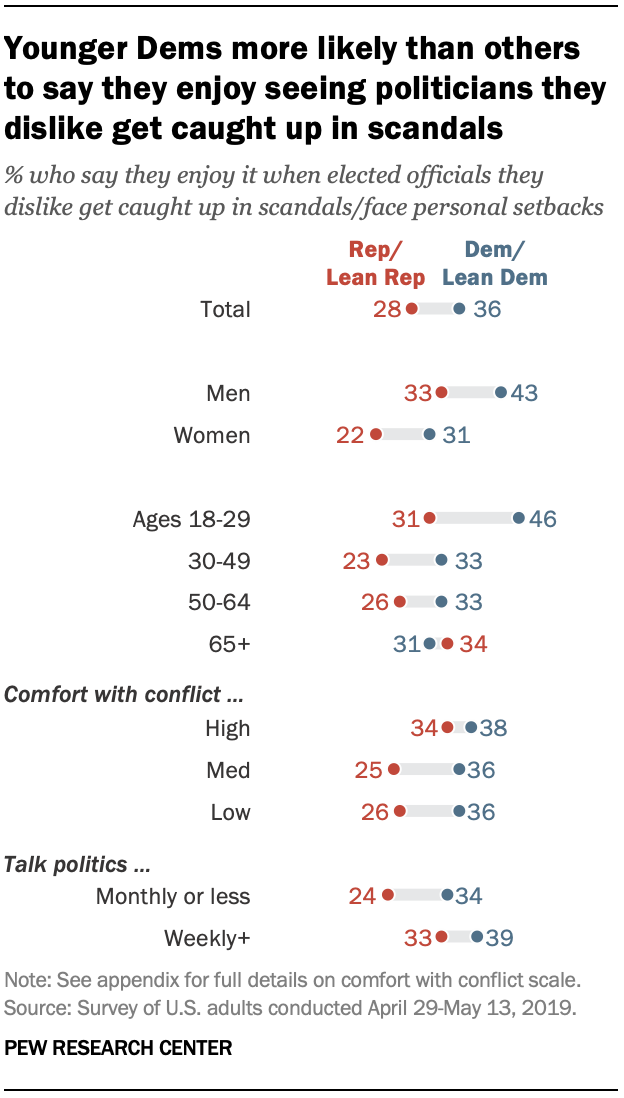 Democrats ages 18 to 29 are especially likely to say they enjoy seeing elected officials they dislike get caught up in scandals and face personal setbacks: 46% Democrats say this, compared with about a third of Democrats in older age groups.

Next: 5. The personal side of speech and expression
← Prev Page
Page1Page2Page3Page4You are reading page5Page6Page7Page8Page9
Next Page →

Public Highly Critical of State of Political Discourse in the U.S. 1. The climate for discourse around the country, on campus and on social media 2. The bounds of political debate and criticism 3. Trump’s impact on the tone of political debate, important characteristics for elected officials
4. The public’s level of comfort talking politics and Trump
Half say it is stressful to talk politics with people they disagree withOffering your views on politics – and Trump – over dinnerWhy would you participate in – or avoid – contentious discussions about Trump?Those most comfortable with conflict more likely to be politically engagedMost say they don’t enjoy seeing political opponents get caught up in scandals
5. The personal side of speech and expression 6. The challenge of knowing what’s offensive Methodology Appendix: Measures and scales